Soo Shin : The Body of A Dreamer

PATRON is proud to present The Body of a Dreamer, our first solo-exhibition with Chicago-based Artist Soo Shin. The exhibition will open to the public on Tuesday, February 2 and will continue through March 20, 2021.

Soo Shin poetically explores the gestures of a body to reveal the inner experiences of a person in relation to place, identity, and the toggled experience of being; both physically and metaphorically. Working with varied materials, such as wood, metal, clay, and appropriated personal objects, Shin creates sculpture that both visually and physically guide the viewers’ body and its movements. The work is composed of physical references to Shin’s own body, such as casts of her hands and feet; dimensions that match her physical measurements; or an attempt to capture a personal remnant of touch or a feeling. In relation to these markers, Shin draws upon the properties of a material, like the cold rigidity of steel; softness of fabric; or the palpable emotion of a seemingly quotidian object to create a poetic dialogue around our understanding of our bodies and the space we inhabit. As a first generation immigrant, Shin has experienced the body, her own and those of others, categorized and reduced to its productive value. In response, she aims to dismantle this particular narrative instead creating space for the poetic gestures that give a body its personhood and define a unique experience. 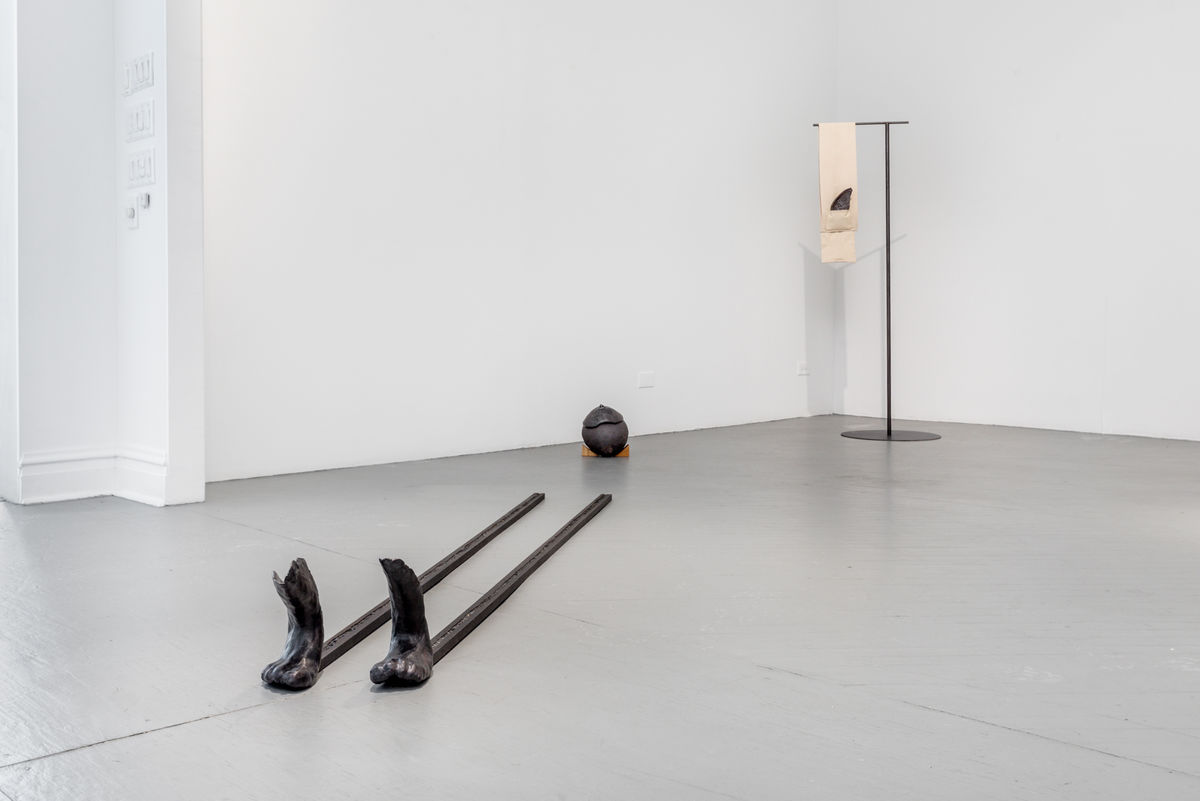 The exhibition is anchored by the title workThe Body of a Dreamer and The Body of a Dreamer (Right Hand), two sculptures that are crafted out of draped muslin, steel, ceramic wings, and concrete casts of the artist’s hands. The scale of each work, like many elements of her practice, is necessitated by the dimensions of Shin’s body or, in the case of the height of (Right Hand), an intimate space like the artist’s studio. In this work, the artist’s right hand rests in a pocket on the floor, as the fingers gesture upward guiding the eye to meet the wing on the other side of the sculpture. Similarly, in The Body of a Dreamer, muslin, cut to the length of Shin’s wingspan, holds her left hand and wing. Balanced evenly, the two moments gesture upwards and towards one another. As an artist, her hands are the vessels through which creativity, imagination, logic, and analytical thinking manifests. In the case of both works the meeting of and juxtaposition of the left and right hands with that of a bird’s wing, speaks to the separate sides of our bodies and minds, that together can take flight, representing a body that is borderless, unencumbered, and robust.”¨ 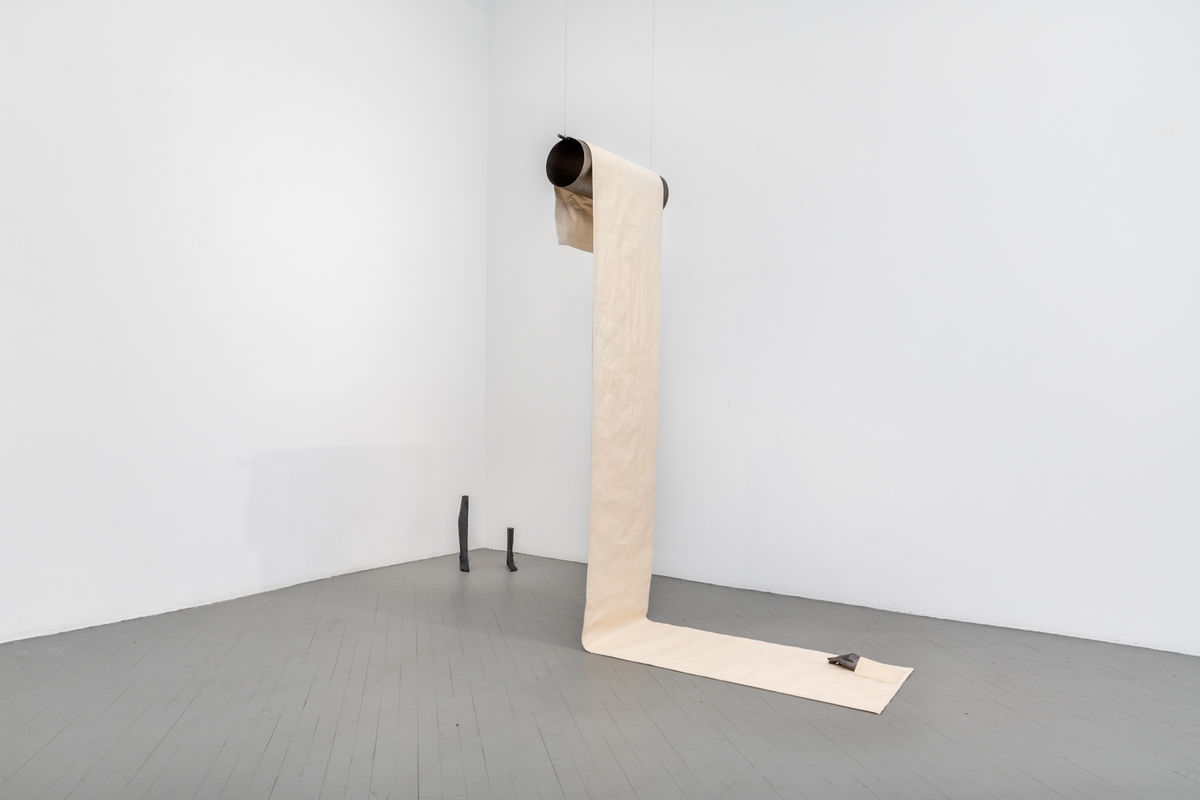 During a recent trip to Marfa, TX, Shin connected with a stranger. This woman was born and raised in Marfa and felt compelled to remain there to care for aging parents, despite the desire to move on. For A Place Between Leaving and Staying, Shin collected a fallen branch from a desert honeysuckle bush from the stranger’s garden. Applying her own hair in the form of a feather, Shin references the act of moving, flying, or leaving. Similarly, In A Breath to Memory, Shin activates the body of the viewer inviting their breath to raise a found feather that rests upon the bottom of a triangular shadowbox. Collected by a dear friend in a cemetery after the death of her father, the feather lies dormant unless activated, and the motion of its movement mimics the act of picking it up off the ground - bringing the memory and moment back to life. Through these works the body’s relation to a physical object as it pertains to empathy is explored. Shin’s approach to the intimate relationship of holding, owning, and preserving a thing that holds meaning draws attention to how our bodies have a physical connection to objects, almost as extensions of our physical experiences. We anchor meaning and memory to objects and places in order to create permanent markers from which our own personal narratives can find their way forward. 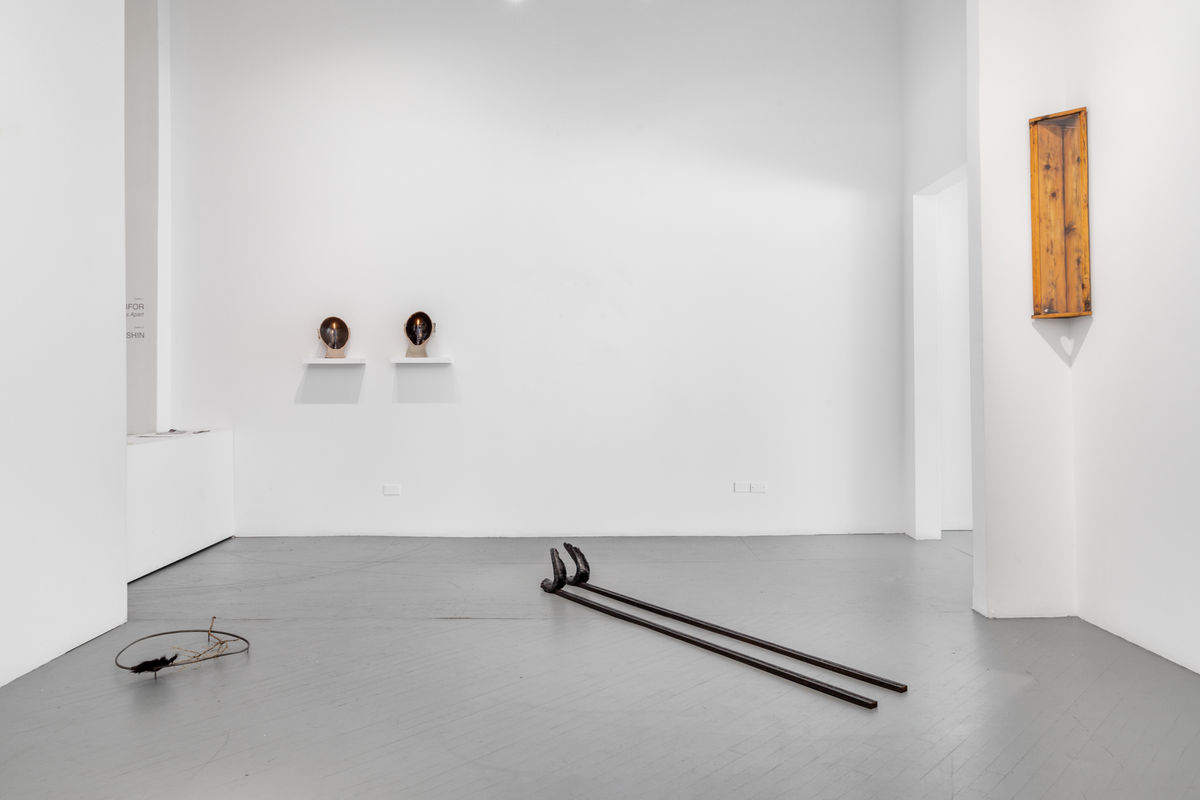 In Beacons, Shin orients two sculptural heads inwards gazing both at each other and the interior of the gallery space. Holding candles that are intended to be lit during the exhibition, the work speaks to the passion and partnership of treasured relationships. On the other hand, The Head (introspection)considers the act of meditation and looking inward. A quiet face with no eyes, the work is held upright by cedar wedges in a delicate balance. If removed, the head will roll, an apt metaphor for the tenuous nature of states of mind - easily altered, moved, or affected. 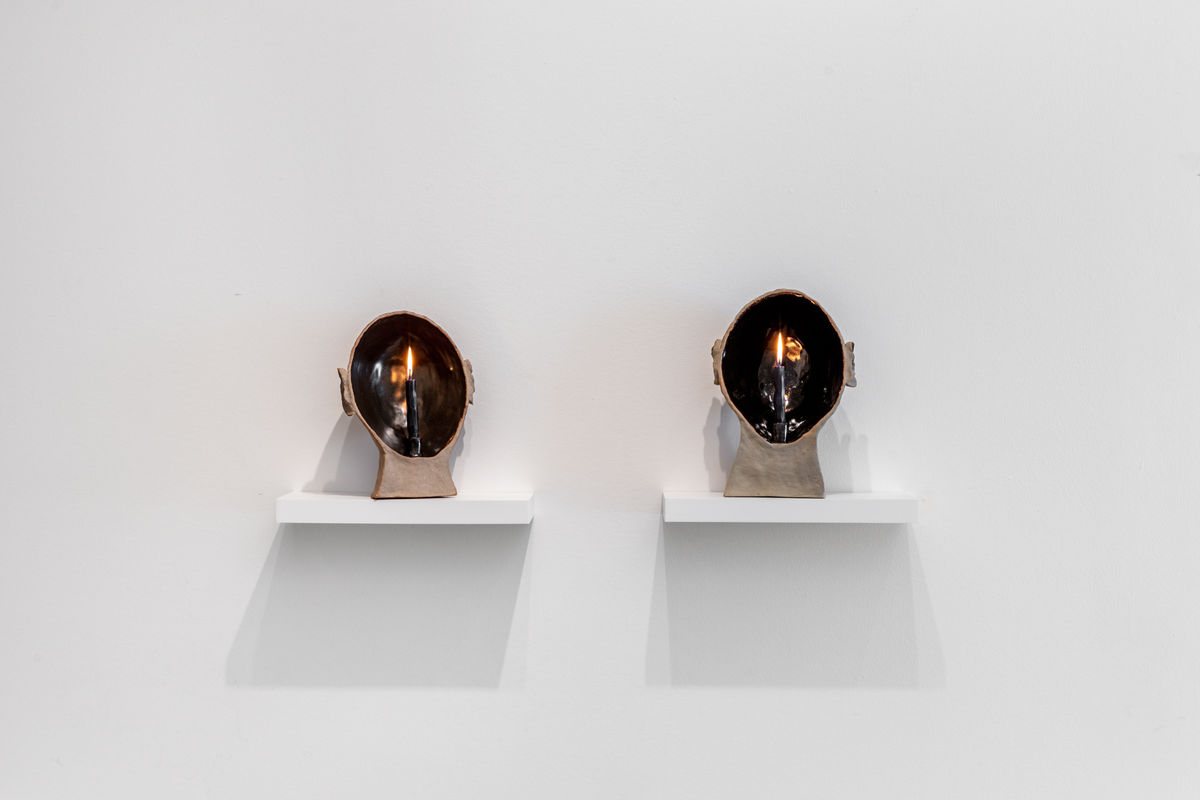 Shin’s practice often addresses notions of forward movement, as if catching the body prior to release or emphasizing the space that encompasses a body both in stasis and in action. In Here,two cross-sectioned feet stand against the back wall of the gallery, evoking a still body, but one that is on the precipice of moving forward. Similarly,To Leap positions two ceramic feet on the carved paths of ebonized oak. The feet made with clay pressed against her ankles bent forward mimics the gesture of crouching before jumping. The hand-carved paths match the length of Shin’s extended body and are filled with metal dust gathered from the act of making, taken off of the shop floor. 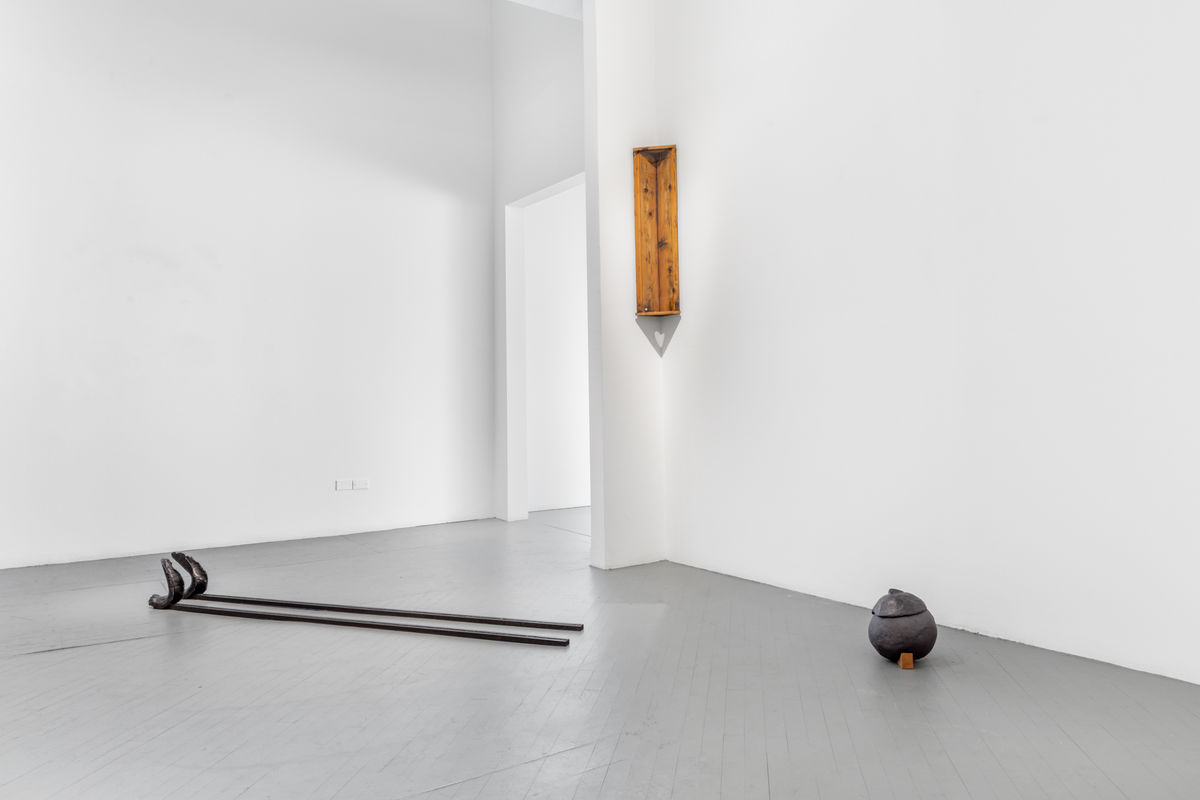 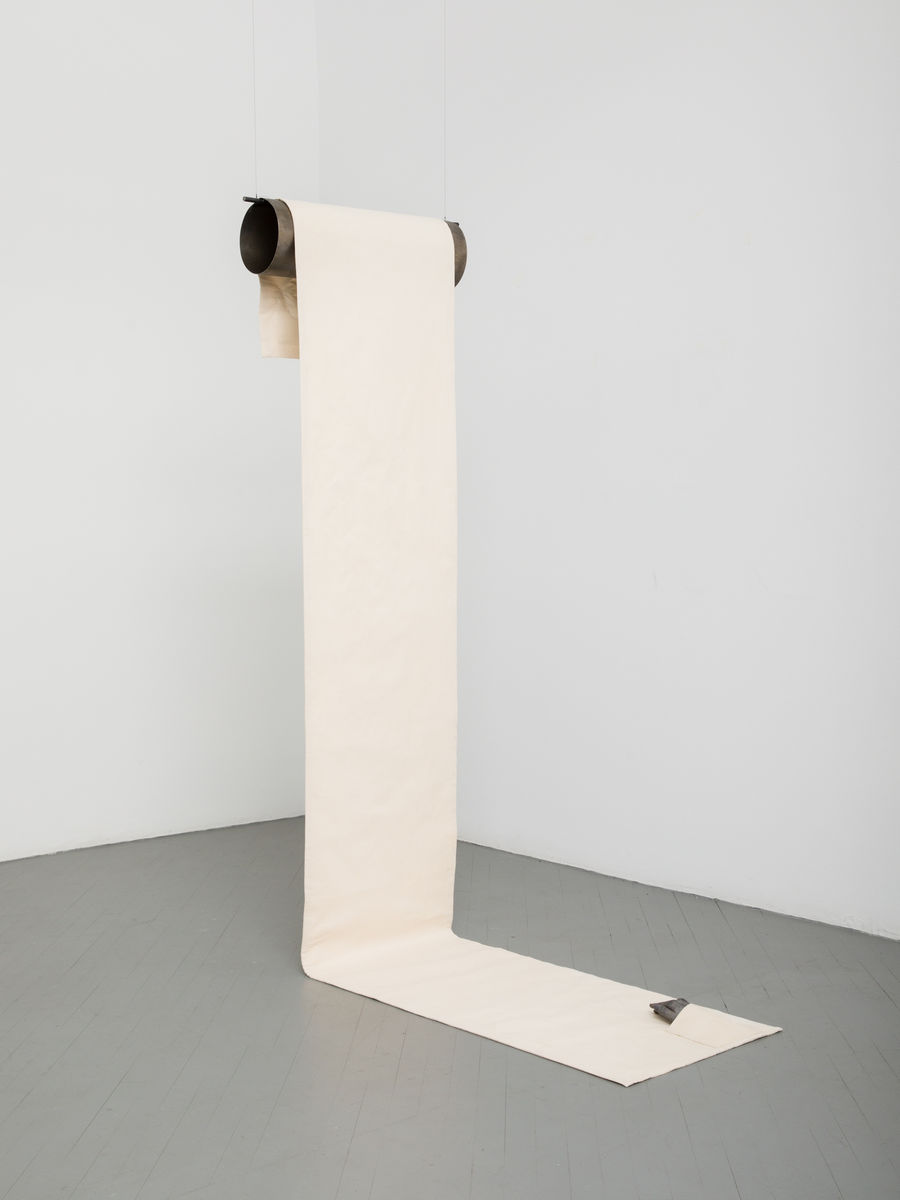 The Body of A Dreamer (Right Hand) 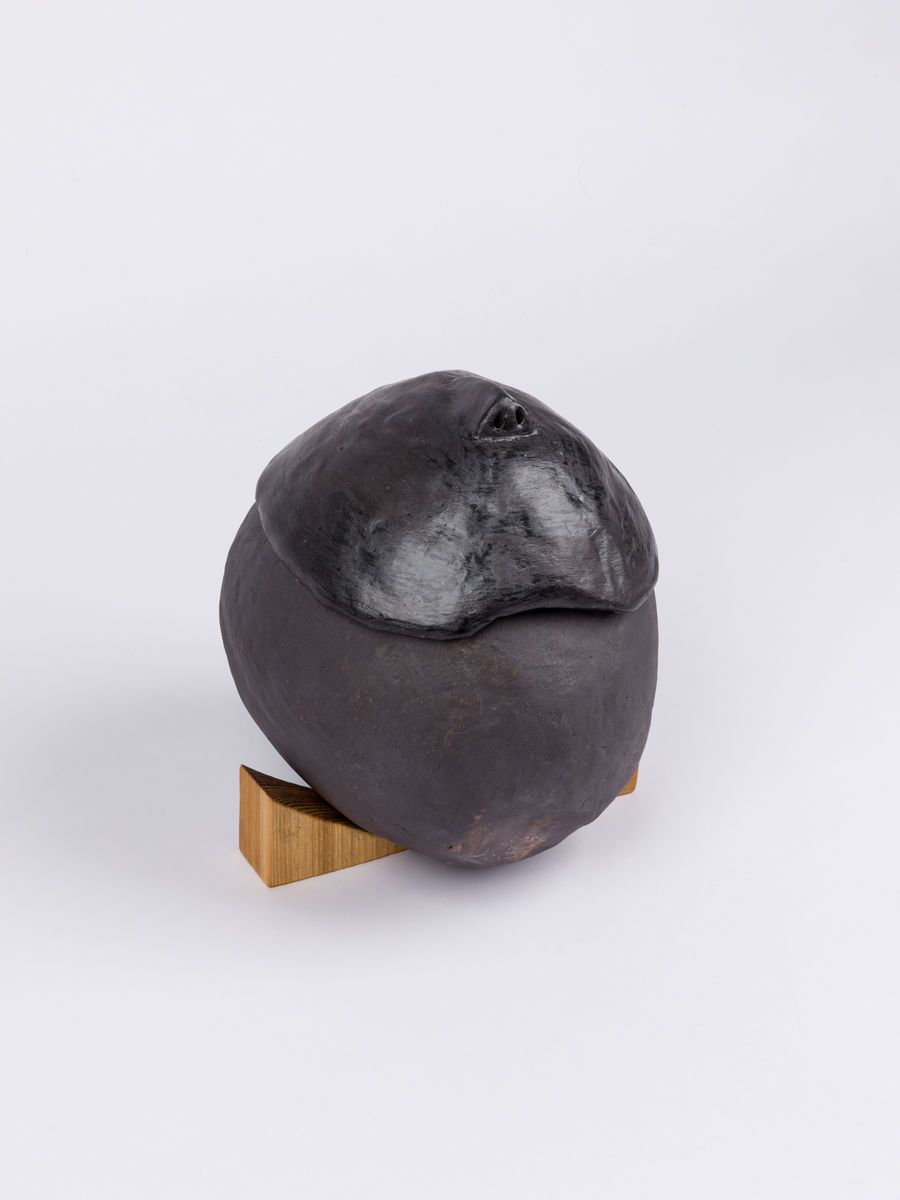 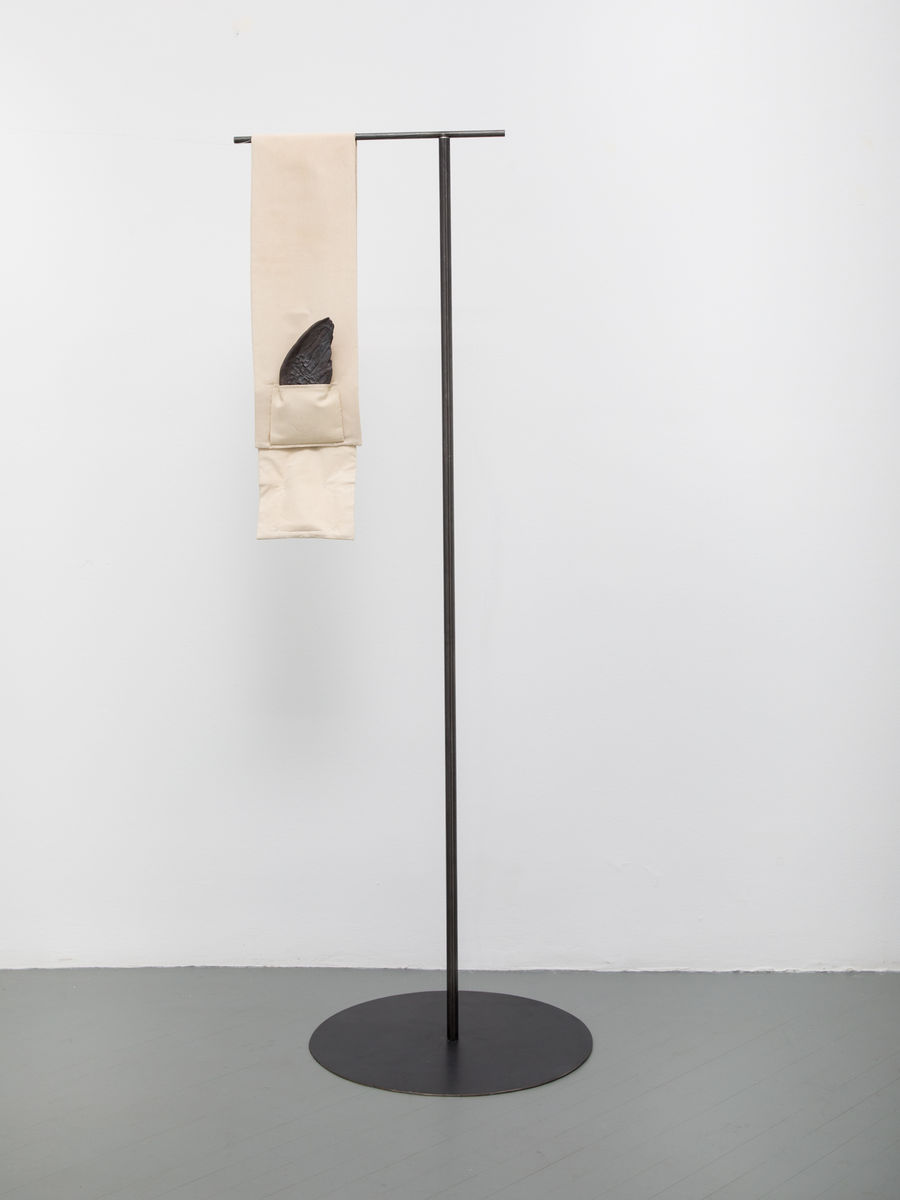 The Body of a Dreamer 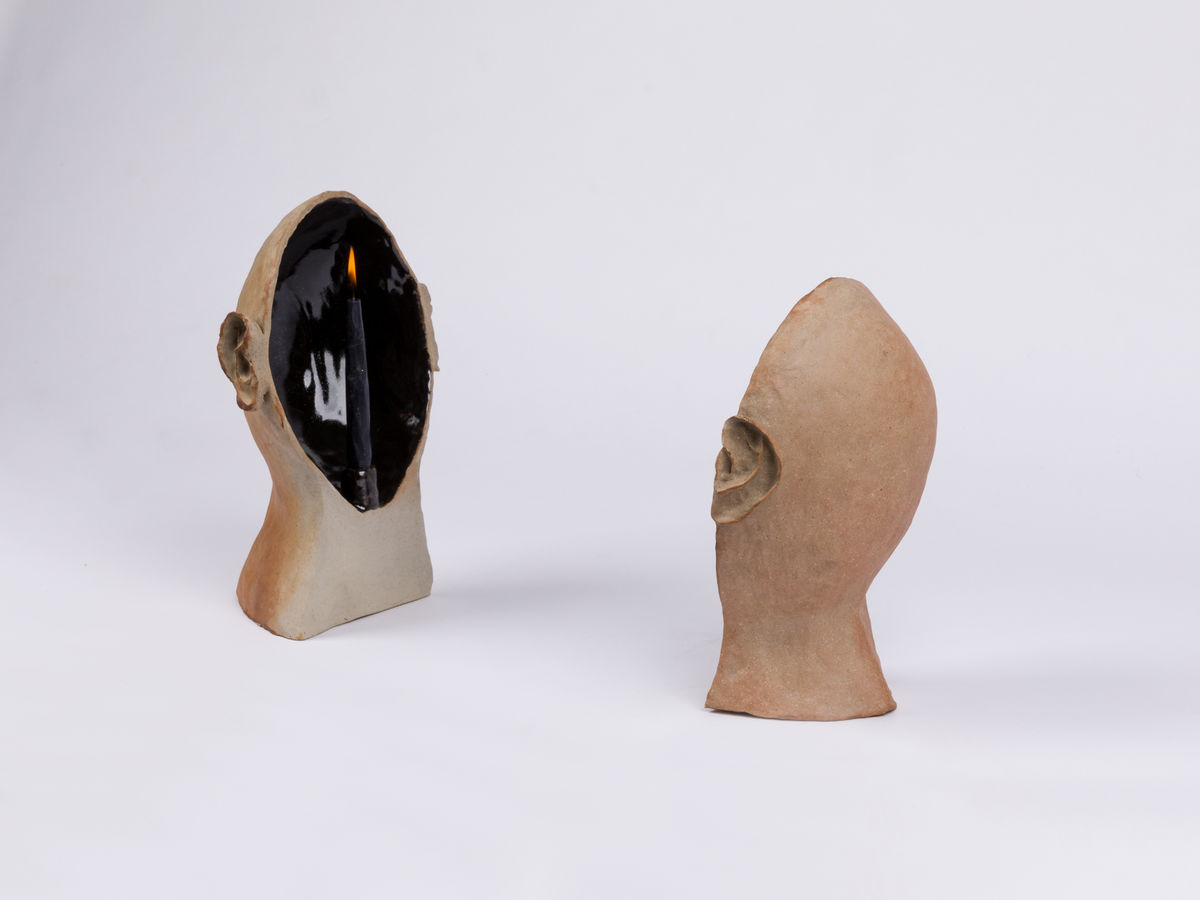 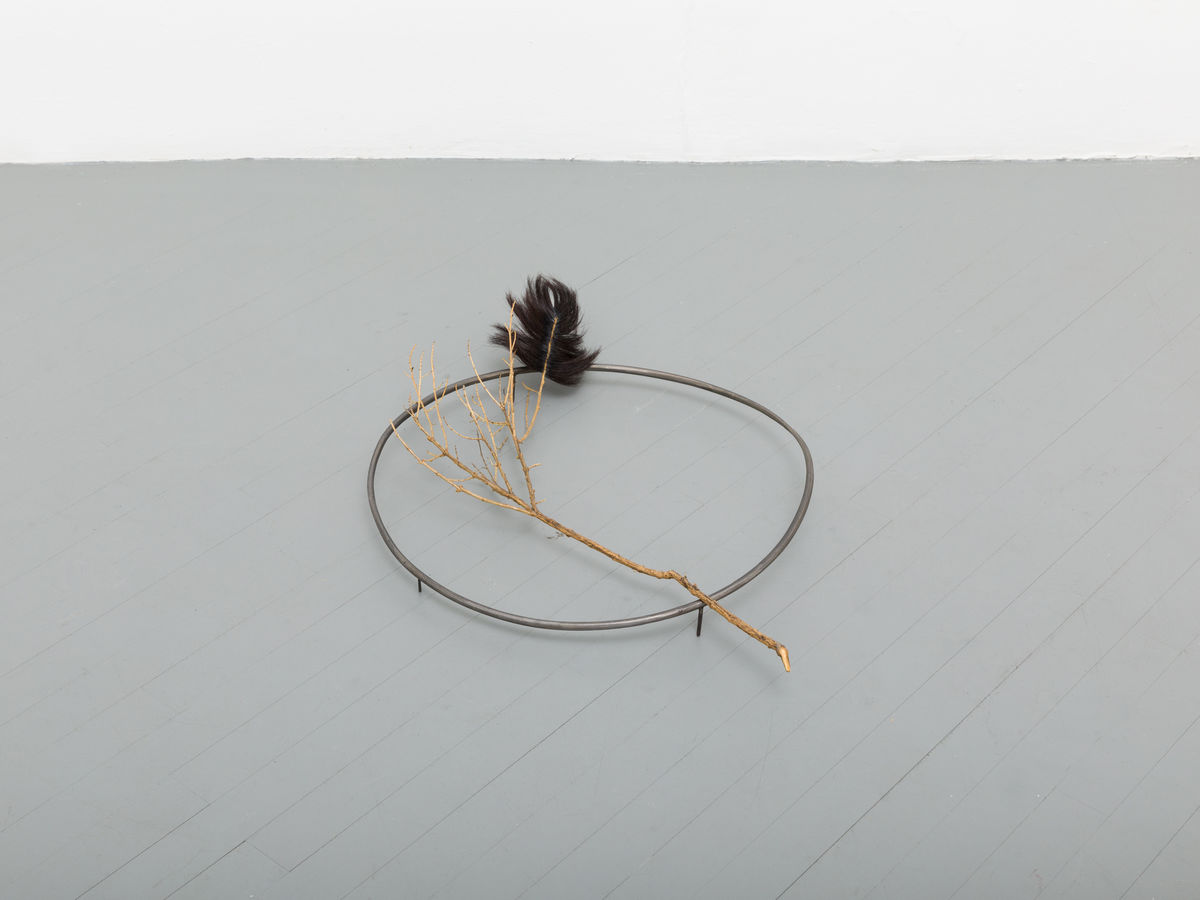 A Place Between Leaving and Staying 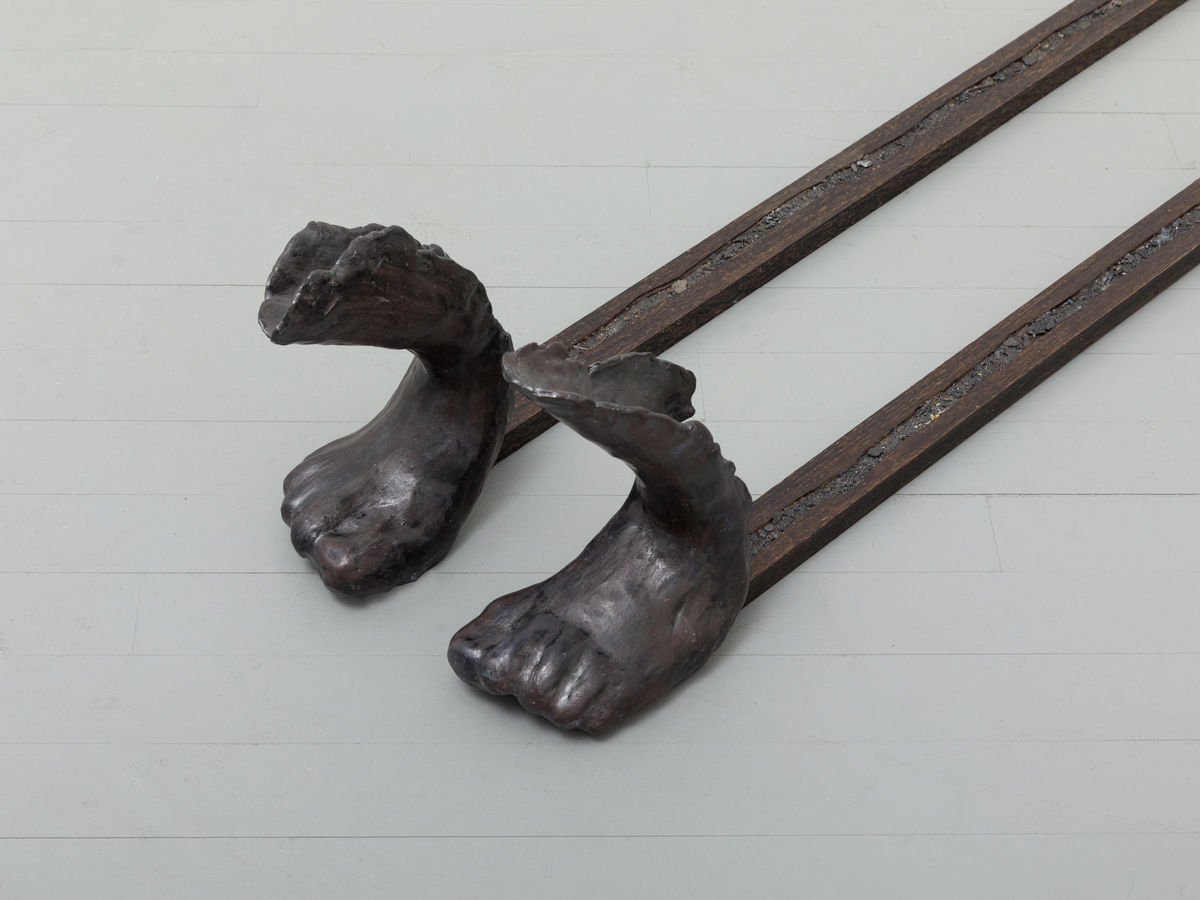 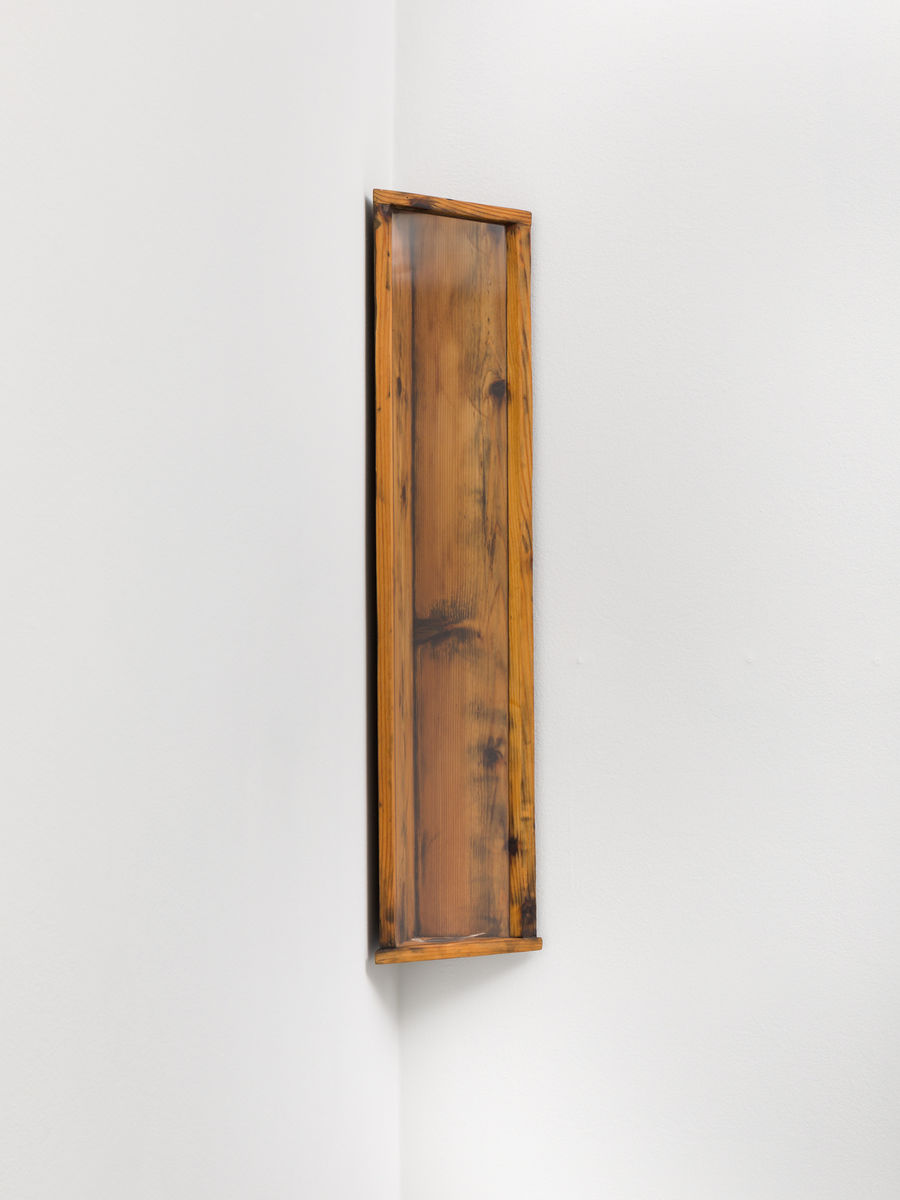 A Breath to Memory (Lauren’s Feather) 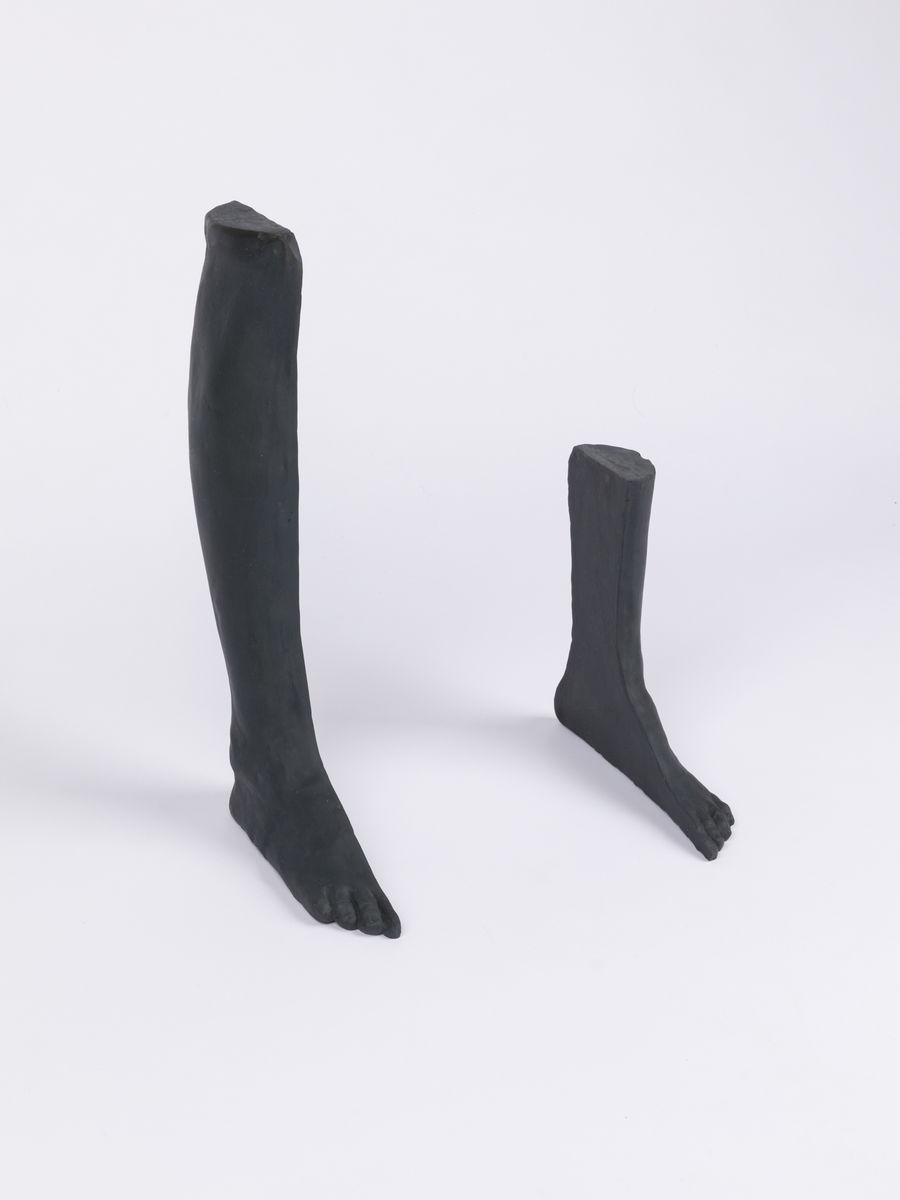 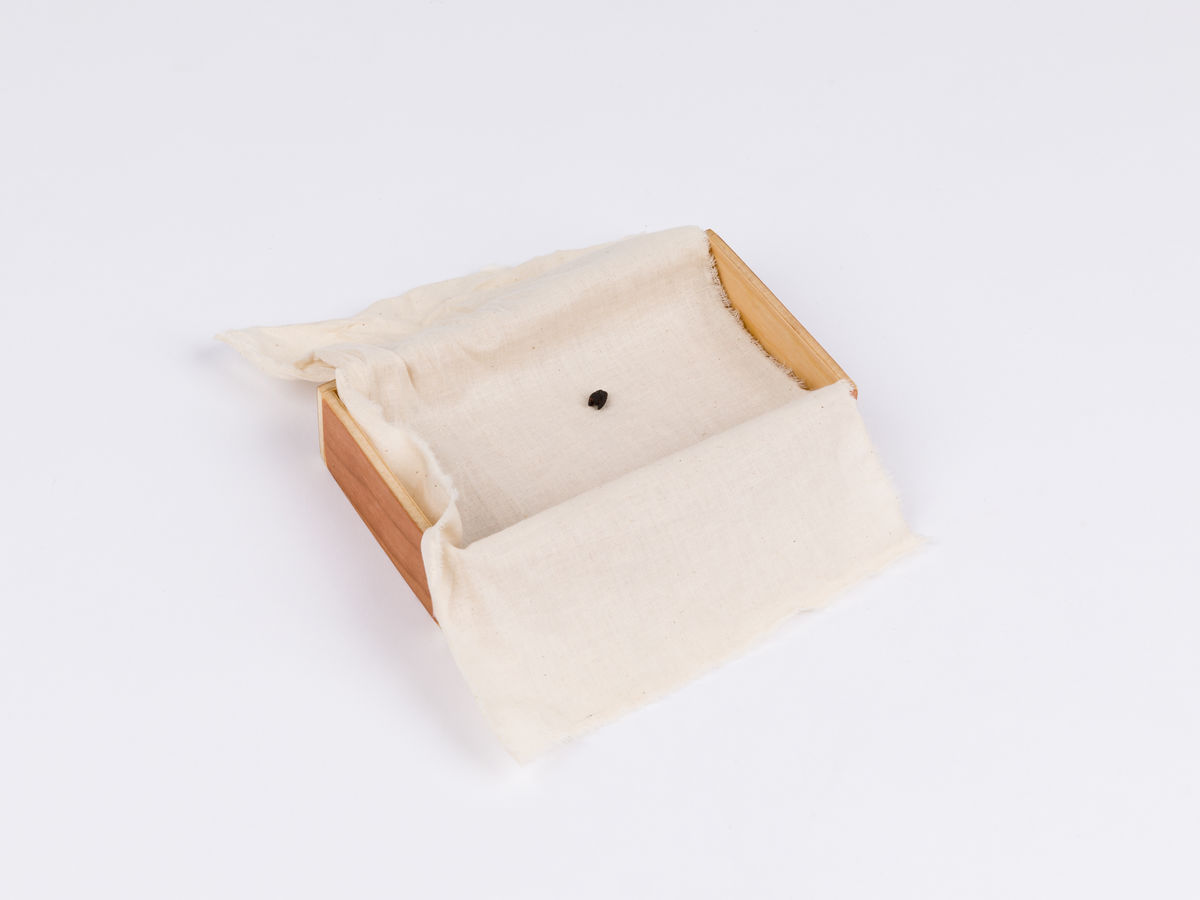 The Body of a Fly