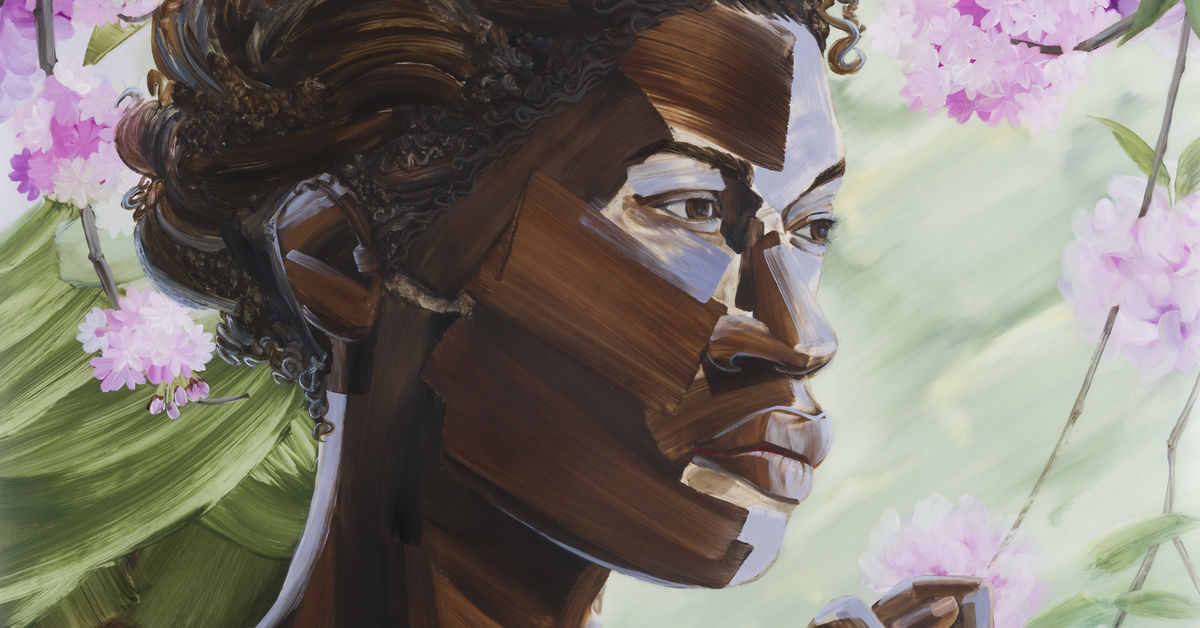 Twenty-seven bold new contemporary works of art —a recent gift to the Columbus Museum of Art —provide a snapshot of what a group of diverse American artists are creating these days.

The Scantland Collection, recently given to the museum by members of the Scantland family of central Ohio, is on view in the exhibit “Present Generations” on the second floor of the Walter Wing at the Downtown museum.

Created by 27 living artists, the paintings, photographic works, installations and sculptures represent the wide-ranging interests of the collectors (especially Pete Scantland, founder and CEO of Orange Barrel Media) as well as the artistic and societal interests of the artists.

“In calling the show ‘Present Generations,’ there’s a feeling that this is really up-to-the-minute work that is coming into the museum and yet will be here for generations,” Cann said.

Intriguingly, in their pieces, many of the young artists have referenced famous artists or art works, including some of those already in the museum collection.

Jerrell Gibbs’ big and colorful “Lady in a Blue Dress” was inspired by, among others, two Henri Matisse works in the museum collection, “Lorette in a Red Jacket” and “Woman by a Window.”

Equally flamboyant in its size and colors is Hilary Pecis’ acrylic still life “Tulips, Ranunculus and Oranges,” also paying homage to Matisse and especially the 1992 retrospective at the Museum of Modern Art in New York, referred to by Pecis with a copy of the poster in the background of her painting.

Portraits include Greg Breda’s beautiful acrylic depiction of an African American woman with a contemplative expression on her face and positioned against a background of cherry blossoms. The painting’s title, “What Shall I Cry?,” refers to a biblical passage from Isaiah regarding the fleeting nature of life on Earth.

Coady Brown’s oil portrait “Hypnosis” is a mesmerizing scene of a seated woman, her eyes closed, one arm folded over her head and the other propping her up. Her orange shirt is filled with an optical-illusion design that furthers the movement and hypnotic nature of the work. 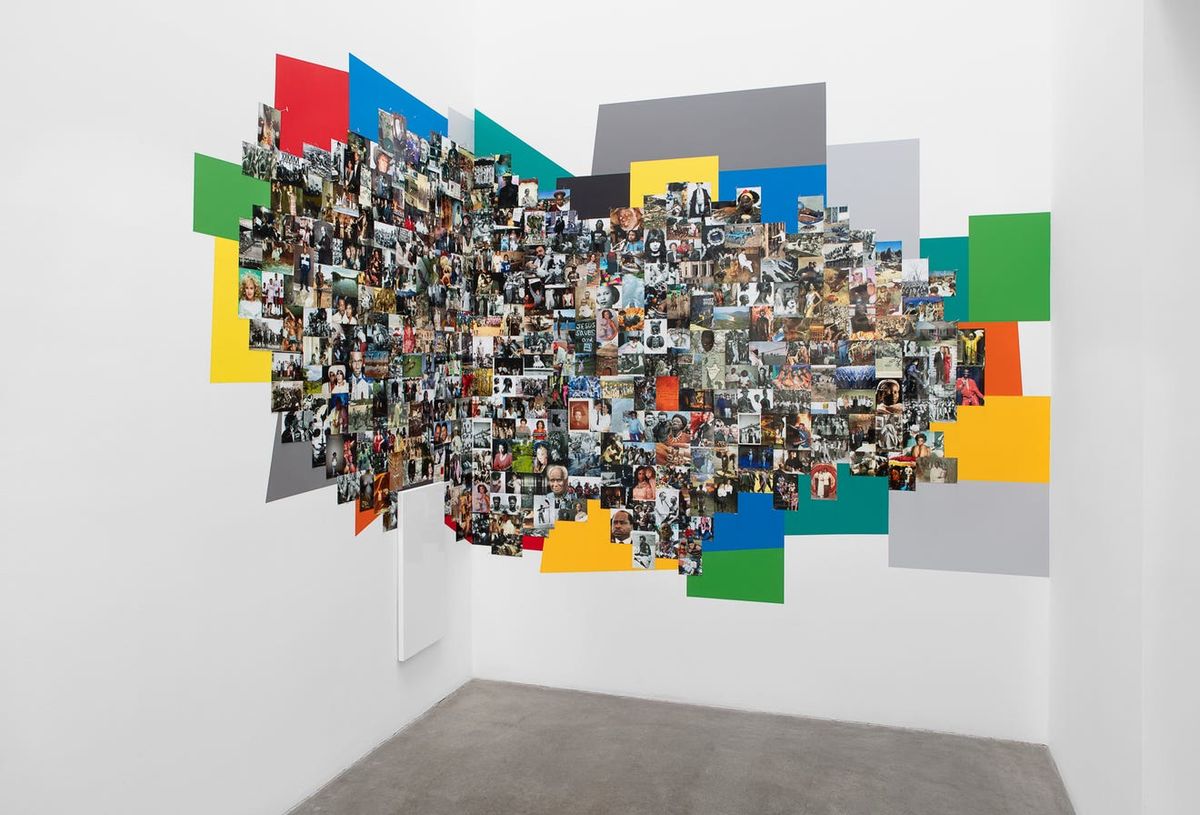 Deana Lawson’s “Assemblage” recalls the 1995 “The Family of Man” exhibit of hundreds of photographs. Lawson has put together hundreds of small drugstore photos of people —some famous, some infamous and many not famous —in an installation that rounds a corner and is positioned against the backdrop of the 1995 exhibit catalog cover. Lawson’s “family of man” is a more diverse and contemporary snapshot.

In his installation “Stockroom Ezekiel,” Derek Fordjour pays tribute to Ezekiel Archey, a Black man born into slavery who served time in prison as well as in hard labor in a Birmingham, Alabama, coal mine. Visitors walk into a room filled with hundreds of small wooden cells, all filled with blinking lights, human busts, cameras, clocks and many, many balls, suggesting games of chance.

In her two small paintings, “Double Sun Shoal” and “Double Sun School,” Emily Mae Smith makes observations on women in art. In each painting, twin suns preside over fish in the sea; somehow, the suns begin to look like women, almost winking at viewers.

All exhibit works are accompanied by thoughtful and informative labels, acquainting viewers with the artists and adding context to the viewing experience.

Museumgoers can expect to see more such art. The Scantland family has promised to continue to give works to the museum in what is an “ongoing relationship,” Cann said. 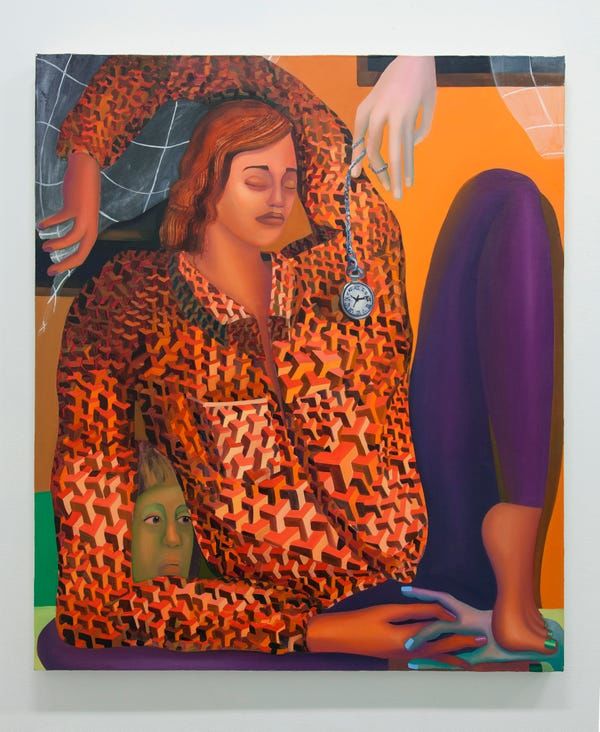 While it is impossible to predict how individual artists’ careers will play out and how historically significant they will become, the 27 works in the current exhibit capture what many artists have been thinking at the beginning of the 21st century.

“I hope that when people walk through this exhibition they get a sense that they’re seeing something for the first time that maybe their grandchildren or great-grandchildren will also get to experience at the museum,” Cann said.