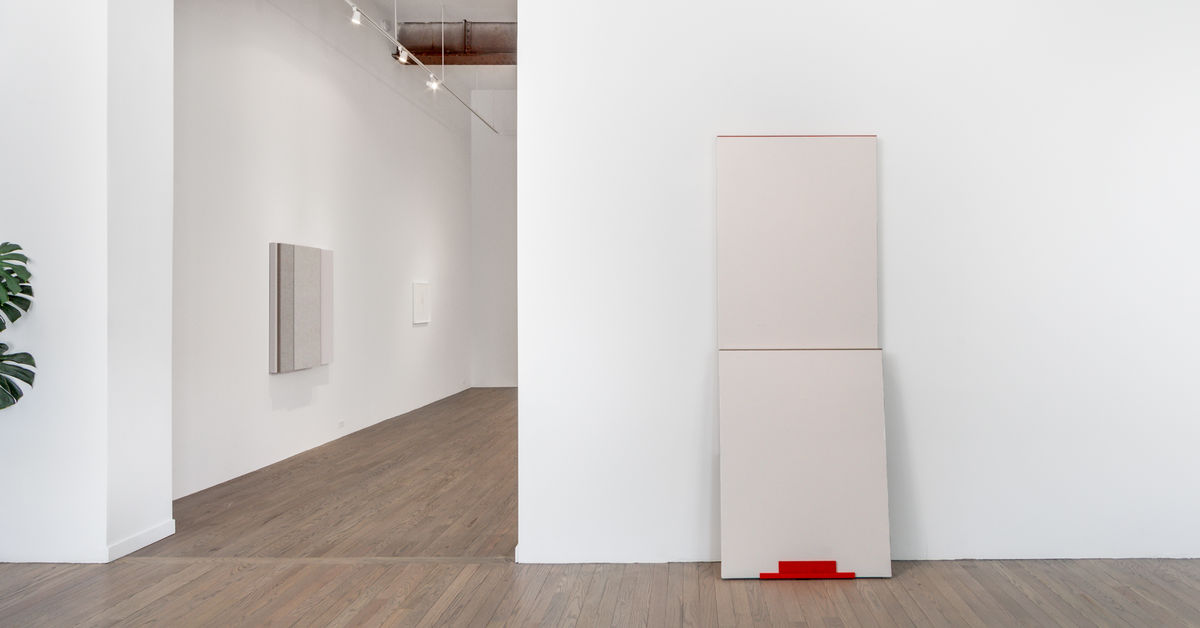 PATRON is proud to present our second solo exhibition with artist Jennie C. Jones. The exhibition titled Nocturnes opens to the public Saturday, June 4, 2022 and continues through July 16, 2022.

The predominance of the eye over ear.
The mind’s eye, the mind’s ear…

A generosity in a refusal.

And here we begin at night. Black is the abundance of color, the concentration of color, the dense vibration of everything all at once. For her second solo exhibition with PATRON, Jennie C. Jones’ exhibition Nocturnes presents paintings and works on paper that extend key tenets from her recent solo show at the Solomon R. Guggenheim Museum. Nocturnes is a term she employs both to refer to a music composition evocative of night (a notable example being Felix Mendelssohn’s Nocturne from A Midsummer Night’s Dream (1848)), as well as to the history of painting depicting landscapes at night, such as J.M.W Turner, Fishermen at Sea (1796), or Edwin Landseer, Scene from A Midsummer Night’s Dream. Titania and Bottom (1851).

Jennie C. Jones’ approach to painting combines the historic and aesthetic expressions of Minimalism and abstraction. Materials such as acoustic panels and architectural felt point to the capacity for painting to create aural environments. She layers and melds these materials often used for sound proofing recording studios and constructing instruments to not only become signifiers for sound, but also actively engage with and challenge the viewer. She asks them not only to look at a painting, but to listen to it. On approaching these works, even one’s breath as they near the surface of the composition becomes dampened, muted. Each swath of fiber operates like a confident brushstroke. She pares down color palettes to nearly monochromatic fields of seductive grays, moody blacks, subtly off-white tones replete with quiet pinks and taupe lavenders, and at times mercurial reds. Sharing a deep kinship with the formal “economy of means” imbued by the work of Agnes Martin, Jones’ work keys into the sentiment “the value of art is in the observer.” The restraint offered by minimalist conventions allows the work to become a mirror of self-perception. 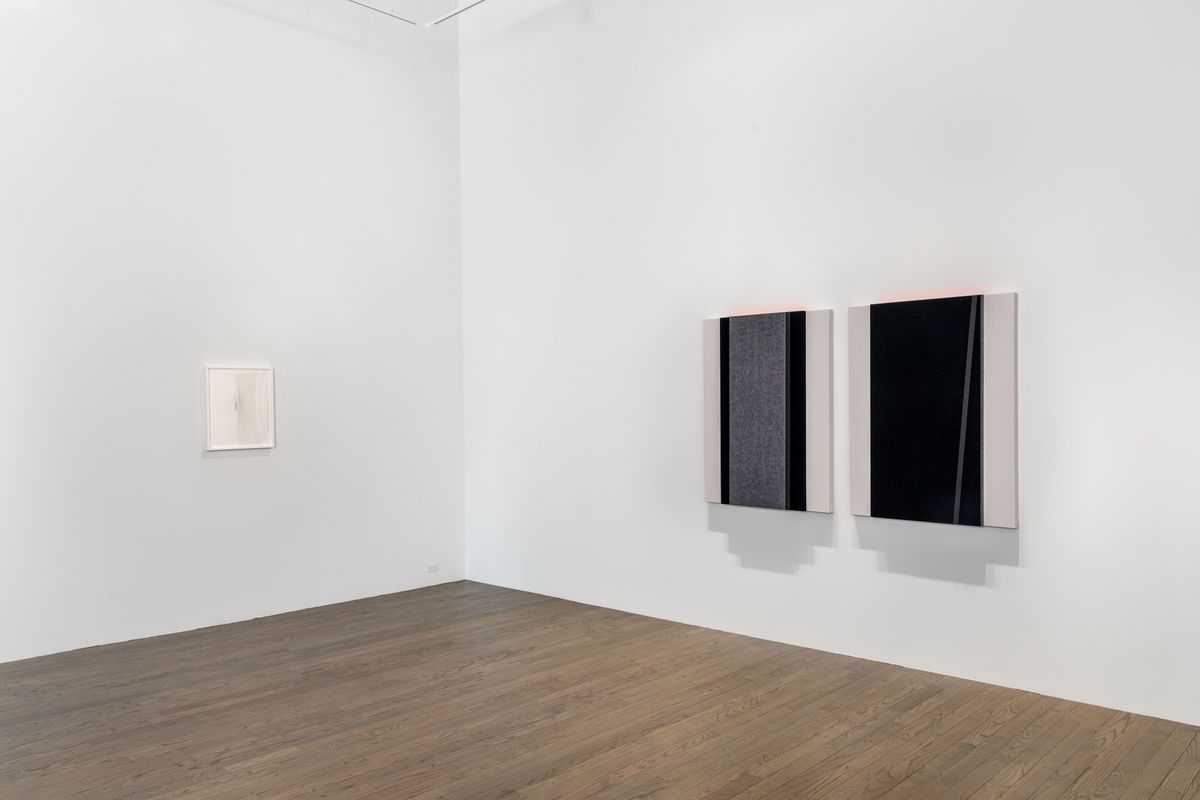 Included in the exhibition is the diptych Nocturne 1 & 2 (2022) marking the artist’s return to using black in her paintings since 2021. Part one of the diptych layers grey architectural felt over a solid black acoustic panel which rests on the white surface of a painted stretched canvas. As one looks at the sides of the painting, there is a crevice between the layers of fibers where one of the surface sheets hangs over the other one below it. This creates a thin vertical shadow. Here now shadows behave like paint. Part two of the diptych operates similarly, but with a large central black acoustic panel functioning as the support for a register of grey felt that includes what the artist calls the “crescendo line,” a strip of diagonally oriented felt on the very top layer which demarcates movement within the picture plane. Both components of the diptych incorporate Jones’ signature “hums”—a term she uses to refer to the hot red edges of the canvas that she has painted to cast a warm crimson hue against the white wall behind it. Jones’ hums are a punctuation of hard-edge halos that signal to the viewer/listener that things are happening beyond the picture plane, beyond the ocular.

Frequently borrowing her visual metaphors from experimental structures in Jazz, the works demonstrate a building up of the surface of the canvas, an accumulation of acts, something akin to improvisation in music realized as an attitude of form. This surface tension is inching towards four dimensions. Each painting becoming a container for a series of edges. Visual instruments in between some sort of shadow play. 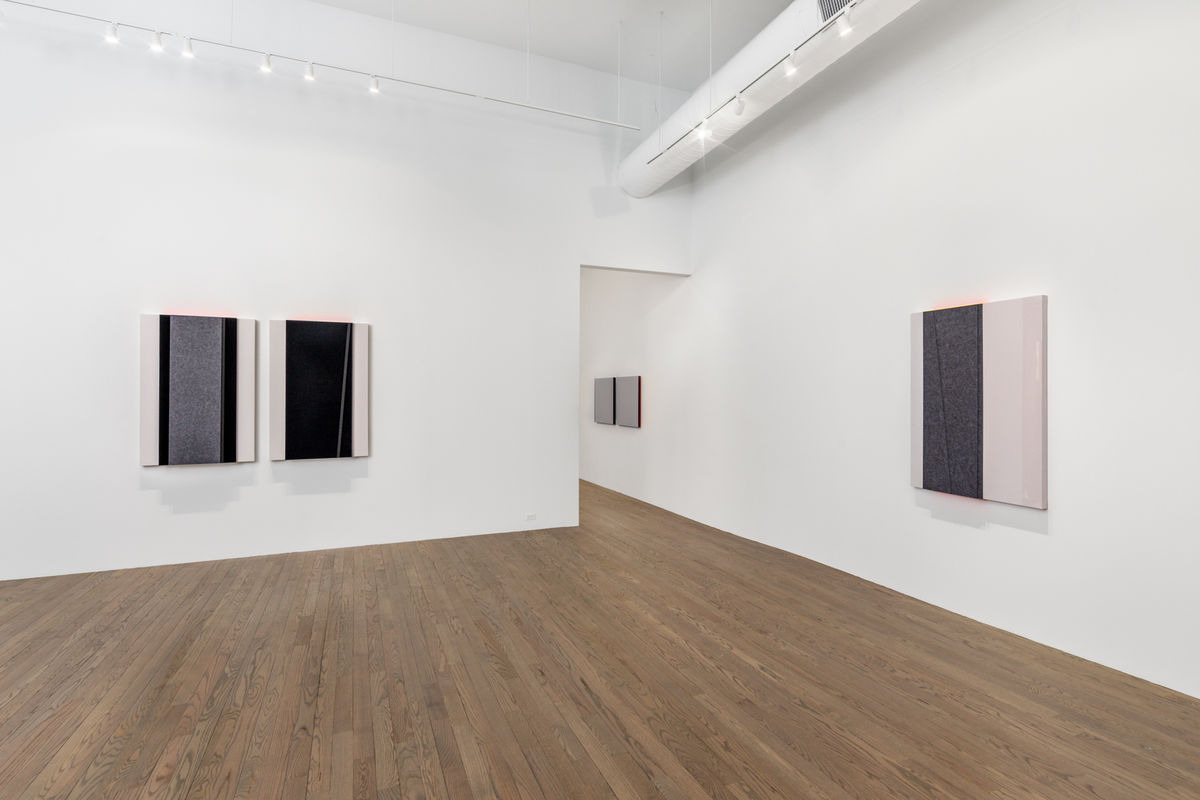 Untitled: Nocturne with Shifting Tone (2022) and Dawn Hum (2022) are Acoustic Panel Paintings that revisit moments found in earlier works like Emanating Hum (2016). In these works, gestural aspects push towards the foreground expressing opaque layers of grey and off-white acrylic paint on the surface of the canvas. Producing contrast against the solid visual character of the felt and panel portions of the composition, Jones’ broad, downward brushstroke stretches a single line from the top to the bottom of the work. This approach subtly highlights the warp and weft of the canvas. Her decision to reveal the layers of paint forms consonance with the slippage between panels and felt.

Phrasing to the Floor, Pedal Variation (2022) is an on-going series of vertically oriented, two panel pieces that meet between the wall and the floor. These works were first presented in her solo exhibition at the Arts Club of Chicago in 2020. Jones explains, “A phrase in music is more or less a sentence and for me phrasing to the floor means giving it your all, your breath, notes, energy until it becomes grounding…‘Phrasing to the floor’ is also a natural next step or gesture in terms of how I process the objecthood of painting.” Within the history of art, something fundamentally shifts when painting attempts to leave the wall, recalling Eva Hesse’s sculptural frame with an element that whips towards the viewer in Hang Up (1966). The canon of art history suggests that the objecthood of painting needed at some point to collapse the divide between artwork and viewer. Phrasing to the Floor posits the question: Is the wall supporting the objecthood of the painting, or is the painting supporting the “spacehood” of the wall? Within this vein, Jones further complicates this line of inquiry as it pertains to the predominance of viewing over listening. 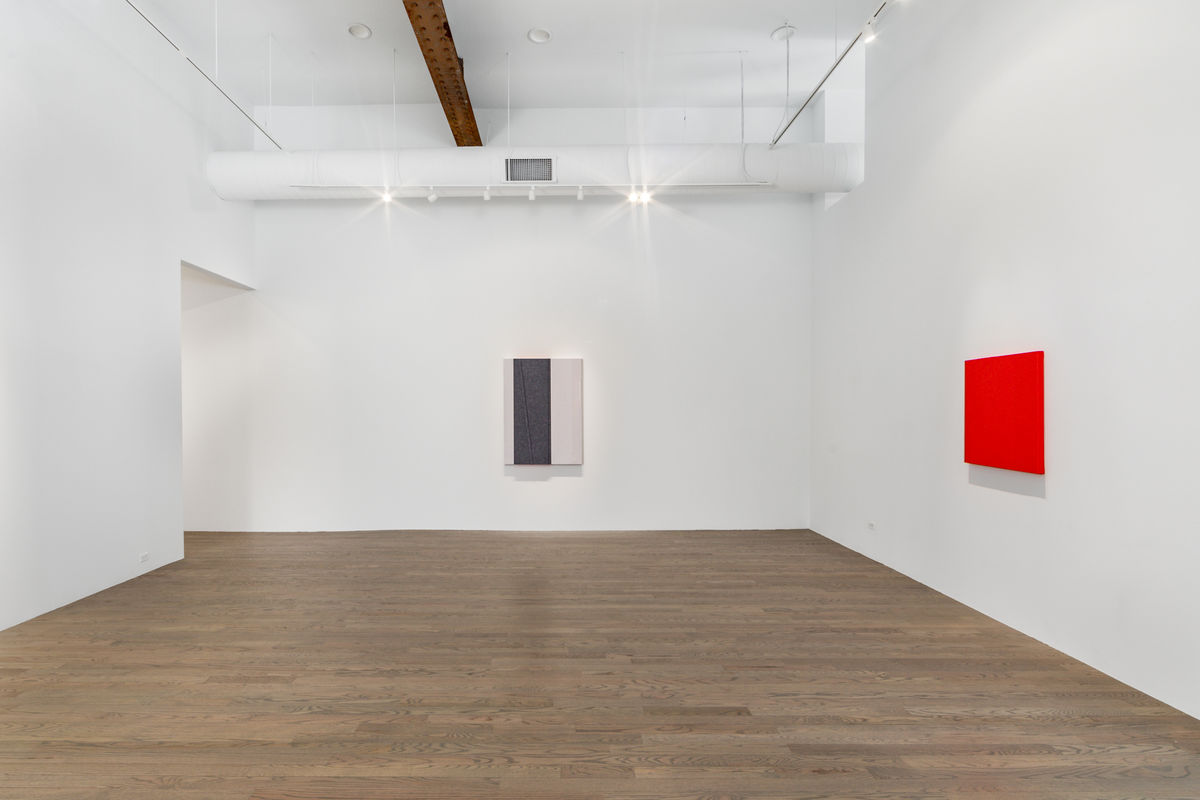 If her “hums” tend to be punctuation marks, Sweeping Red Tone (all in the break) (2022) is the culmination of all hums. It is the first larger scale gestural red painting that she has made since 2016. The color red for Jones embodies multiple signifiers. Red here alludes to the colored light that turns on in a sound booth when recording begins. It signals silence. In the field of physics, red wavelengths are longer wavelengths, a longer distance between light and the eye. The wash of red paint on the right side of the work nods to sound waves as well as Abstract Expressionism. Strips of felt painted hot red rest on the sides of the canvas, activating a type of peripheral vision. The two pieces nearly touch but seem to emphasize the space between them. This “break” is an homage to Fred Moten’s text, In the Break: The Aesthetics of the Black Radical Tradition (2003). The refusal is in the restraint, in the break, in the moments where two edges don’t touch. When this happens in a musical composition, it holds the energy of the audience in suspense within the pause, within the shift between movements. Jennie C. Jones’ practice is thinking through the edges and breaks. Surfaces are building towards the viewer/listener, crescendos rising, nocturnes falling.