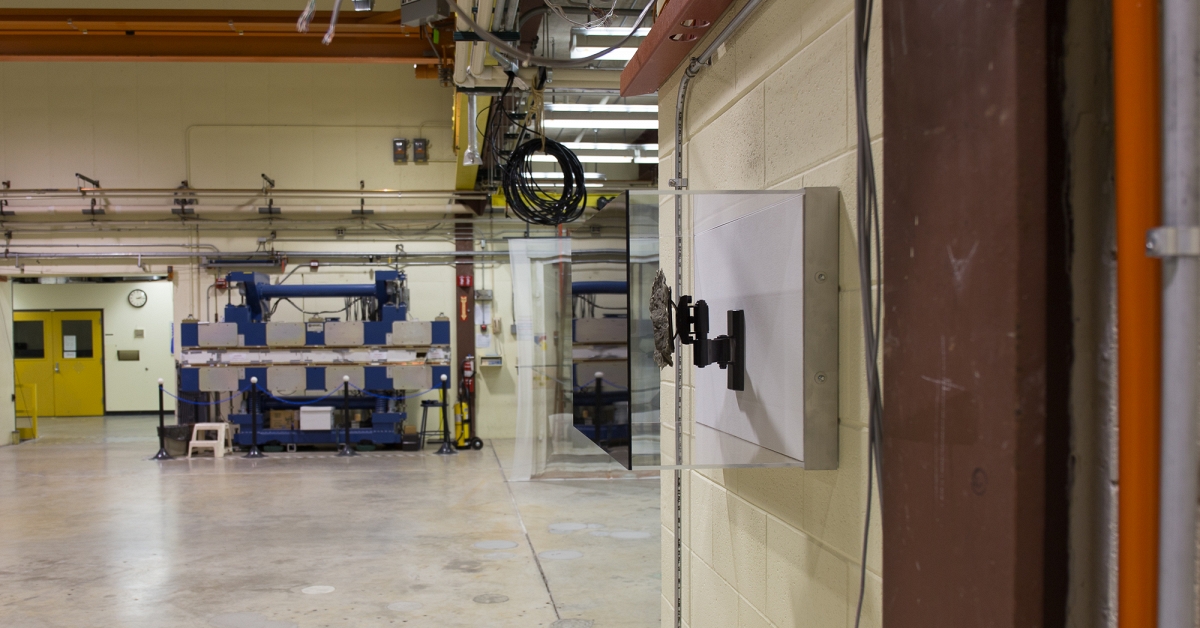 Condensed Matter Community is a site-specific curatorial project designed to generate a dialogue about science, aesthetics, progress and entropy. The project will use the Synchrotron Radiation Center’s (SRC) “vault” as an exhibition space to frame a selection of artworks during a transitional period, prior to forthcoming experiments.

Prompted by this transformation, Condensed Matter Community will focus its narrative around the evidence of past experiments and the on-site fabrication of new instruments for future investigations. The SRC’s visually-dense, research-oriented venue offers a context rich in complexity. It is embedded with layers of meaning and human traceability, in contrast to the typical commercial contemporary art environment. The liminal space of the laboratory is a setting outside of the art world proper, simultaneously mythic and real. The windowless vault of the SRC, which ran in three shifts 24 hours per day, denotes both a suspension and accumulation of time.

The artists involved represent a spectrum of contemporary practices that range from abstract painting to conceptual photography and new media. Through varied curatorial strategies, a curious slippage between art objects, scientific tools, and personal effects will occur. In this way, the artworks’ relationship to technological processes come to the fore and alternative readings emerge. The conceptual exchange between the history of the facility, the subjective content of objects viewed in-situ, and the ephemera of future experiments will hopefully uncover new areas of discourse.

Works will include a 3-D printed prototype-sculpture by Tauba Auerbach that is based on the Greek key, or “meander fret” design. With this piece, technology, design and history are brought into concert with one another. Tony Matelli’s Hand 2 (2014) appears to be fingerstreaked dusty mirror, but is in fact a permanently fixed composition that engages reflection, entropy, and gesture. David Robbins will appropriate fiction novels into the space, an extension of the work Endworld (Books By Another David Robbins). Playing with authorship, the books become humorous forensics that blur the line between art-objects and casual left-behind belongings. These are just few examples of the strategies that will be alongside the technology at the SRC, which in turn will be reframed by the artwork. The DUNE project’s monolithic ice drills take on a sculptural presence next to it’s neutrino sensor, whose composition of woven copper filaments over a massive steel frame is akin to some form of abstract hyper-painting. Tauba Auerbach, Meander Helix (Ribbon) 2015, 1.625 x 1.625 x 25 inches. 3-D printed resin, paint The SRC vault (read: magic cave) backgrounds all of this with traces of Aladdin’s “lamp”, from the Venn diagram and coffin-shaped cement “footprints” of is experiments in the floor of the facility, to it’s deconstructed institutional bookshelves, cabinets and “clean rooms.”

Condensed Matter Community will hold an opening event and be available by appointment for a limited period thereafter. However, the project will be documented and continue as a digital platform at www.condensedmattercommunity.org. Here, historical information from the University of Wisconsin-Madison Archives will be uploaded to allow for an emergent legacy of the space and the project. www.condensedmattercommunity.org