Belief in a Disenchanted World 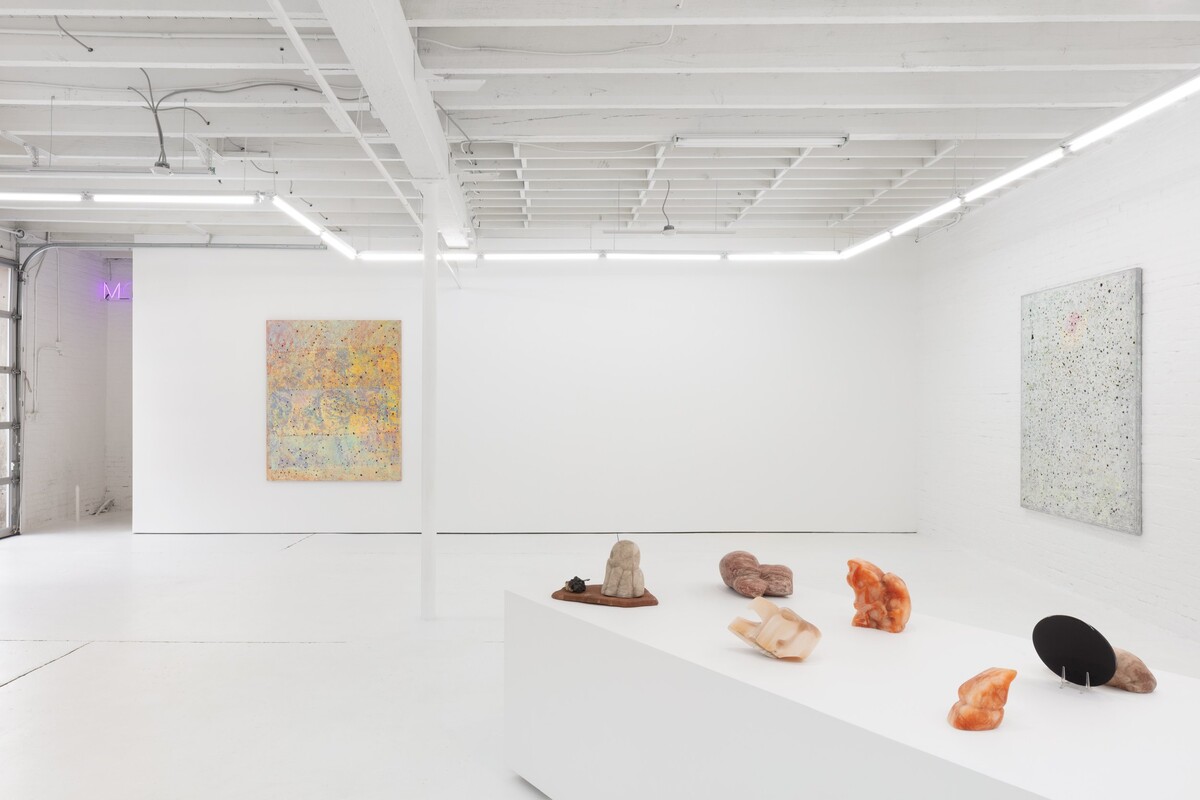 Installation view of “Belief in a Disenchanted World”, courtesy of Mother Gallery

The exhibition’s title refers to Dutch philosophy professor Wouter Hanegraaff’s essay “How Magic Survived the Disenchantment of the World.” Hanegraaff describes the tension between a participatory or magical worldview and a secularly rational, disenchanted worldview, and how the latter denies the innate human need for the former. He writes: “…not only does the feeling of participation explain the continuous attraction of magic in a disenchanted world—the experience of disenchantment actually causes an emotional need to reaffirm participation.” The works of Brock and 1 Hunter, while products of this disenchanted world, remain hopeful—they find magic within art-making.

Within his art practice, Kadar Brock creates contemplative spaces, finding spiritual purpose within a secular, mundane existence. Brock’s process is lengthy, delicate, and tedious: he mines ephemera found while researching the New Age cult that informed his earliest beliefs—The Movement of Spiritual Inner Awareness—for images to process, then performs rituals of projection and release in the studio. He un-stretches and scrapes down his representational paintings of said images, coats the ground in primer-sealer, then sands the surface down to create textural, chalky tangibility. 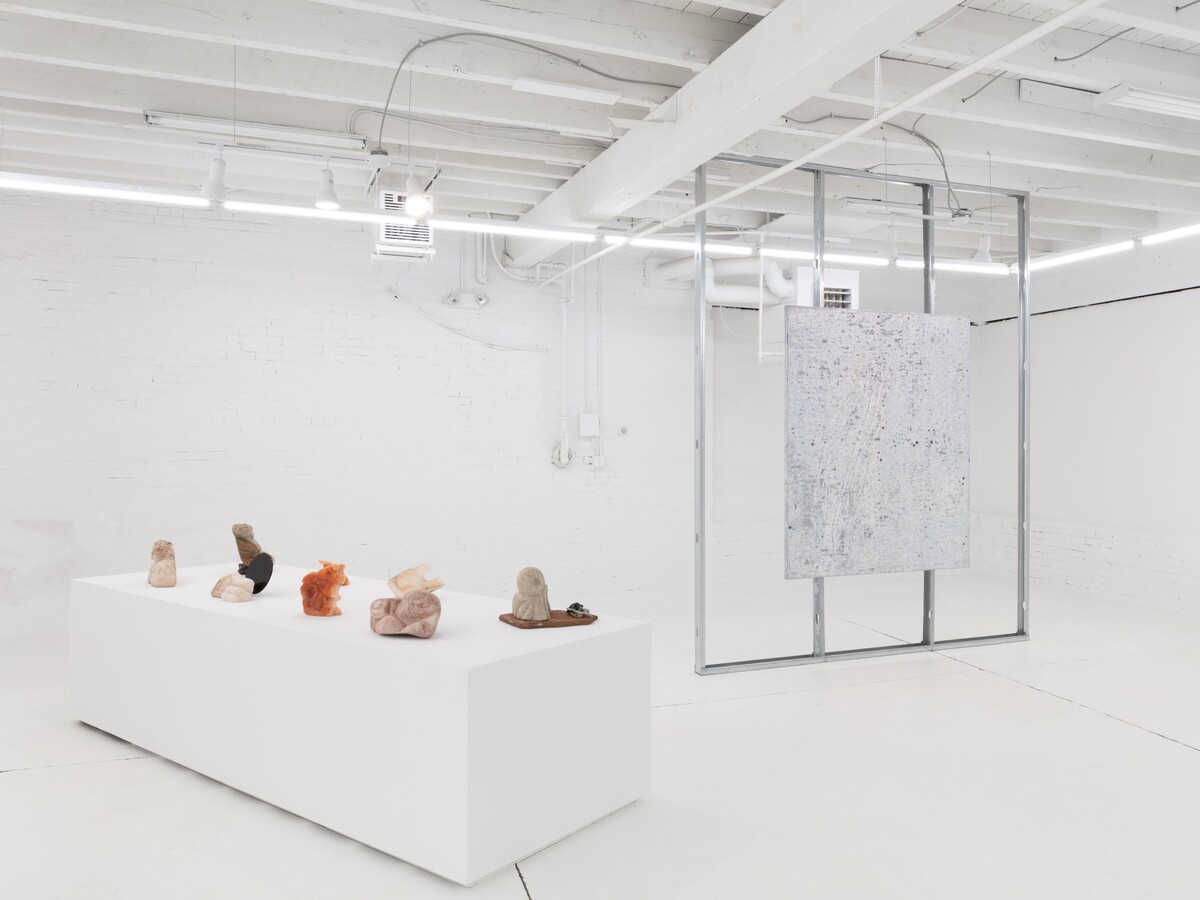 Installation view of “Belief in a Disenchanted World", courtesy of Mother Gallery

Brock then engulfs the broken new ground with another image in oil paint. He repeats this cycle until the many layers of painting and erasure grow unified—balancing cracks and chaotic holes that accentuate process. In soul flight, can make you feel good, and that’s always right, with the flick of a switch, comes from high (2022), the work at once evokes a wintery scene, a well-worn rag, and a palpable expanse of both color and the lack thereof. Continually tearing down what has been built, Brock’s paintings cannot be created without loss, and that loss—or release—prompts transformation.

For Belief in a Disenchanted World, Lee Hunter presents a selection of alabaster sculptures from their ongoing project, “Cosmogenesis”—a multimedia worlding project that takes the form of an archive. The project is told from the perspective of an archivist from the 2100s who is cataloging and interpreting artifacts. These sculptures come from the Temple of Light, a transdimensional travel cult that uses esoteric methods to travel the quantum field searching for portals to access parallel dimensions. The sculptures are ritual objects that were kept in a sacred collection at the Temple. Dragon Key; Thought to Open Portal Near Santa Fe; Found in Cas O’Brien’s personal items; E00032, is a small, milky-orange sculpture. At first glance the sculpture looks familiar to the 21st-century human eye, but slowly grows indistinct the longer one attempts to place it. The work’s title and background information accentuate this spiral of uncertainty, creating tangible, new pieces from a pre existing reality. 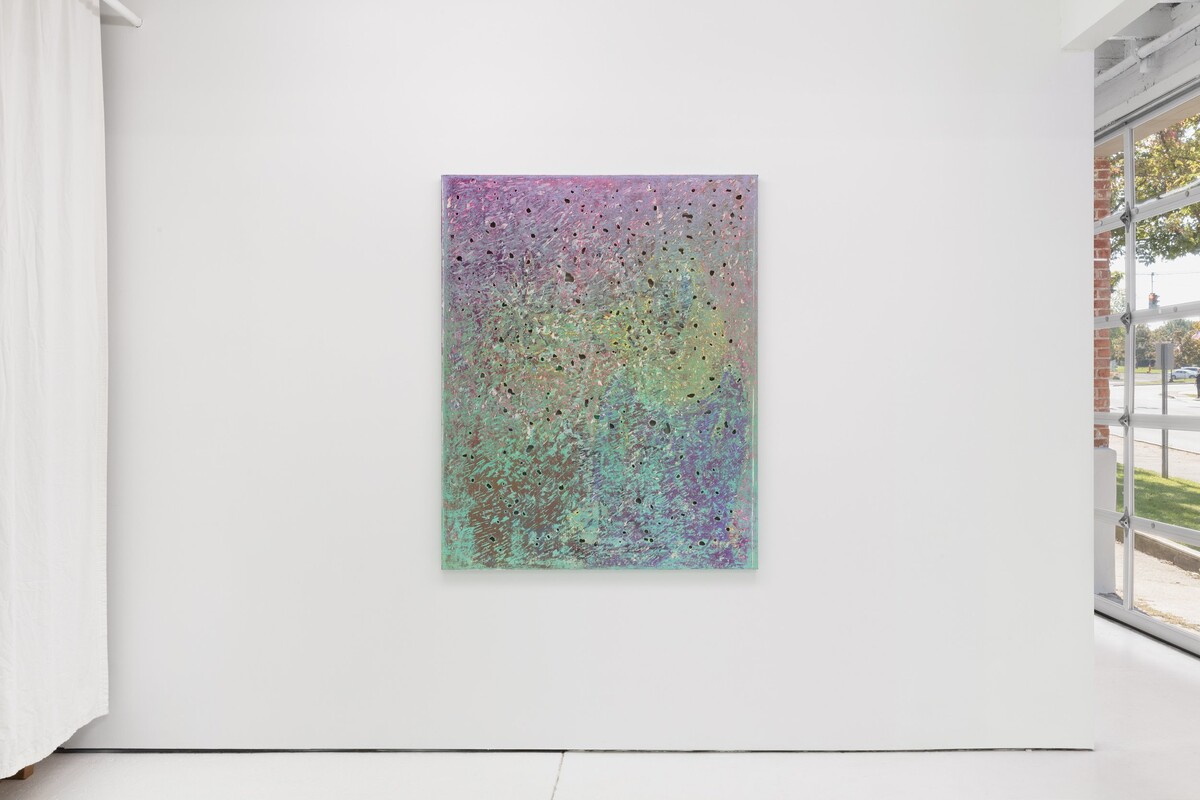 Installation view of “Belief in a Disenchanted World”, courtesy of Mother Gallery

A vehement dissent from and reclaiming of Max Weber’s 19th-century assertion that the world has grown disenchanted. The works of both Brock and Hunter, while philosophical and obscure, retain the accessible, purely human need for belief, magic, and participation. Together, Brock’s spiritual, anti-religious paintings and Hunter’s future-historied religio-objects build a ladder both horizontal and vertical—linking our earthly realm to the magical—however one may choose to define it.