Even a Cat Can Look at the Queen 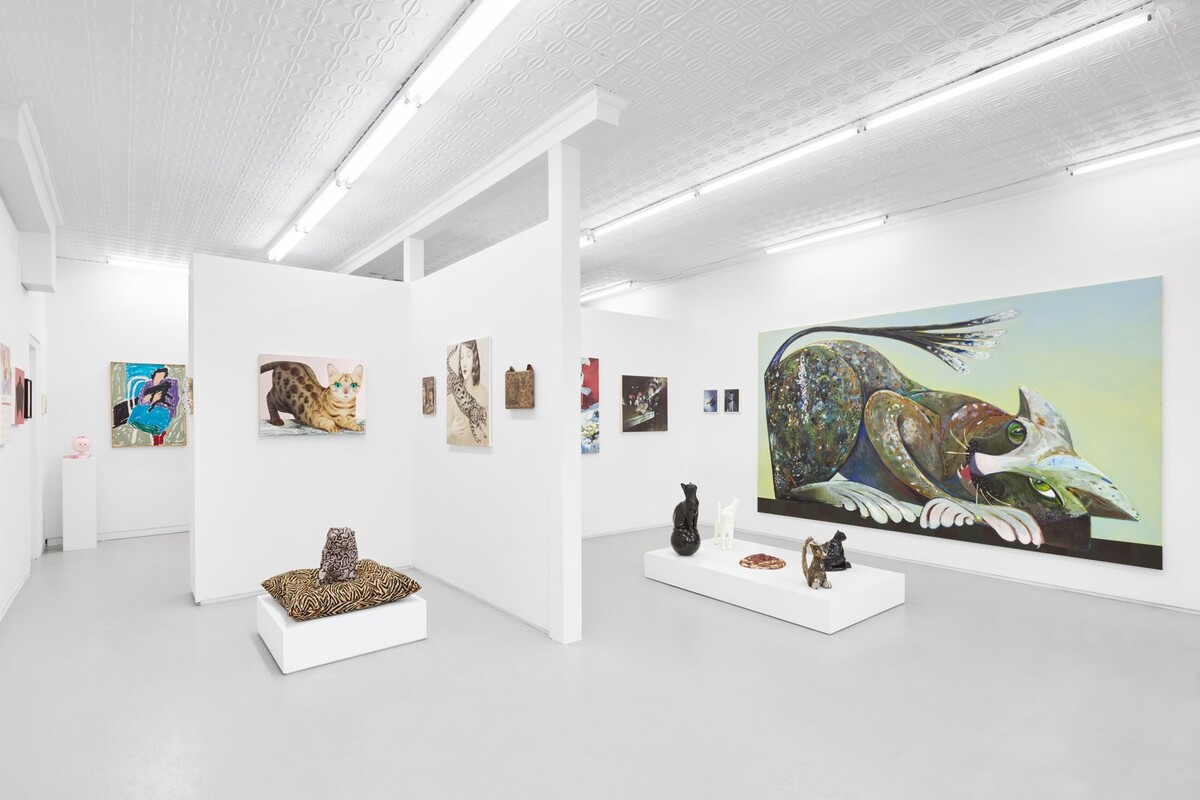 Installation view of “Even a Cat Can Look at the Queen”; Courtesy of Mrs. Gallery 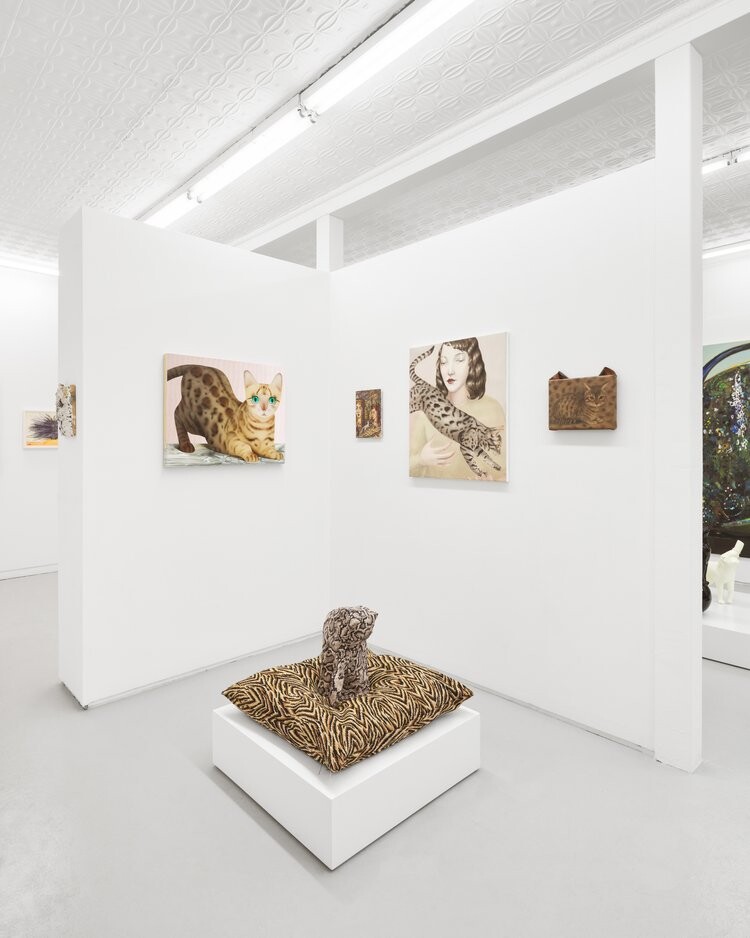 Installation view of “Even a Cat Can Look at the Queen”; Courtesy of Mrs. Gallery

A cat knows what anarchy is. Ask a cat. A cat understands. They’re against discipline and authority. A dog is trained to obey. A cat can’t be. Cats bring on chaos.
- Henri Cartier-Bresson 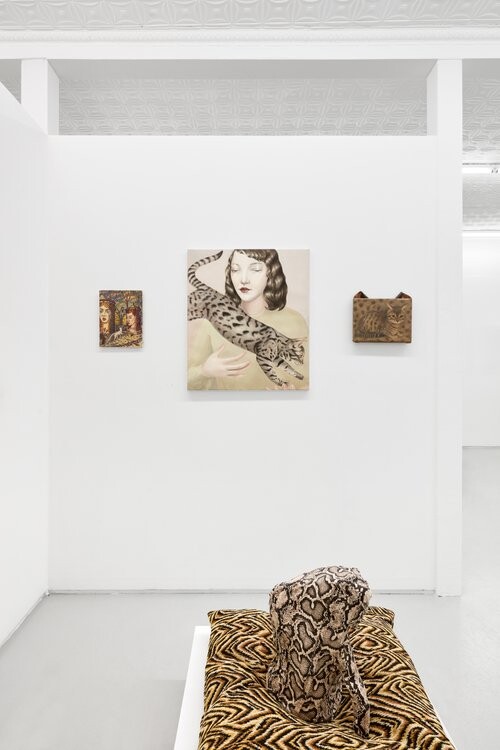 Installation view of “Even a Cat Can Look at the Queen”Courtesy of Mrs. Gallery

Mrs. is pleased to present Even a Cat Can Look at the Queen, a group exhibition that examines the numerous ways artists today are inspired by our often insolent companions…cats. Featuring paintings, sculptures, and drawings by 39 artists, this exhibition includes representations of felines that range from humorous to ominous, sweet to obscene, and conceptual to naturalistic. Since ancient Egypt, cats have maintained a ubiquitous presence in art. Originally symbolic of an Egyptian idol and guide in the afterlife, during the Middle Ages cats became synonymous with superstition, witchcraft, and paganism—associations that linger to this day. It wasn’t until the 1600s that they became the domestic companions they are known as today. Featuring artists from multiple generations, this exhibition depicts cats in all of their glory, as loving companions, fierce protectors, stubborn rebels, shadows in the dark, mythical shapeshifters, and as vehicles of unabashed comic relief.

Our beloved furry companions are often described as graceful, gentle, the embodiment of comfort, but also have been considered the epitomization of our vices–lustful, lazy, indolent, aloof, and stubborn. The artists in Even a Cat Can Look at the Queen articulate these inherent contradictions. While artists such as Kathe Burkhart, Kate Finneran, Stephen Pace, and Yves Scherer represent the sweet, docile, and loving nature of cats, others such as Abby Lloyd, Philip Hinge, Steve Keister, and Elbert Perez allude to their more menacing attributes. Cait Porter, Katharine Kuharic, Ali Liebegott and Sam Cockrell depict cats’ more contemplative moments. In ‘Liz with Cat,’ 2022, Burkhart portrays her familiar subject, Liz Taylor, sitting in a garden and holding a small black cat to her face, sharing an adoring and loving gaze. Caught in a moment of pure tenderness, the softer side of the post-feminist icon and the artist’s alter ego comes through. In Alexandra Rubinstein’s Space Pussy, we are confronted by the faint outline of a cat whose green eyes glow. While it is commonly known that cat eyes reflect light in the dark, by exaggerating/accentuating this trait, Rubinstein creates an otherworldly depiction that is haunting.

One of the most commonly-shared traits among cats is their curious, playful, and humorous…well actually hilarious…nature. Today cats are the viral subject of pictures, memes, videos, gifs, and reels that have overrun social media in the best way possible. Robin F. Williams, Anton Könst, Stephen Potlatch, and Lydia Blakely emphasize the mischievous nature of cats. In the monumental ‘Qing Cat,’ 2022, Könst depicts a cat crouched, eyes alert, mouth open, butt raised in the air, ready to pounce at whatever has drawn its attention. Other artists like Sophie Vallance Cantor, Alice Tippit, Grace Stott, Renate Druks, and Roger White use humor and irony in their feline representations. In ‘Kitty Infinity,’ 2022, Stott creates a sculptural wall relief of three cats intertwined in an endless circle of cleaning each other’s bums. This explicit depiction memorializes the flagrant disregard cats have for any potential onlookers while humorously nodding to the historical representations of cats that would have appeared on the walls of temples and within tombs. 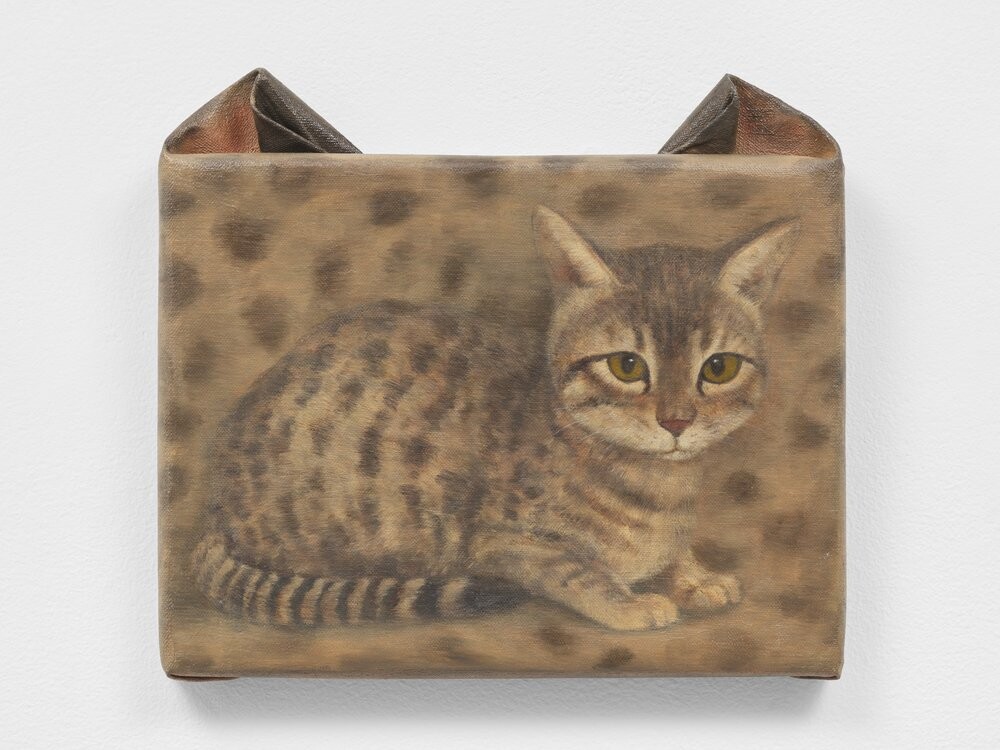 The title of the exhibition, Even a Cat Can Look at the Queen, is an old English proverb that served as a reminder that all people should be treated equally regardless of social status, education, age, gender, religion, or ethnicity. However, it has also been interpreted as emblematic of the rebellious and disobedient tendencies of cats. The works featured in this exhibition embody the true love, joy, torment, and defiance these furry creatures bring to our lives. While they are referred to as our domesticated pets, perhaps the ancient Egyptians had it right and that they are idols; we, humans, are merely here to serve at their behest.