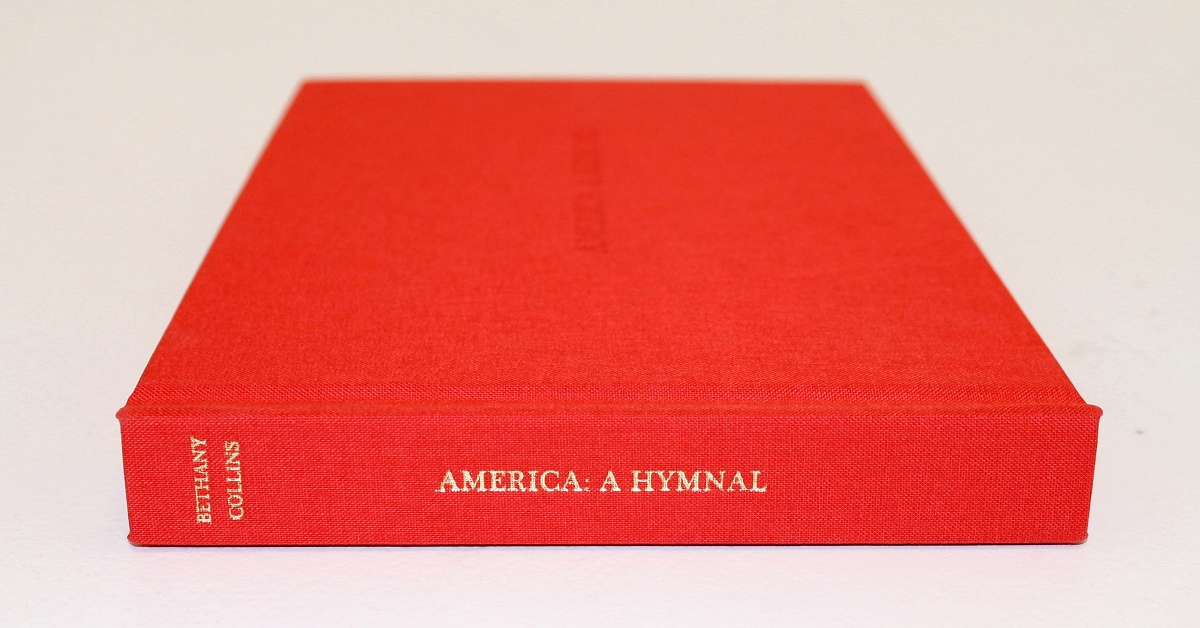 Chronopolitics curated by Florence Derieux, the 2017 IN/SITU program explores the idea of time in various ways. Evoking terms such as immediacy, instantaneity, simultaneity, ubiquity, imminence, permanence, impermanence, chance, probability, memory, remembrance, these artists’ works question the temporal conditions, or episodes, that disturb our traditionally linear understanding of time and progress. In doing so, they allow us to experiment, evaluate, imagine, and reimagine our own relation to the real.

This presentation by Bethany Collins consists of two separate works presented in dialogue, America: A Hymnal, 2017 and The Birmingham News, 1963, 2017. The title piece America: A Hymnal is made up of 100 versions of My Country ‘Tis of Thee from the 18th-20th c. While the differing lyrics remain legible, the hymnal’s unifying tune has been burned and etched away. Bound and executed in the likeness of a shape note hymnal, in its many lyrical variations, America: A Hymnal is a chronological retelling of American history, politics and culture through one song.

Written by the Rev. Samuel F. Smith in 1831, My Country ’Tis of Thee (also known as America) debuted on July 4, 1831 by a children’s choir at the Park Street Church in Boston, Massachusetts. Long before Smith’s lyrics were sung aloud, the tune for America served as the national anthem for at least six other countries, including the United Kingdom’s God Save the Queen. And since Smith’s writing, the lyrics of My Country ’Tis of Thee have been re-titled and re-written at least one hundred hundred times.

Each re-writing was in support of a passionately held cause—from temperance and suffrage to abolition and even the Confederacy— articulates a version of what it means to be American. In 1839, the familiar lines of “My country ‘tis of thee / Sweet land of liberty,” morphed into the mournful verse:

My country! ’tis of thee,
Stronghold of Slavery,
Of thee I sing:
Land where my fathers died,
Where men man’s rights deride,
From every mountainside,
Thy deeds shall ring.

Collin’s The Birmingham News, 1963, 2017, is a grouping of blind-embossed prints on newsprint of select interior pages from The Birmingham News archives from the year of 1963. The prints have undergone a series of multiple pressings, resulting in their final incarnation, a state of deteriorated fragmentation. Selected pages mark key moments in the 1963 Birmingham Campaign, a series of organized actions aimed at dismantling segregationist policies in one of the most racially divided cities in the US. While widely publicized by news outlets nationwide, violence against those involved in the Civil Rights Movement went largely unreported by the local Birmingham News, a conscious decision by the paper’s editorial board, ironically made out of fear of inciting violence. Select front-pages in Collins’ series showcase the alternative news items chosen to representative of the days’ events, instead of each day’s protests, demonstrations and counteractions. This particular presentation focuses on the paper’s interior pages where the minimal coverage was buried. What is left in the archives is a blind eye towards the complete story of these days in history, a selective decision to focus on alternative events that leave the narrative incomplete.

America: A Hymnal is the first edition in a series of collaborations between PATRON and Candor Arts. This collaboration between PATRON artists and Candor Arts aims to create a series of art books that expand on the artists’ practices through an approachable and attainable art object. Through the intimate and powerful engagement of artist books each artist will create a unique and special limited edition.