Jul 17 – Aug 28, 2021
PATRON is proud to present, Value Studies, our second solo exhibition with New York-based artist Anna Plesset. The exhibition will open to the public on Saturday, July 17 and will continue through August 28, 2021.

“Representation of the world, like the world itself, is the work of men; they describe it from their own point of view, which they confuse with absolute truth.”
-Simone de Beauvoir, The Second Sex (1949)

Anna Plesset’s research-oriented practice—spanning painting, sculpture and drawing— is concerned with the cultural and psychological processes by which knowledge is erased, translated and retold. The medium of painting has been historically utilized to elevate the status of those who are in the position to author their own mythology. The male-dominated Hudson River School, a mid-19th century American art movement of landscape painters influenced by Romanticism, is no exception to this long history. Plesset’s current project Value Studies aims to reframe the iconic movement with references to the artistic contributions by lesser-known female figures. It is part of the artist’s larger on-going project American Paradise, borrowing its title from the Metropolitan Museum of Art’s 1987 exhibition catalog, which canonizes the mythology of the Hudson River School. 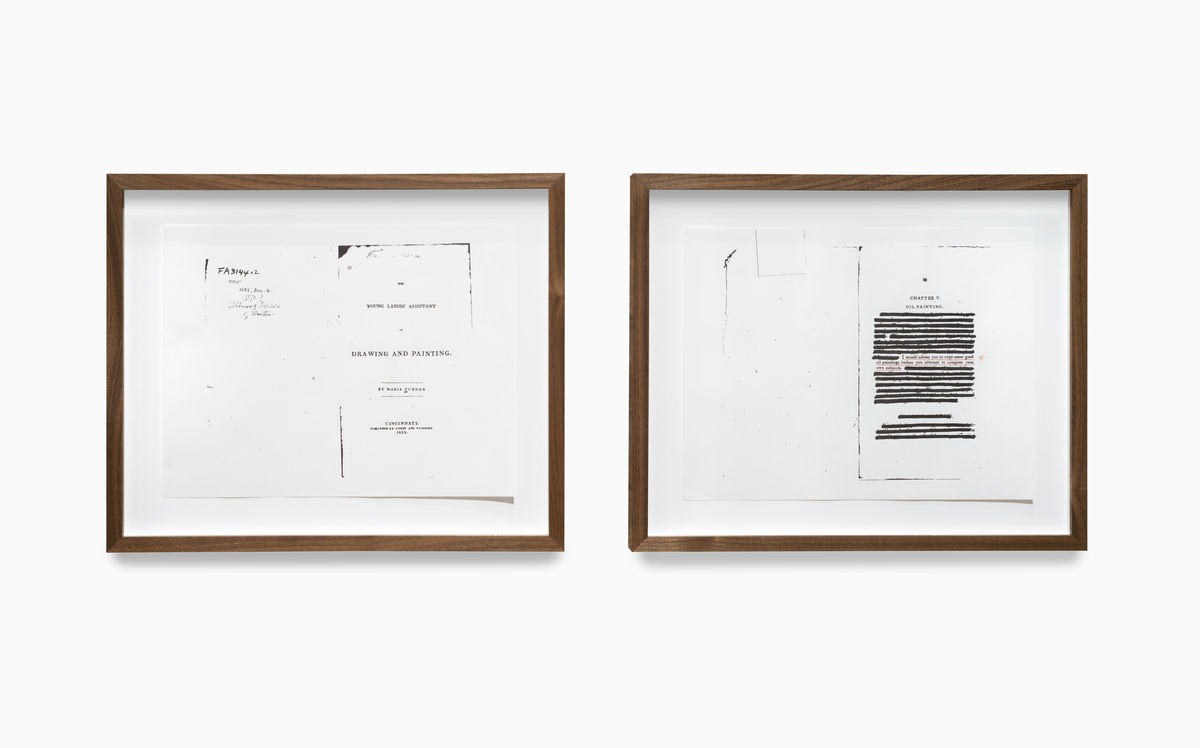 Value Studies, the artist’s second solo show at PATRON, comprises two trompe l’oeil paintings that highlight Sarah Cole and Louisa Davis Minot’s relationship to the Hudson River School. Also included in the exhibition is a diptych of facsimile carbon pencil drawings based on pages from Maria Turner’s 1833 instruction manual The Young Ladies’ Assistant in Painting and Drawing. The drawings, referencing the title page and chapter on oil painting, conceptually foreground the two “in-progress” paintings in the exhibition. Trompe l’oeil—French for “to deceive the eye”—is a device that Plesset often employs within her practice as a means of situating illusionism in the moment of historical recovery. Art historically this painting technique has been used to be subversive and/or insert oneself into a particular narrative. It’s the grand reveal that serves to draw our attention to the intentionality behind that which is visible and invisible, often pointing to specific power constructs. 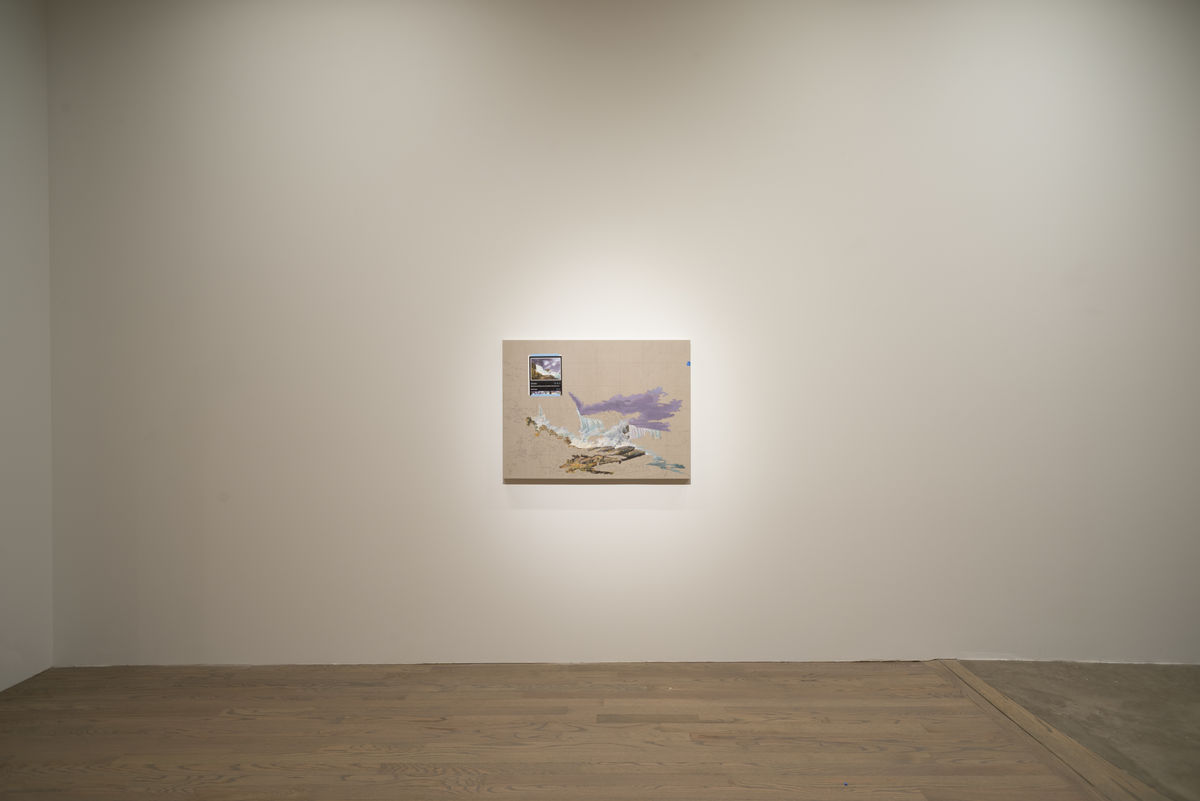 With adroit exactitude, Plesset’s Value Study 1: A View of the Catskill Mountain House / Copied from a picture by S. Cole copied from a picture by T. Cole / 1848 (2020), portrays and ostensibly reimagines the in-progress painting by Sarah Cole, the sister of Thomas Cole who founded the Hudson River School. Sarah Cole’s noted artistic output consists today of only a handful of paintings, some of which are copies of her brother’s paintings. According to Plesset’s research, the women artists involved with the movement were pushed to the periphery. The artist’s approach to recuperating this lost narrative is to paint the act of copying a painting, which serves to pay homage to the exercises’ role within art history and honor the women omitted from the canon. Plesset purposefully paints a work that appears to be unfinished, replete with the underdrawing of S. Cole’s original 1848 painting alongside of what appears to be a printed cut-out of a Google Image Search of it taped to the raw canvas for reference. Her use of trompe l’oeil in this case becomes a tool of “redating” the painting. This method of referencing various source materials makes visible the translation of histories over time across different media, while encouraging the viewer to question what has been omitted. 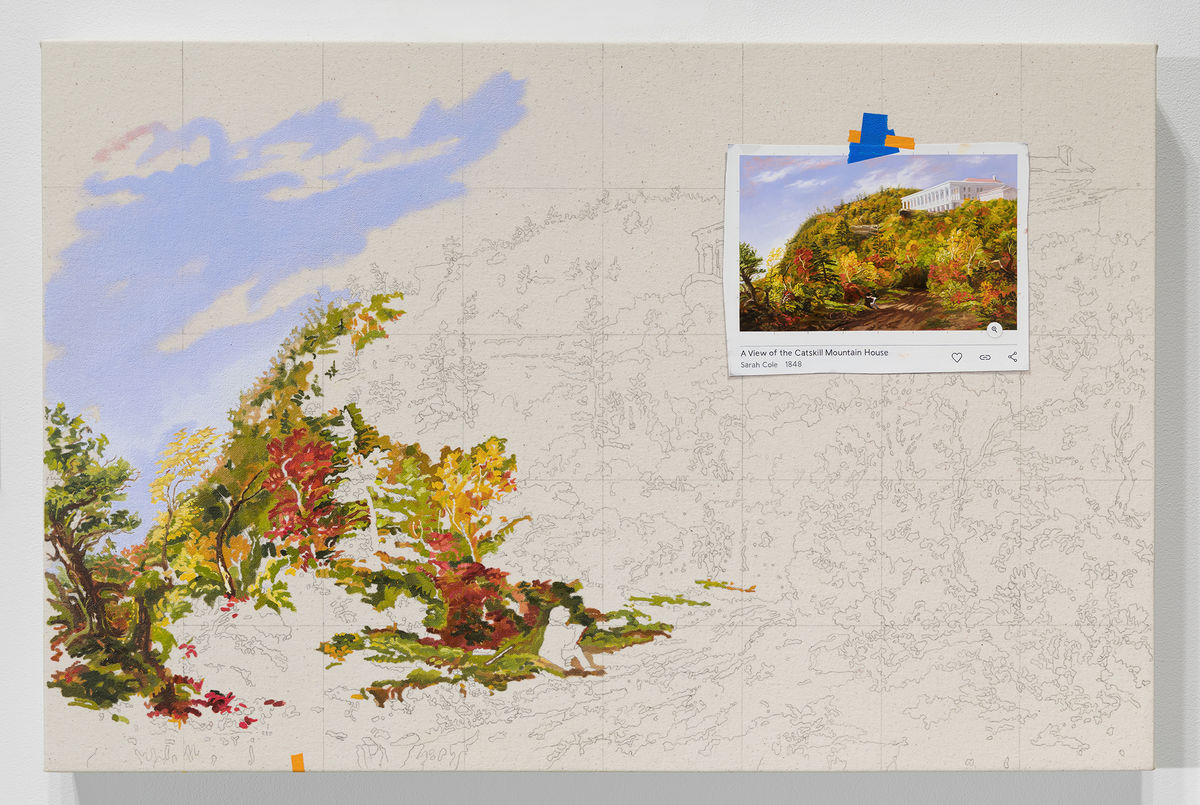 The sister trompe l’oeil painting in the exhibition Value Study 2: Niagara Falls / Copied from a picture by Minot / 1818, (2021) accounts for Louisa Davis Minot’s work from 1818 that displays a color palette, style and heroic composition on par with the celebrated attributes of the Hudson River School. Within the picture plane of the work, Plesset depicts a partially finished version of Minot’s Niagara Falls alongside of a Google Image Search print-out of the work for reference. In this case, the viewer can see in the row of thumbnails next to the photorealistic depiction of blue tape a partially obscured image of Frederic Edwin Church’s canonical 1857 painting of Niagara Falls (painted nearly forty years later). Painted alongside depictions of Minot’s two 1818 paintings, it visually functions to insert Minot into the history. Value Studies slows down, complicates and makes visible the mechanisms of copying and revision in a way that points to the forever-unfinished act of historical recovery. 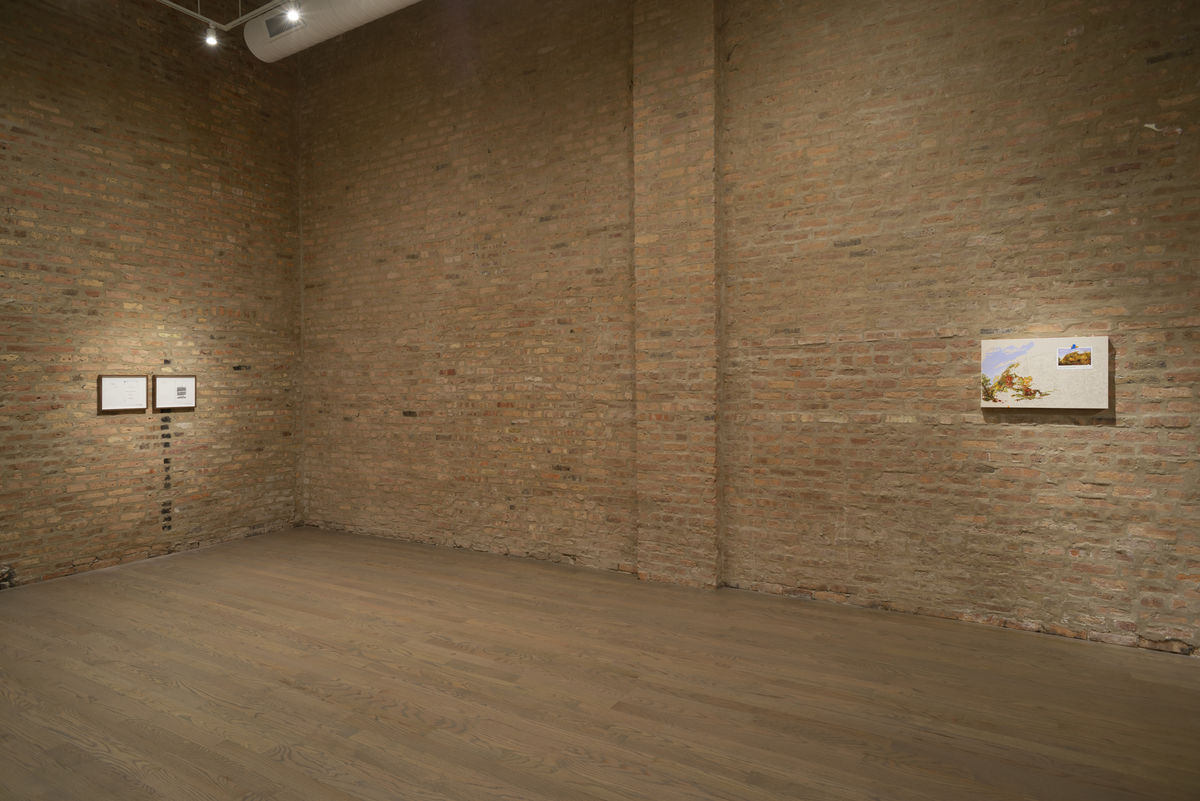 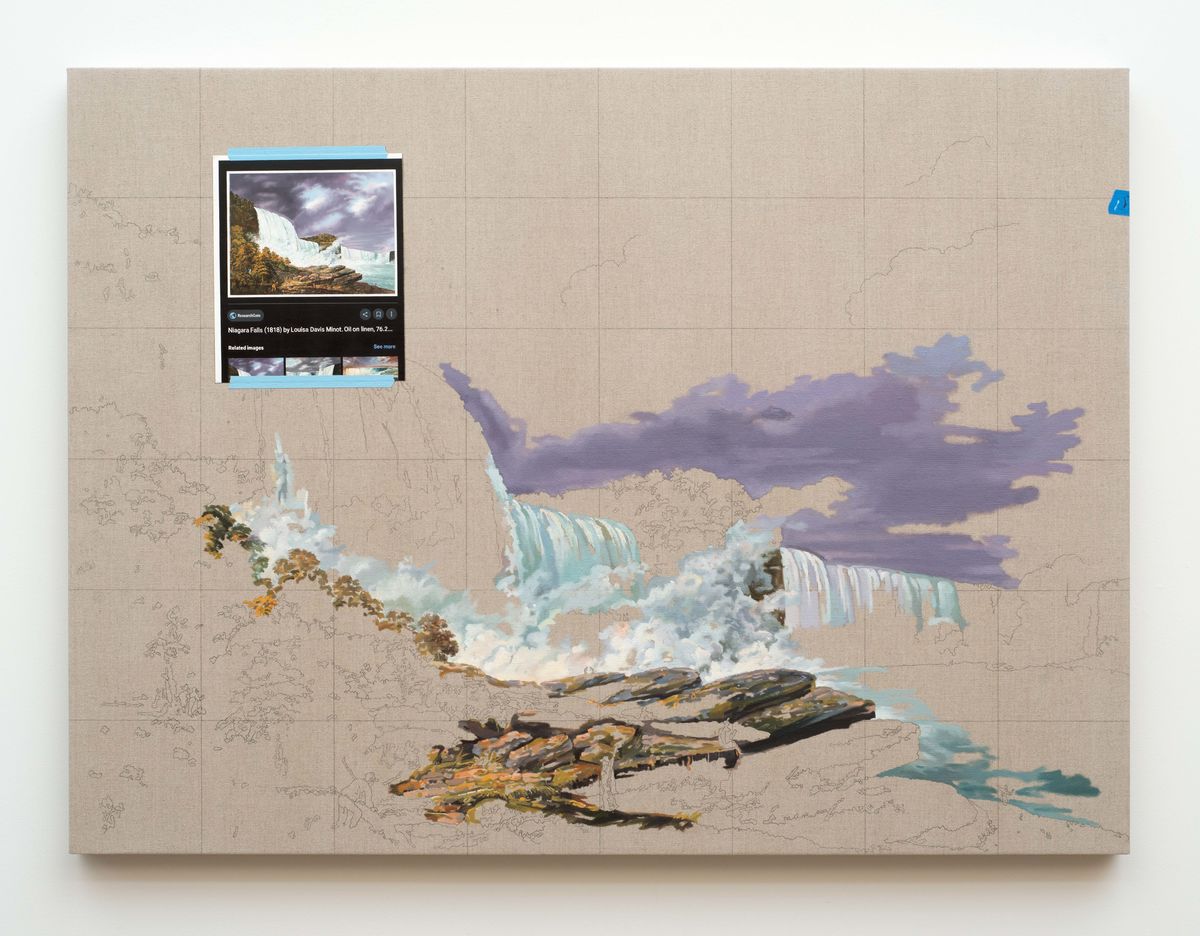 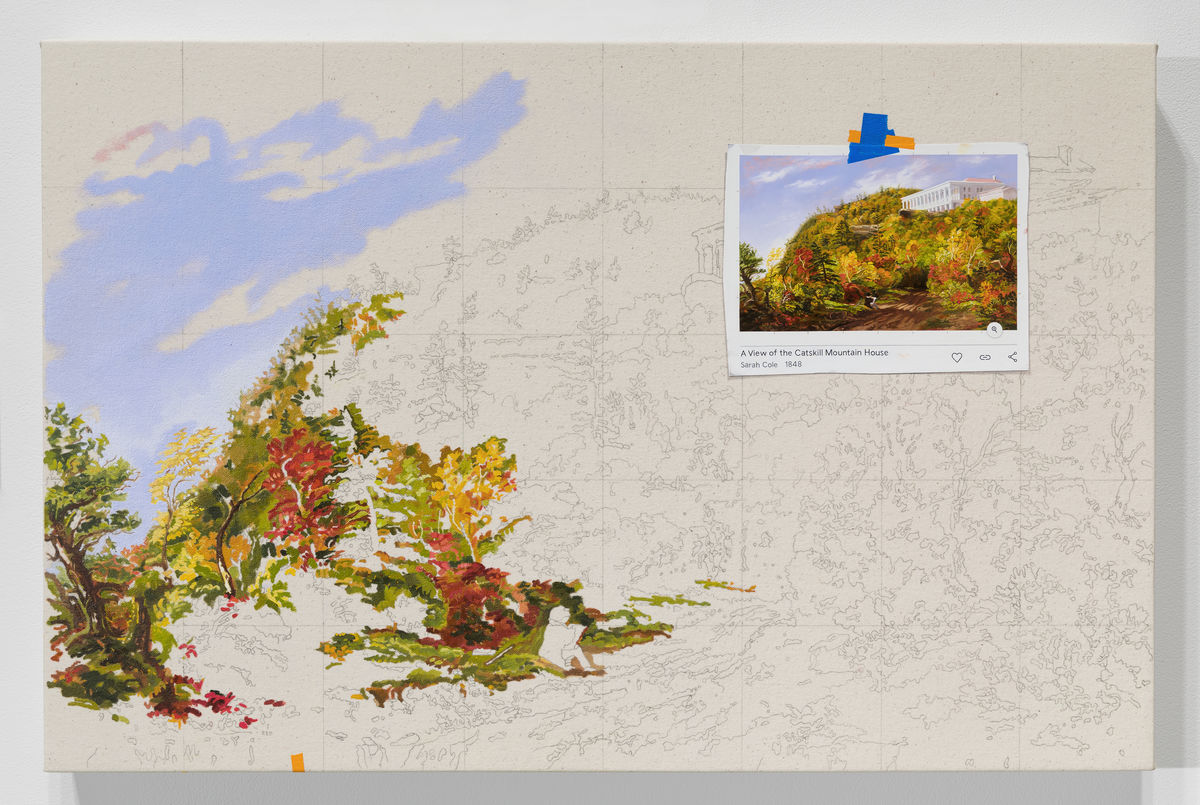