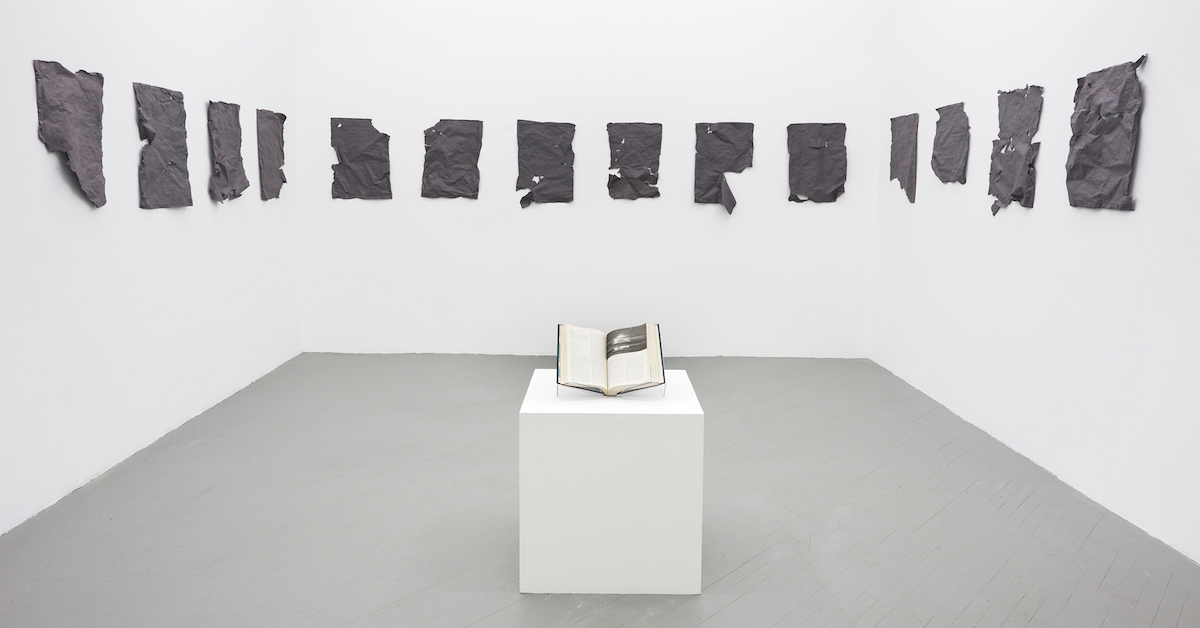 PATRON is proud to present a solo project by Chicago based artist Bethany Collins, titled Material Fact. The exhibition will be on view from January 28, 2017, through March 25, 2017, with an opening reception on Saturday, January 28th, from 1 to 4PM.

“…The deterioration marks the loss of a shared public reality, which is a state we’ve returned to…when we refuse to name a thing in one place, it morphs into another form in order to be recognized…the deliberate absence of coverage of violence against the civil rights movement appears as abrasions, tears, and removals…”

There is a ruminative consideration for time in Bethany Collins’ work. Unquestionably time is an inexplicable force that drives our engagement and perception of progress. Upon reflection however, it is important to note that though time may pass, nothing entirely goes away. Collins’ practice looks at archives, exploring the juncture between language and object as record of racial and political historic account. Material Fact takes its name from the term’s definition in the Black’s Law Dictionary, stating that a material fact is “crucial to the interpretation of a phenomenon or a subject matter, or to the determination of an issue at hand, this is a specific type of validated event, item of information, or state of affairs”. This presentation is a contemplative look into a time we thought we’d left in the past but find ourselves adjusting to presently as a possible daunting future. The echoes of lessons, learned from the triumphs and efforts of the Civil Rights Movement, feel as though they are lingering fainter and fainter in the collective memory of the present. 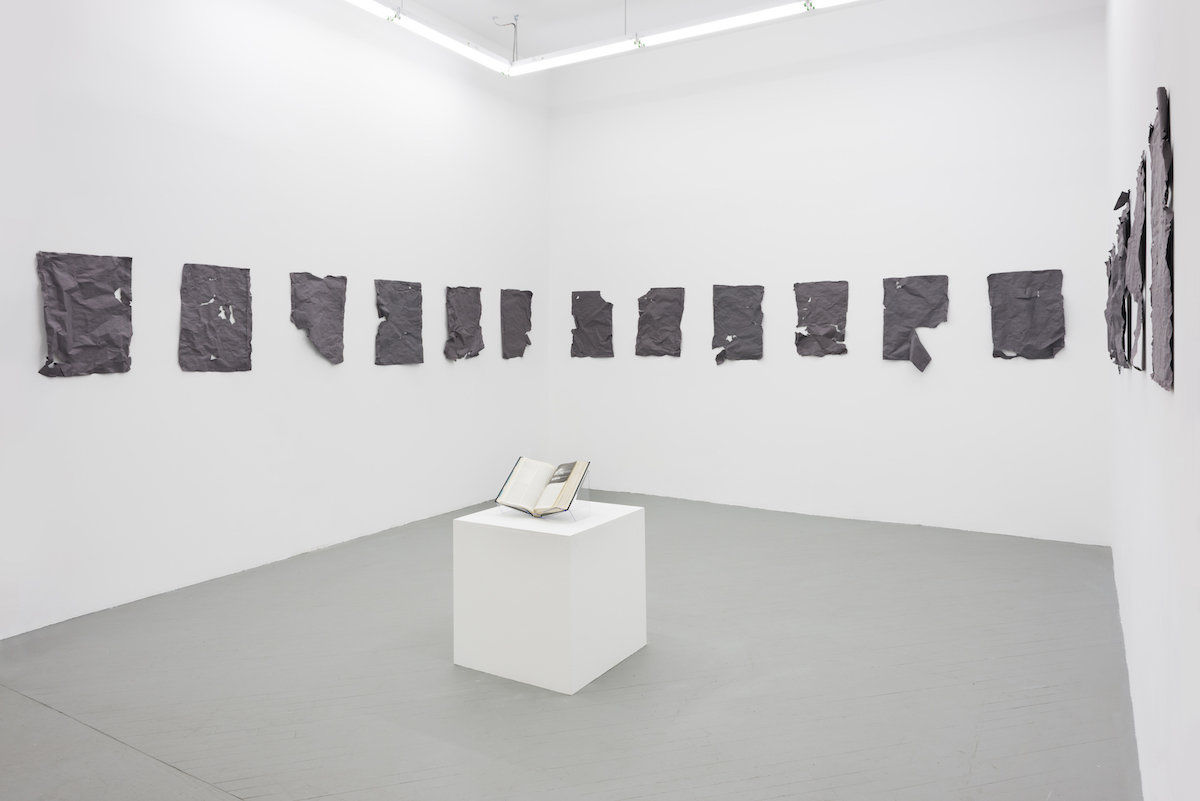 Material Fact brings together three new works. The Birmingham News, 1963, 2017, is a grouping of blind-embossed prints on newsprint of select front pages from The Birmingham News. The prints have undergone a series of multiple pressings, resulting in their final incarnation, a state of deteriorated fragmentation. Selected pages mark key moments in the 1963 Birmingham Campaign, a series of organized actions aimed at dismantling segregationist policies in one of the most racially divided cities in the US. While widely publicized by news outlets nationwide, violence against those involved in the Civil Rights Movement went largely unreported by the local Birmingham News, a conscious decision by the paper’s editorial board, ironically made out of fear of inciting violence. Select front-pages in Collins’ work showcase the alternative news items chosen as representative of the days’ events following several of the demonstrations. What is left in the archives is a blind eye towards the complete story of these days in history, a selective decision to focus on alternative events that leave the narrative incomplete. 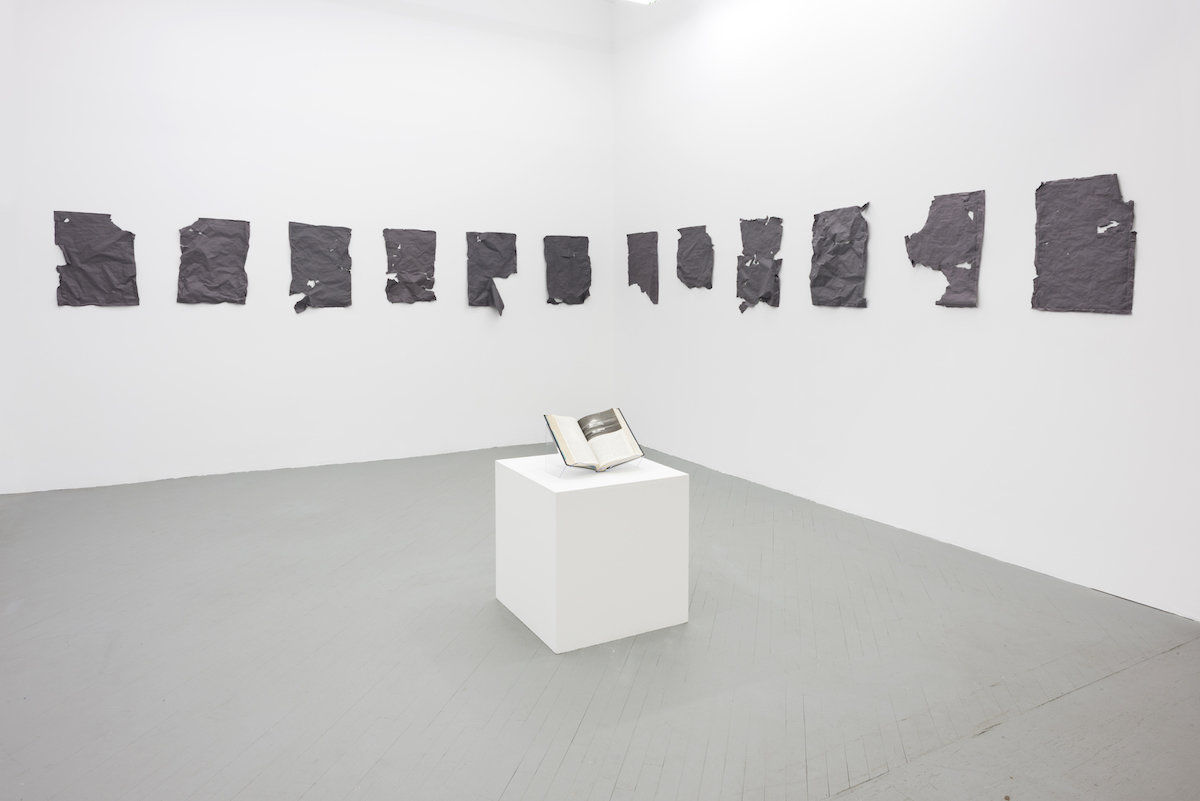 The Encyclopedia Americana (U), 2017, is an altered volume from the 1963 Encyclopedia Americana and is opened to a passage covering the Twentieth Century. An image of an atomic blast bears the phrase –“ I have always doubted the utility of these conferences on disarmament”– etched onto the surface and into the pages beneath. The phrase comes from a series of contextual exemplary sentences found throughout the 1982 volume of the American Heritage Dictionary. The 1982 release of the American Heritage Dictionary saw the addition of 10,000 new words, many reflective of the social and political change of the time, with inclusions such as “acid rain”, “nuke”, and “body count”. This violent theme is carried over to the illustrative sentences within definitions of the most mundane and common words, painting a portrait of a time preoccupied with questions of right and wrong. 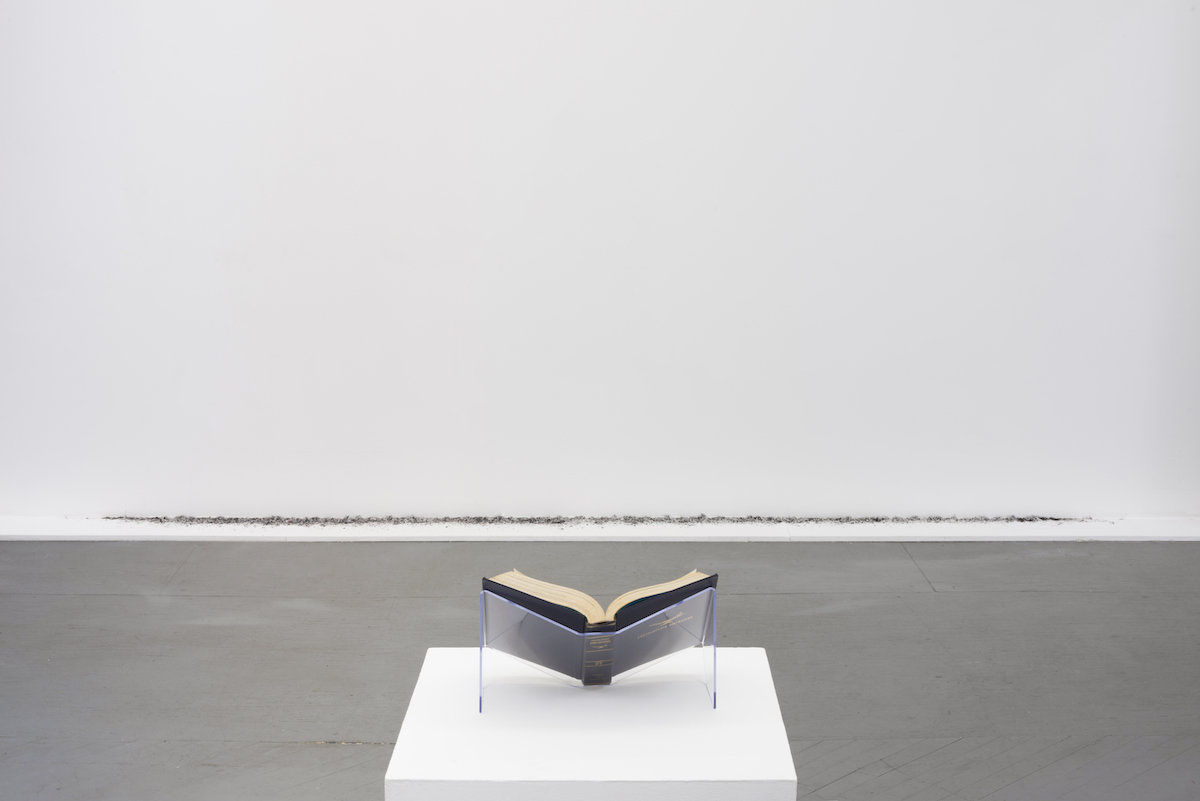 Find, 1982, 2017, continues the engagement with the phrases and text pulled from the 1982 American Heritage Dictionary, but is composed of the shavings and dust resulting from the text’s repeated erasure. In each of the works, violence is embedded within language itself precisely because it is embedded in our shared history. A history it seems we are bound to repeat even now.

BETHANY COLLINS (b. 1984 Montgomery, AL) lives and works in Chicago, IL. Collins received an MFA from Georgia State University in Atlanta Georgia, a BFA from the University of Alabama in Tuscaloosa, AL and attended the Glasgow School of Art, Capstone International in Glasgow, Scotland. Recent solo exhibitions include In Evidence, Van Every/ Smith Galleries, Davidson College, Davidson, North Carolina; The problem we all live with, Birmingham Museum of Art, Birmingham, AL; with the exception of the sky, Hudgens Center for the Arts, Duluth, Georgia, and Inquiry’s End, Richard Gray Gallery, Chicago, IL. Her work is included in the public collections of the Birmingham Museum of Art, Birmingham, AL; High Museum of Art, Atlanta , GA; Montgomery Museum of Arts, Montgomery, AL; The Studio Museum in Harlem, New York, NY; Zuckerman Museum of Art at the Kennesaw Stats University, Kennesaw, GA; Pennsylvania Academy of Fine Arts, Montgomery, AL; and the Agnes Scott College, Decatur, GA.