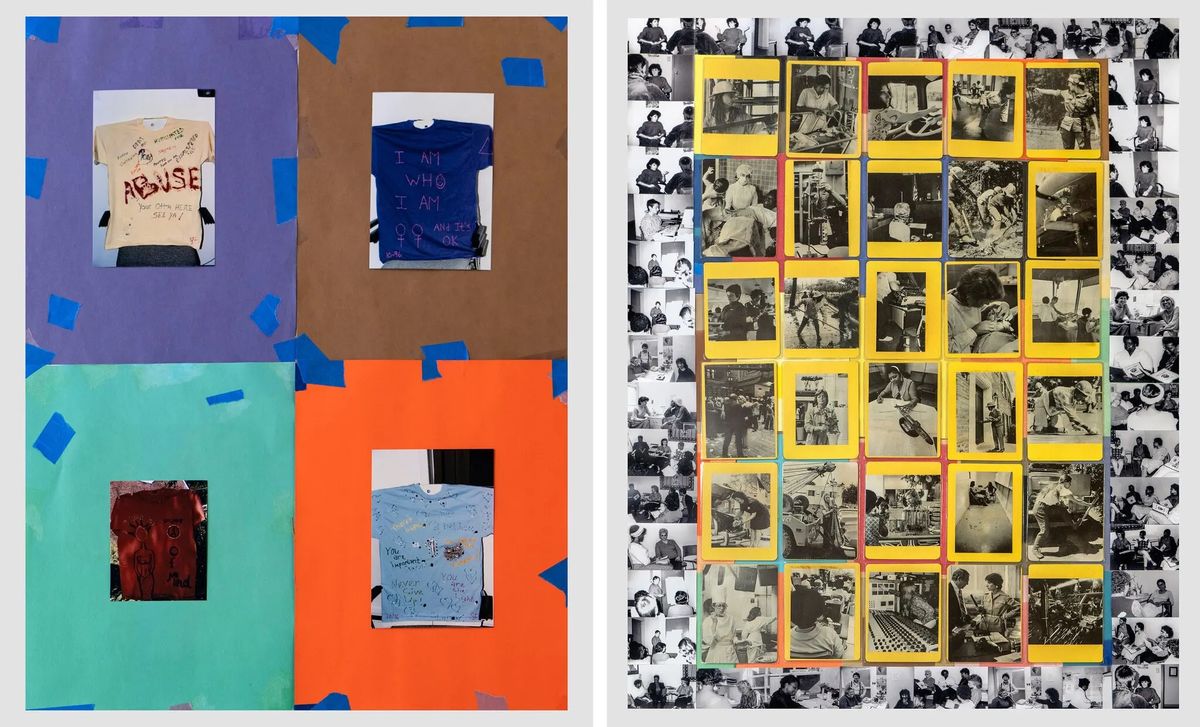 Left: Carmen Winant, “Violence is one of the ways that men have learned to cope with stress” (2022) | Right: Carmen Winant, “Women’s blueprint for survival (2)” (2022) (image courtesy the artist, commissioned by the Print Center)

Carmen Winant is a photographer who rarely takes photos. Instead, she pulls them from pamphlets and papers and installs her findings in ways that overwhelm — for “My Birth” (2018), she taped 2,000 images of childbirth to the walls of the Museum of Modern Art, demanding a reckoning of how the culture has framed and censored an experience that’s central to the lives of most women. For the solo show that opens this week in her native Philadelphia at the Print Center, the Columbus, Ohio-based artist delved into the archives of two organizations that support those impacted by domestic violence: the National Coalition Against Domestic Violence and Women in Transition. Winant braced herself for photographic evidence of violence; instead, she faced piles of materials designed to empower survivors. The resulting pieces include a photo grid of women immersed in work, which Winant found on cards passed out to those seeking to support themselves with a new career; copies of a “power-control” diagram given by social workers to help identify abuse; and imagery of T-shirts decorated by survivors, with puff-paint affirmations like, “I was in a box of pain!! But now I am free!!” “There’s agony in the exhibit, but there’s so much life-affirming material,” Winant says. “I wouldn’t have been able to carry on if that wasn’t a part of it.” “A Brand New End: Survival and Its Pictures” is on view April 15 through July 16 at the Print Center in Philadelphia, printcenter.org.
Carmen Winant A Brand New End: Survival and Its Pictures