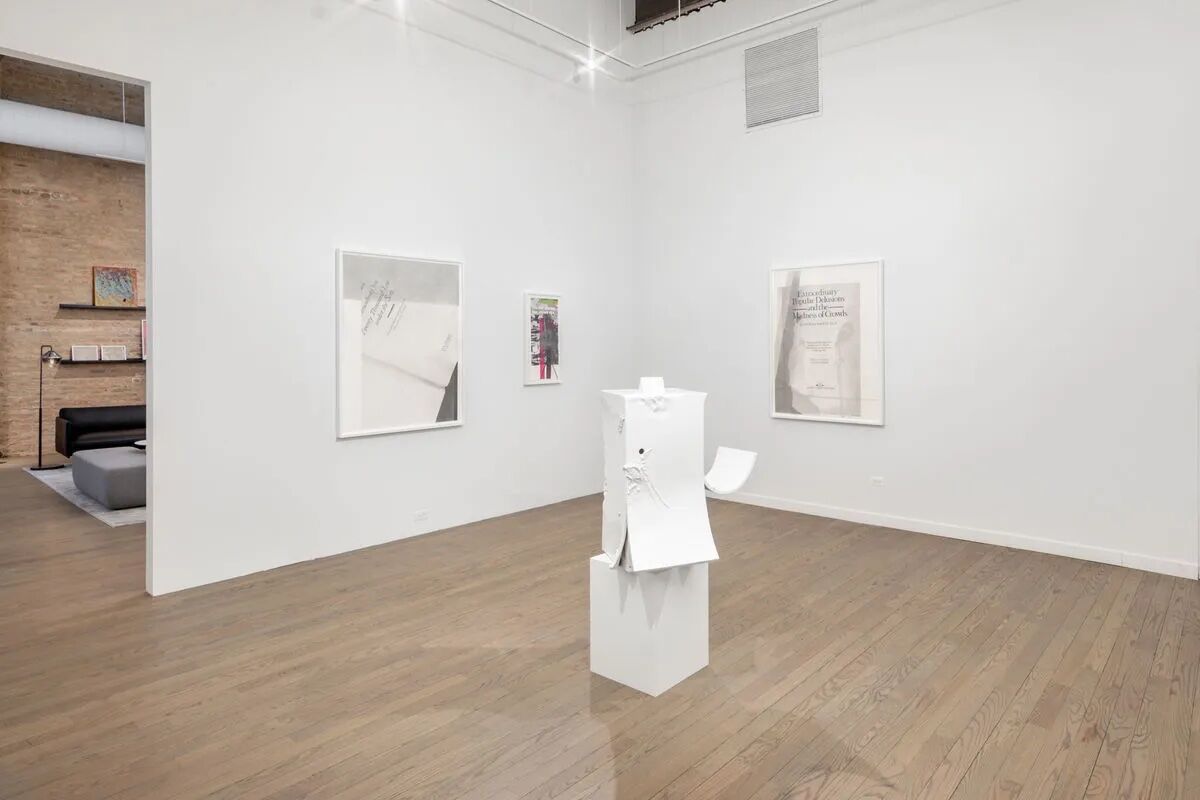 Barbarita Polster asks: If irony traditionally requires expressing one thing to mean its opposite, what happens when opposites become oppositional no longer?

Placed in careful conversation, the works in artist Nyeema Morgan’s recent exhibition, The Set-Up, at PATRON (Chicago) operate on different physical scales to build up toward a punchline frustratingly denied. Large-scale graphite drawings of photocopied title-pages, white pedestals added to and subtracted from, and silkscreens with black holes on the floor in front of them–seemingly placed by Wile E. Coyote himself–each begin to let the viewer in on the riddle while keeping resolution suspended. Punchlines hang silent and hovering, but withheld. Or at least I think so: I never could make it to see the show.

Allow me to explain why I find it important here to have broken both of my cardinal rules as a writer: 1) to never, ever write formally in the first person and 2) to refrain from writing about an exhibition without having seen it firsthand. Questions about humor have ballooned over my own work in recent years, particularly in light of past political events that prompted several prominent comedians to note the difficulty of contemporary sketch writing, now that “satire has become reality.” I’d wondered what became of comedy when a society underwent tenuous shifts in values: for example, if irony traditionally requires expressing one thing to mean its opposite, what happens when opposites become oppositional no longer? Having missed the exhibition probing similar themes at PATRON, I instead encountered the show through the generosity of gallery and artist: a later viewing in the gallery of several works pulled from storage, a visit to the artist’s studio, and PDFs of previews, catalogs, and recent interviews. In short, I experienced a set-up of The Set-Up. 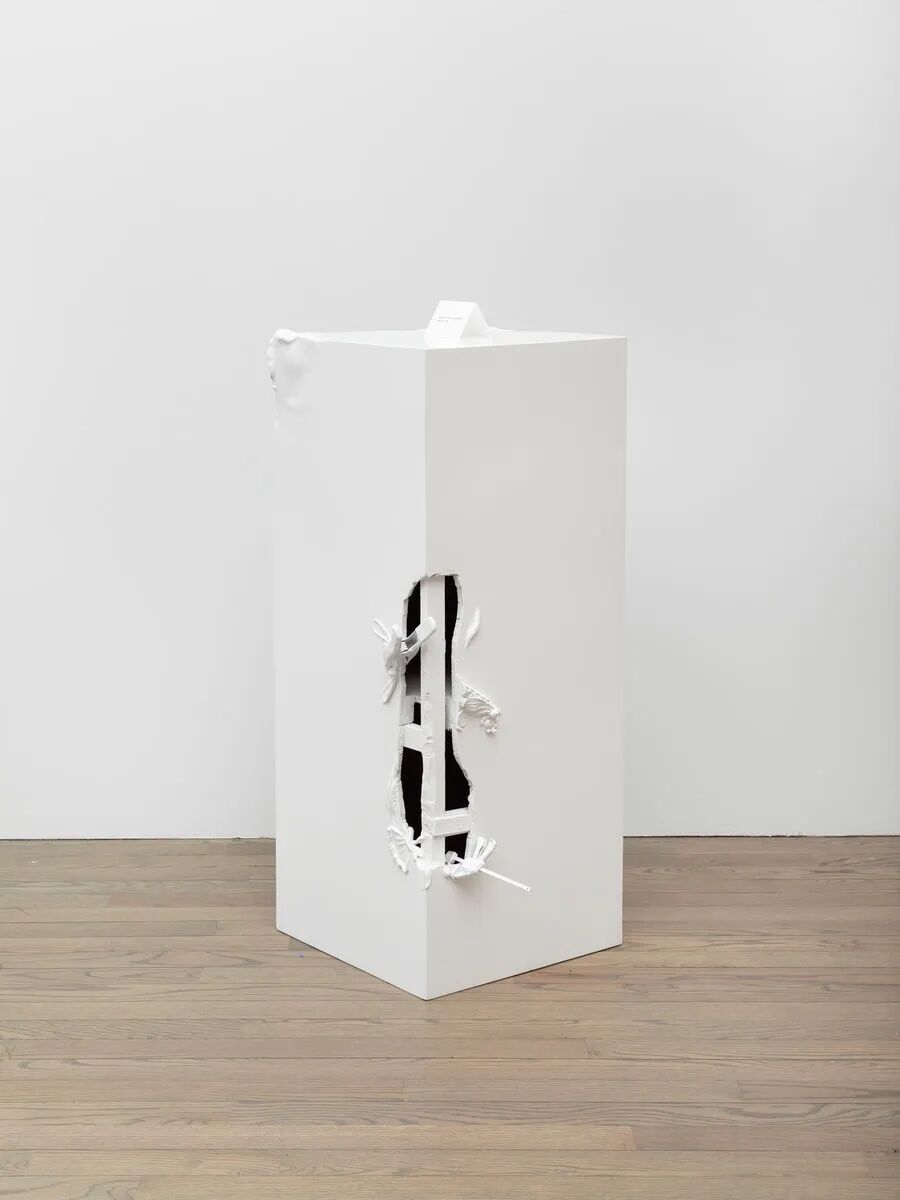 The “set-up” ultimately comes back to voice. Atop two altered, white pedestals – generally taken to be the support structure for an artwork, but here activated as the artwork itself – sit small folded cards. Each card bears a variation on the “_____ walks into a bar” convention, addressing the reader in the voice of the archetypal comedian. The rigidity, the mechanization of the form itself, allows for the familiarity of phrasing that conjures the trope of this voice in addition to (and sometimes overlapping with) that of the artist/author herself. The artist makes herself known here in other ways: encrusted in the otherwise smooth resin and lacquer of the pedestal are elements like woodworking clamps and fragmented ornamentation that recall classical gilded frames, moments that break the consistent voices of both comedic and institutional authority. Similarly, the text of the monoprinted horror horror series, “the one about the [three pigs]” and other variations, feature the voices of the archive (via difficultly poignant historical images of American lynch mobs), the artistic canon (original African works or Modernist sculptures? It remains ambiguous), and Saturday morning cartoons. Even the extra-ordinary language of the Like It Is series (nine large graphite drawings of photocopies of title pages belonging to books with the word “extraordinary” in the title) presumes the common existence of an ordinary at its foundation. 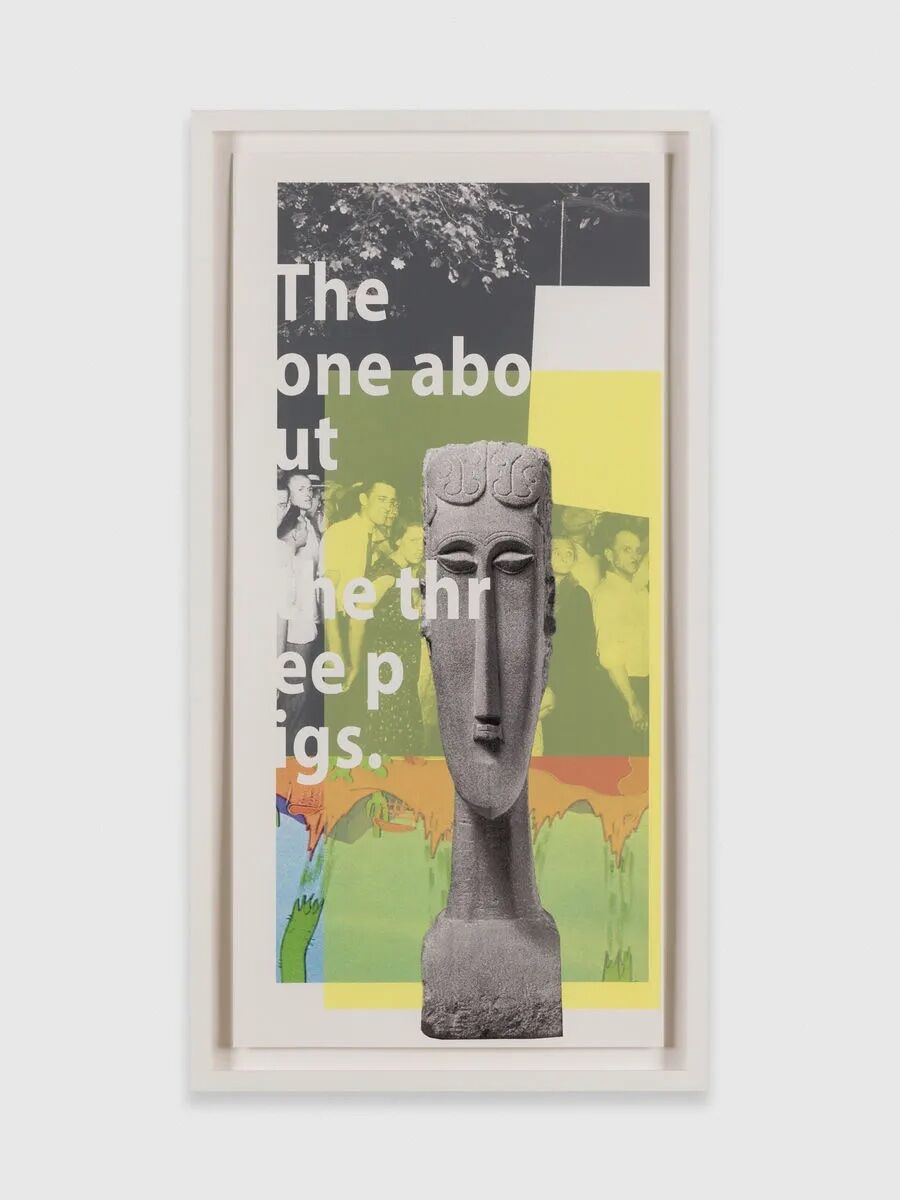 The conventional set-up of both comedy and tragedy tends to be the same: a social or political problem persists due to forces beyond individual human control (the set-up), a character takes on this problem in an attempt to offer solutions, expectations are subverted. In tragedy, the hero pays a debt to the cause; in comedy, the protagonist draws attention to the ridiculousness of the situation, often calling for a need for a shift in cultural values. Thus, the set-up may be accentuated as a framing device; however, the notion of being set-up or being framed can exist either as a comedic trope (“I’ve been framed!”) or a tragic debt to be paid that is (sometimes) recorded in the annals of history. A set-up without resolution risks a potential misattribution of voice, not necessarily withholding catharsis, but denying a corrective — a failsafe temporarily overridden. 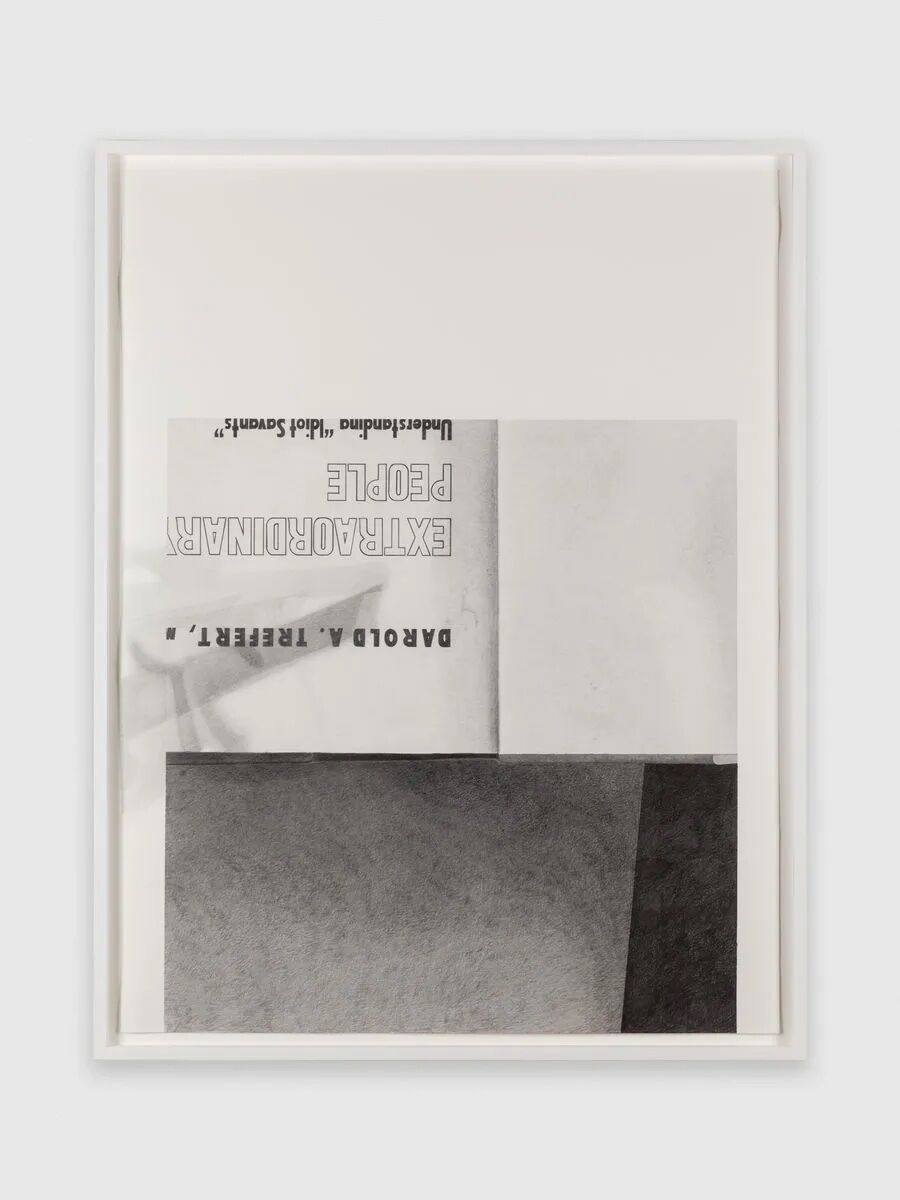 There exist many theories of humor dating back to antiquity: perhaps humans laugh when feeling superior; comedy might exist as a form of social relief. Around the turn of the 20th century, however, philosopher Henri Bergson proposed a theory of comedy rooted in fluctuation that seems important in moments of shifting societal values. Leaving aside Bergson’s technical analysis of humor as the result of a slippage in the modern tendency to employ spatial thinking to fundamentally durational processes (sexy though this analysis is), most important here is Bergson’s claim of laughter as a means of regulating society: we laugh in instances where we see the “mechanical encrusted upon the living,” a socially acceptable punishment for the existential threat posed by robotic distortions of natural processes. I mock the ideologue (or their oblivious, uncritical devotee), because I instinctively recognize his artifice and resemblance to automatism.

When offered a lexicon of framing devices in the form of the set-up, the pedestal-as-artwork, the PDFs, I am left alone with the mechanism (or thus, mechanization) of the voice. Denied the punchline or resolution, acutely reinforced by my vantage point as a twice-removed audience member, I am without the necessary means to parse the distinction between artistic voice, comedic voice, historical voice, or institutional voice; I am temporarily suspended above the elasticity of shifting and moving parts. Forced to sit with the set-up— or in my case, layers of set-ups — I am left to wonder what the resolution that prompts the new societal safeguard might be. To tie the machinations of satire to fixed points would be to miss the durational shifts (in irony, these would be the emergent oppositional values) perhaps unintentionally tipping the comedian into the realm of the tragic figure.

An Oral History with Nyeema Morgan