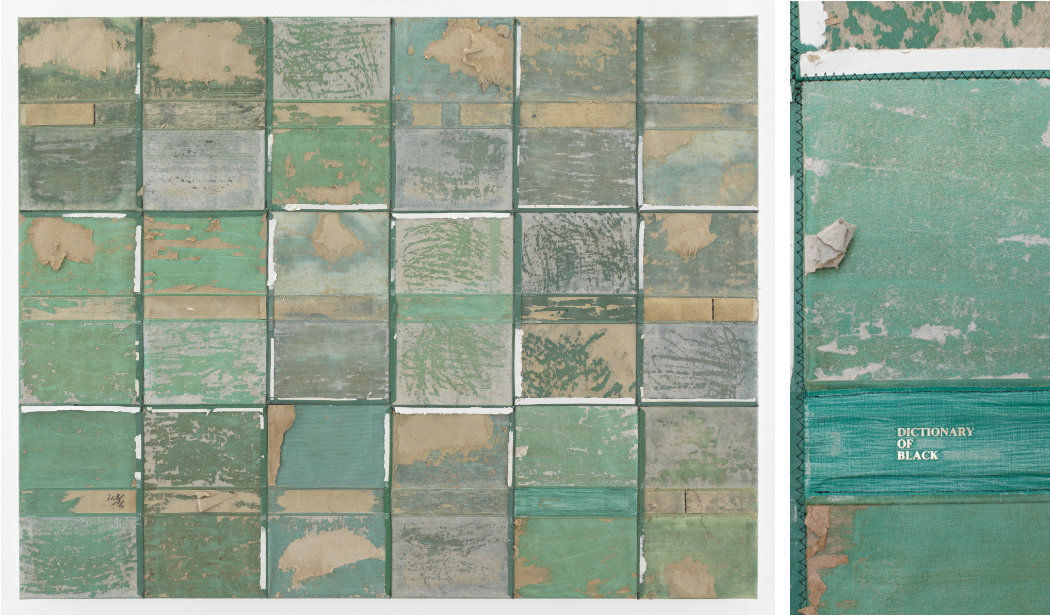 “Burning All Illusion,” opening at Galerie Lelong on December 8, is Samuel Levi Jones’s first solo exhibition with the gallery, showcasing a number of the artist’s works made from deconstructed institutional and academic books. The day before Thanksgiving, Jones took the time to talk to Artinfo about his upcoming exhibition, only mentioning at the end of the conversation that he was actually in the car with his family, en route to spend the following days with the protestors of the Dakota Access Pipeline at Standing Rock Indian Reservation. Below, he talks about his work, this journey, and being aware of one’s surroundings.

I’m interested in hearing about the books you use to make your work. When did you first begin working with them and what do they contribute as objects or materials?

The first time I used books in my works was 2011. I was working on a piece in grad school that was a reacting to Gerhard Richter’s “48 Portraits.” I discovered that his source images were from the encyclopedia and it lead me to start looking into encyclopedias. The very first set of books I got was from 1972, which was the year that he first showed that work. I was really just going through the volumes page by page, and taking note of the representation of people within it — it was predominantly white males. There were very few women, and very few people of other ethnicities. So after that I made my own portrait series. First by making my own paper that I’d recycled from these books, and then creating images on this paper that I sourced from other places. 24 black men and 24 back women that could have been represented that year, but weren’t. That was really when I started thinking about sources of information and the control of information in terms of how we construct narratives and histories, and particularly those who are left out of this. The piece was was called “48 Portraits, Underexposed.”

What was the progression from using books as material in that work, to the work you’ll be showing at Galerie Lelong?

Some of the work in the Lelong show is actually from a little over two years ago, from when I first started using law books. So there’s a good deal of the work that’s from that source material, and then this past summer I was offered a group of African American reference books from UC Berkeley’s African American Studies Department. The new work is made out of these. This was a way of a way of bringing in those histories and narratives that are often left out of, for lack of a better word, “mainstream” reference material. In these pieces, I’ve left some text visible, which I’ve never done before.

Right, in previous works you’ve eliminated the cover information on the books. Why did you decide to include text now?

I think that originally I was more focussed on the material — just in creating something visually interesting to spark conversation about the concept. But I don’t want the viewer to come to the work and just simply see them as artworks made from books and then leave it at that. So here, I was messing around with making words and phrases and even redacting the text of the books and then putting them back together. I want it to have some mystery about it, so that the work will maybe challenge viewers, hopefully causing them to question what is going on so that they would stick with it and spend time with it.

This exhibition has, of course, been in the planning stages for a while and this is work that you made prior to the 2016 election. I’m interested in hearing your thoughts about exhibiting it so soon after this event, in this political climate.

This time… it’s tough and it’s interesting. It seems like, generally speaking, people who have been comfortable and settled, are now a lot less comfortable, if that makes sense. Something happened to us, where it’s like suddenly more people feel affected by what’s going on, and are giving more attention to the social and political things happening around them. I find that interesting. This is a time where people are being challenged, and hopefully they are feeling challenged, rather than just going about their day and time as usual, because yes, a lot of things are going on but a lot of these things have always been going on, and maybe we haven’t had as much consciousness of them. Maybe what’s going on now is creating consciousness. It’s something that’s important in my work, so it’s interesting to see that right now — people paying attention to what’s happening around them, rather than ignoring it.

Along the same line, can you tell me about your exhibition that was on view last year at the Indianapolis Museum of Contemporary Art called “After Fred Wilson,” and the significance of that title?

Well back in 2009 or 2010 Fred Wilson proposed this public project. In this circle in downtown Indianapolis there’s a Civil War monument with this figure, a slave, sitting on the ground subservient to the soldiers, holding up the shackles he’s been freed from. And Wilson was going to recreate this figure as a public work where the figure, instead of shackles, would be holding the flag of African diaspora. A lot of people were in opposition to the project. People from the black community, too. One of the things they were saying was that he could make the piece but that it shouldn’t be in a public setting or it shouldn’t perpetuate this figure. People were against it, rather than realizing and understanding Wilson’s way of working with these things and recontextualizing them. So I was highly disappointed when the plans didn’t go through because for me, growing up, I didn’t have access to the art world or to the arts. I grew up in Marion, Indiana, which is a small working class town. And I was thinking about people who don’t have access to museums or wouldn’t be inclined to go into a museum, and how someone might be walking down the street, would see this thing, and, being curious, might read a plaque or whatever information was there and learn about the work, and understand something. This had a huge potential to bring people to the arts. So I was disappointed and I decided to title the show “After Fred Wilson” because I wanted the conversation to continue, I didn’t want to just let it die or let it be ignored. The work included in that show had actually been exhibited before. One piece is titled “Talk to Me” and it’s made from California law case text books. It’s a large grid piece and it will be in the Lelong exhibition as well.

What else do you have coming up at the end of this year and into 2017?

I’m doing a project at a press in Berkeley, Paulson Fontaine Press. We’ll be working on that at the beginning of 2017. And then in the spring I have a show opening in LA.

At the moment, I’m actually with my family on my way to Standing Rock. We’re going to be there at least until Saturday. We’re going to pick up some items on our way — they need warm clothing and things like that. I mention it, because of how my own practice, how making things, has created a greater consciousness within myself, if that makes sense. I’m always living with the work and material around me, I can’t escape it. Lately I’ve been feeling the strangeness, with Thanksgiving coming up, that we celebrate this holiday, while at the same time this thing is happening in Standing Rock that just shows us perpetuating the evils that we’ve been carrying out for centuries. So I felt inclined to go and be a part of it. I have two daughters that are eight and ten years old. It’s important to expose them to this, to create consciousness within them, so that they have a different path forward.
Samuel Levi Jones