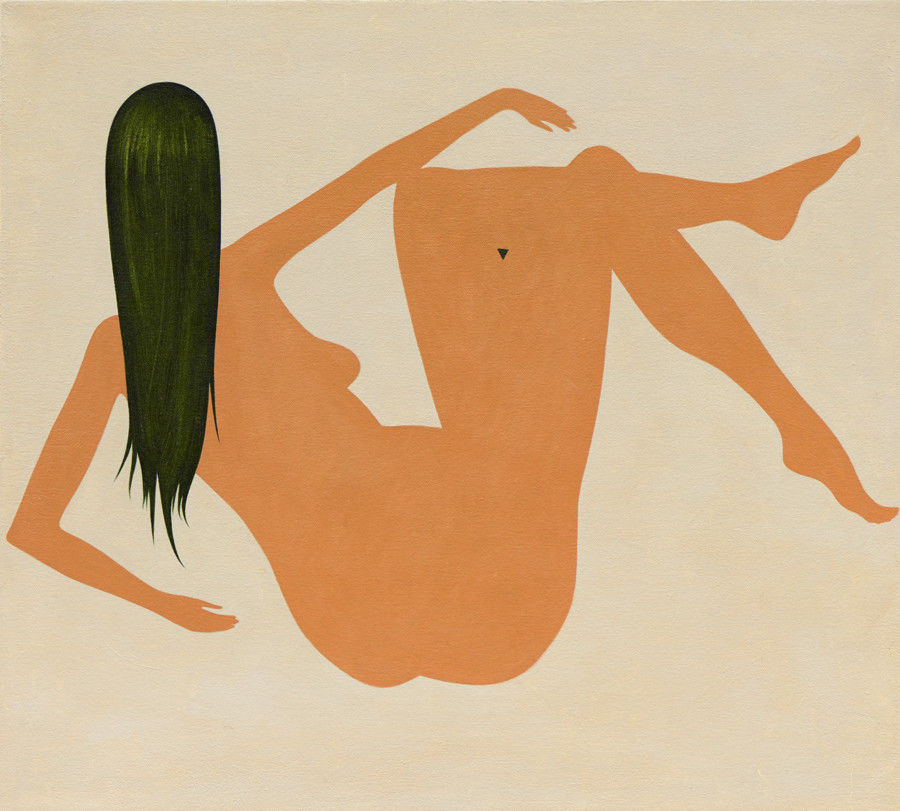 Alice Tippit’s meticulously crafted paintings mimic those fleeting moments in life when we catch a minuscule glimpse of something, such as the suggestive glance of a passer-by on the street. Her canvases are rendered in muted hues punctuated by flashes of deep blue, burgundy or black. Within the artist’s tightly cropped images, bodies and objects become cryptic silhouettes. Often, the paintings deliver an elusive erotic charge. In Lure (2016), for example, stars glow in the hollow between two milky greige legs. Mauve-coloured negative space pushes in on these limbs, while the inky firmament tapers upward, stopping just shy of the picture’s top edge and the unidentified character’s genitalia.

The atmosphere of Tippit’s paintings in her show ‘Woman on Yellow Motorcycle in Crystal Lake’ is one of furtive titillation: here, a wisp of hair falls down an exposed back; there, a purple breast emerges from behind a yellow vase. At the same time, the artist’s graphic language and careful tuning of colour persistently return the viewer’s attention to the painting’s surface – a material body with its own strange fetish power. In Stroke (2016), a coral-orange human figure poses in a uniform taupe ground. The work mimics the odalisque tropes of 19th-century French painting. In contrast to the contoured bodies of Jean-Auguste-Dominique Ingres or, later, Henri Matisse, however, this figure is a crisply delineated silhouette. A tiny dark triangle floats on its folded legs, near the figure’s knees: a short-hand for the pubic region that recurs in other paintings on view. It’s the figure’s head that sticks in mind, though: turned away from the viewer, its long black hair is striated with green highlights. The pose evokes a subtle parody of figure painting’s traditionally misogynistic attitude to the female nude.

Occasionally, Tippit’s earlier work has slipped into cuteness, blunting the critical potential of her pictorial games. Here, this happens only once: in Still (2016), a painting that features an apple painted in caucasian flesh tones. The artist may be making a witty comment about painting’s tendency to reduce bodies to inanimate objects, but the entirely literal depiction of the apple, combined with its dead-centre placement in the canvas, muffles the humour with safe quaintness. Summon (2016), on the other hand, achieves a weird and vexing personification of shape. Here, a chalky Naples-yellow crescent floats in a deep umber: embellished with a pair of pursed red lips, it mimics a human grin. Layering a cliché of figuration over a droll allusion to it, the painting is a descendant of René Magritte’s symbolist scenes, which mix impertinence and wonder to uncanny effect.
Alice Tippit

Set in Stone: At 86, Sculptor Kay Hofmann Is Making Waves in Chicago

At Miami’s Art Fairs, a Somber Mood Sets In