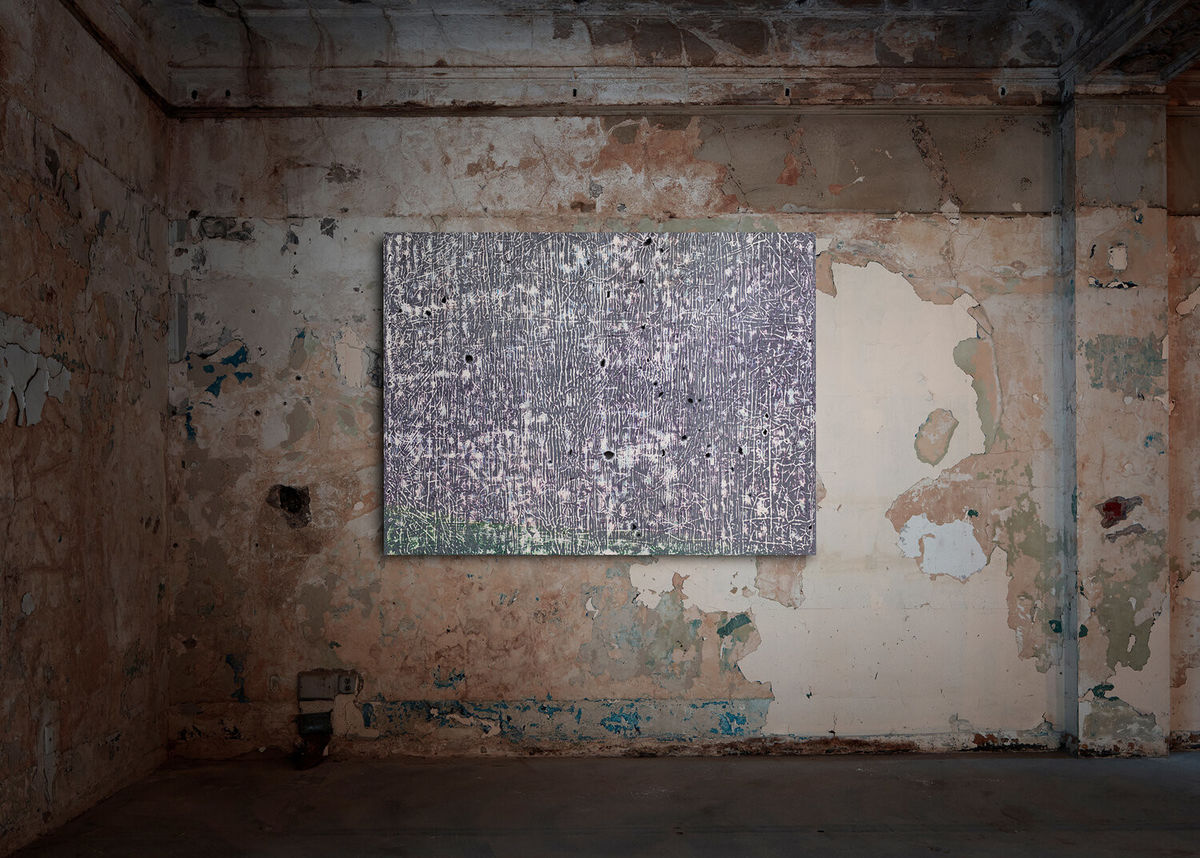 Kadar Brock’s guts the wanderer, guts by the sea, the artist’s hand paints the world, the egg of the king, i wish i was albert oehlen. (Image courtesy the artist and Library Street Collective; image and rendering by James Haefner)

Detroit fine art gallery Library Street Collective has launched a new online exhibition that grants virtual visitors access to the city’s most prized—and in some cases, forgotten—examples of historic architecture while showcasing a range of works by an exciting and diverse coterie of contemporary artists.

SITE: Art and Architecture in the Digital Space, in the words of Library Street Collective, fosters “a unique digital connection between the visual arts and the built environment, incorporating aspects of storytelling, architectural history and an artist’s unique perspective.” Key in bringing SITE to life was architectural photographer James Haefner, whose evocative photographs of Detroit landmarks serve as a backdrop for the aforementioned artworks to be inserted. As Library Street Collective emphasized in a statement, the exhibition is wholly digital, meaning that the “art displayed is skillfully and seamlessly rendered into its environment” without any on-site installation work. The gallery also noted that this type of virtual exhibition is ultimately a more environmentally friendly one when compared to conventional, site-specific events as it removes carbon-intensive “exhibition transit from the equation.”

The inaugural itineration of SITE kicked off last week within the walls of McKim, Mead & White’s State Savings Bank, a downtown neoclassical gem also known as the Savoyard Centre that was completed in 1900. Added to the National Register of Historic Places in 1982, the building, much like Detroit’s sizable stable of historic structures, fell into an advanced state of disrepair during the latter half of the 20th century. Used as a bank for most of its existence, the 72,000-square-foot structure (a seamless Donaldson and Meier-designed addition was completed in 1915) was acquired by office supply company Silvers Inc. in 1980 and used as a showroom. Silvers decamped from the century-old building in 1994, which led to a nearly 25-year stretch of abandonment. Following an extensive renovation spearheaded by Bedrock Detroit, the State Savings Bank reopened its doors in 2018 for Doug Aitken’s site-specific installation Mirage Detroit, presented by Library Street Collective.

“The State Savings Bank is reflective of a number of historic structures in Detroit, built at the height of the city’s cultural and industrial peak in the early 20th Century,” said Library Street Collective. “These structures were representative of unprecedented prosperity at the time of their conception, but fell into disuse after decades of the economic, racial and social inequality that was widespread across America, but particularly exploitative and polarizing within Detroit.”

Future SITE exhibitions will take place in “buildings designed by notable architects such as Minoru Yamasaki and Albert Kahn, to those that once housed the automotive industrialists of Detroit’s past,” per Library Street Collective. “They will include some of the most significant and historically important structures in the Detroit area, each with a unique story to tell.”
Back at the State Savings Bank, the artists showing as part of the maiden SITE exhibition are: Daniel Arsham, Kadar Brock, Greg Fadell, Simphiwe Ndzube, José Parlá, Rachel Rossin, Phillip K. Smith III, andKennedy Yanko. You can view each of the artists’ contributions to SITE above, while the exhibition website includes artist statements and additional works for sale by each individual artist. Ten percent of the sales from the first iteration of SITE will be donated to the Ruth Ellis Center, a Detroit-based nonprofit that provides essential services and support to homeless and at-risk LGBTQ youths and young adults of color in southeast Michigan.

“The whole idea of the SITE exhibition is that it is non-physical, but it is still emotional; we still have a response to it,” said California-based Phillip K. Smith III, whose light-based work Portal 8 is now digitally on display at the State Savings Bank. “We’re curious about it and ask questions about what we’re looking at—typical questions we would have when looking at an exhibition—yet it’s beginning to push the idea of how work can be assembled in the digital space while dealing with very true physical objects.”

Despite the fact that its physical space in downtown Detroit has been temporarily shuttered during the COVID-19 pandemic, Library Street Collective has been busy in recent weeks. In addition to launching SITE, the gallery garnered headlines in March for a two-week-long initiative in which it provided nutritious dinners-to-go to local school kids. Each meal was accompanied by a coloring book—and colored pencils and a sharpener—featuring line drawings by the likes of KAWS, Nick Cave, Shepard Fairey, Virgil Abloh, Doug Aitken, and others including several Detroit-based artists. Library Street Collective’s WE ALL RISE coloring books are now also available to download as e-books or can be purchased in print form with all proceeds benefitting Forgotten Harvest.
Kadar Brock