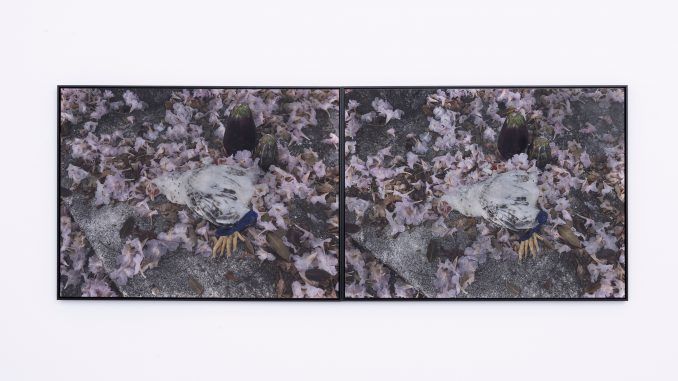 Harold Mendez’s “The Days of Yesterday Are All Numbered in Sum” (2017) is an archival pigment print and graphite mounted on Dibond. Photo courtesy of Jeff McLane.

A large, grayscale depiction of a dewy spider web suspended between branches greets visitors to the Institute for Contemporary Art at VCU. It appears cracked like a sheet of glass due to the unique transfer method used to create the image.

“At Night We Walk in Circles” sits on the wall outside of the Beverly W. Reynolds Gallery in the ICA as part of the site’s newest exhibit. Harold Mendez’s “Let Us Gather in a Flourishing Way” opened to the press Friday and to the public over the weekend.

The exhibit is a collection of sculptures, photographs and prints by Mendez and includes works from the past 10 years. Many of the works draw upon themes of movement, migration and cultural connections across borders while evoking senses of ephemerality, vulnerability and fragility.
“Mendez invites us to explore the tension between fiction and truth, visibility and absence, and how history and geography shape our sense of self and our relationship to the world,” stated Jessica McCadden, spokesperson for the ICA, in a press release.

Mendez is a Los Angeles-based artist and has traveled extensively throughout his career. Dominic Willsdon, executive director of the ICA, noted that Mendez’s parents are from Colombia and Mexico, and that as a first-generation American, the geography of Mendez’s lineage is significant and apparent in his work.

The exhibit’s name is borrowed from the first line of a poem of the same name by Juan Felipe Herrera, an American poet and the 21st United States Poet Laureate. Each of Mendez’s works is inspired by poetry, which is part of what drew the ICA toward the exhibit, Willsdon said.

Willsdon said that the ICA has interest in artists that incorporate literary elements into their work. All three current exhibitions at the ICA — “Harold Mendez: Let Us Gather in a Flourishing Way,” “Fernanda Laguna: As Everybody” and “Kandis Williams: A Field”— feature artists that utilize a crossover with literature. 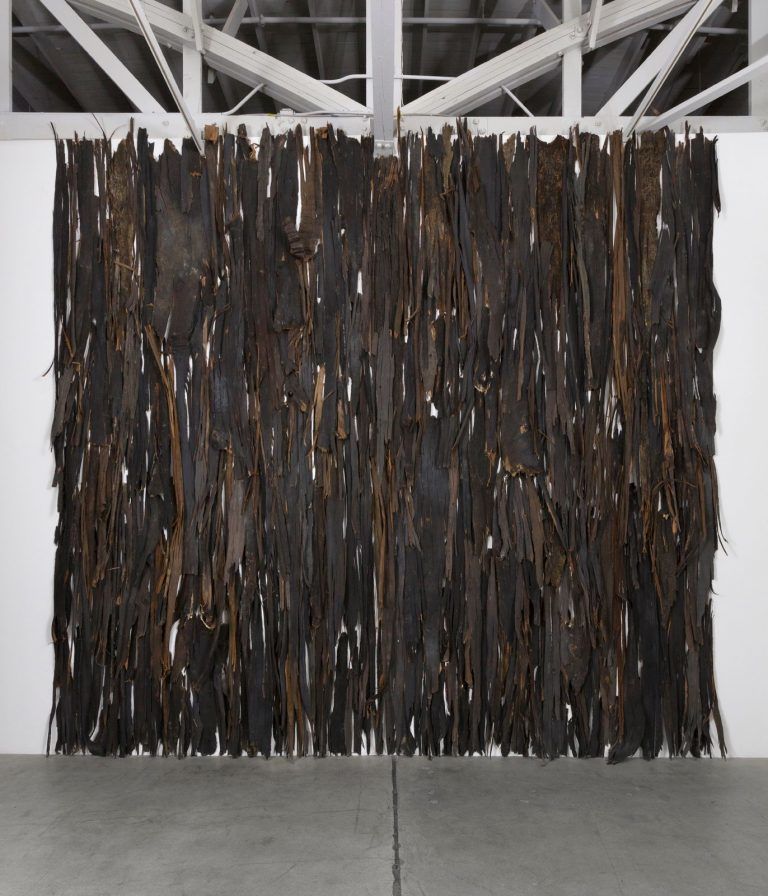 Harold Mendez’s “Let the Shadows in to Play Their Part” (2012) is made of eucalyptus bark. Photo courtesy of Jeff McLane.

Many of the pieces in the collection are made with “found” objects. “At Night We Walk in Circles” stems from a photograph of a spider web that Mendez found. It was created using a transfer method, in which the photograph was placed face down on a painted sheet of aluminum. The layers of paper behind the photo were removed until the image was once again visible.

“A lot of the sort of mystery and enigma around the work comes from the different ways in which the image is being veiled,” Willsdon said.

Another veil exists in “Let the Shadows in To Play Their Part,” a towering mixed-media painting that is composed of eucalyptus bark, silicon carbide, ink and latex paint. With dimensions of 140 by 240 inches, it is the largest piece in the exhibit, spanning the full area of a dedicated wall that was erected in the center of the gallery.

White fragments peek out of the veil of bark, which was created while Mendez completed an artist residency in San Francisco. The bark was collected from trees in the Golden Gate State Park, Willsdon said.

While at first glance, the gallery may appear to be bleak and devoid of color, the rich pigments of each piece reveal themselves as one looks more closely.

“American Pictures” is a sculpture containing a piece of wood impaled by a metal rod, standing in a metallic base. The wood is dyed a deep red from crushed cochineal insects. Scattered across the base are white carnation petals, which serve as a delicate complement to the cold metal they rest upon.

Willsdon said the carnation petals will be replaced by museum staff as they wilt in order to keep the piece alive at the request of the artist. 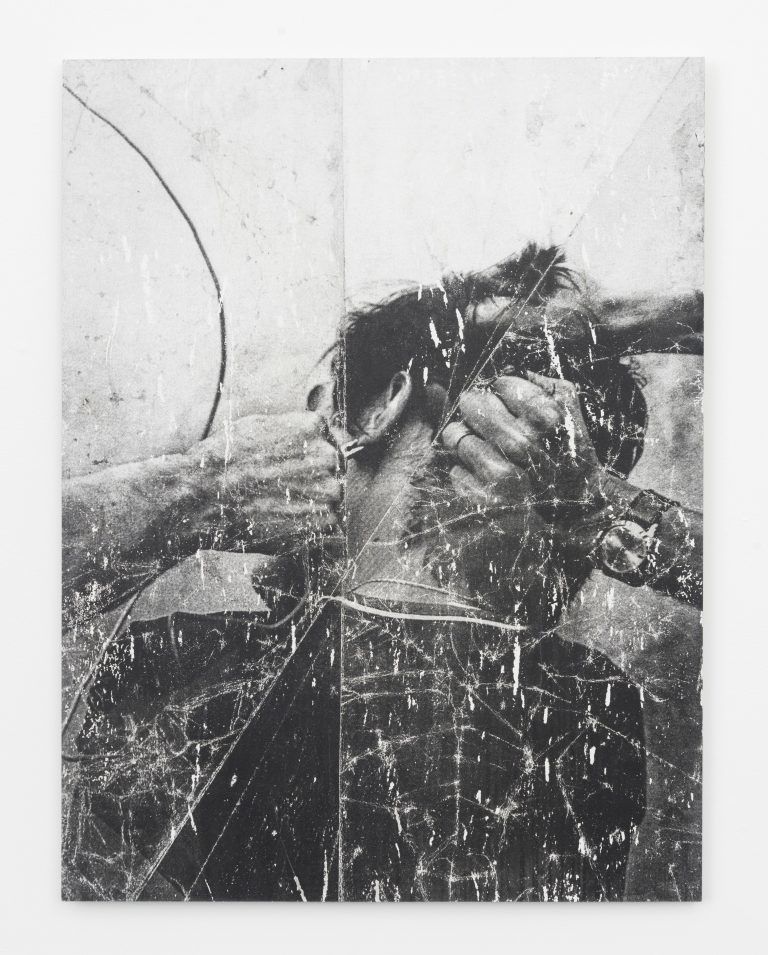 Harold Mendez’s “Let X Stand, If It Can For the One’s Unfound” (2016) is a mixed media piece mounted on Dibond. Photo courtesy of Jeff McLane.

“He was also interested in what it would mean to add something to a sculpture that meant the museum had to care for the sculpture,” Willsdon said of Mendez. “It becomes almost like the museum develops a sort of intimacy with the work, having to deal with and care for it in that way.”

Like the vulnerability and fragility displayed in “American Pictures,” another pair of sculptures, “Domingo” and “Margarita,” evoke similar emotions. They are two headdresses composed of materials such as animal fat, feathers, glass and the foam lining of a baseball helmet.

Willsdon said that the pieces pay homage to Mendez’s parents and match their heights down to the quarter-inch.

“There’s sort of a sense of loss and melancholy that people feel, and even with the two standing figures of the parents there’s a sort of ‘Are the parents still with us? One day they won’t be with us,’” Willsdon said. “There’s a sense of passage of time and potential loss.” 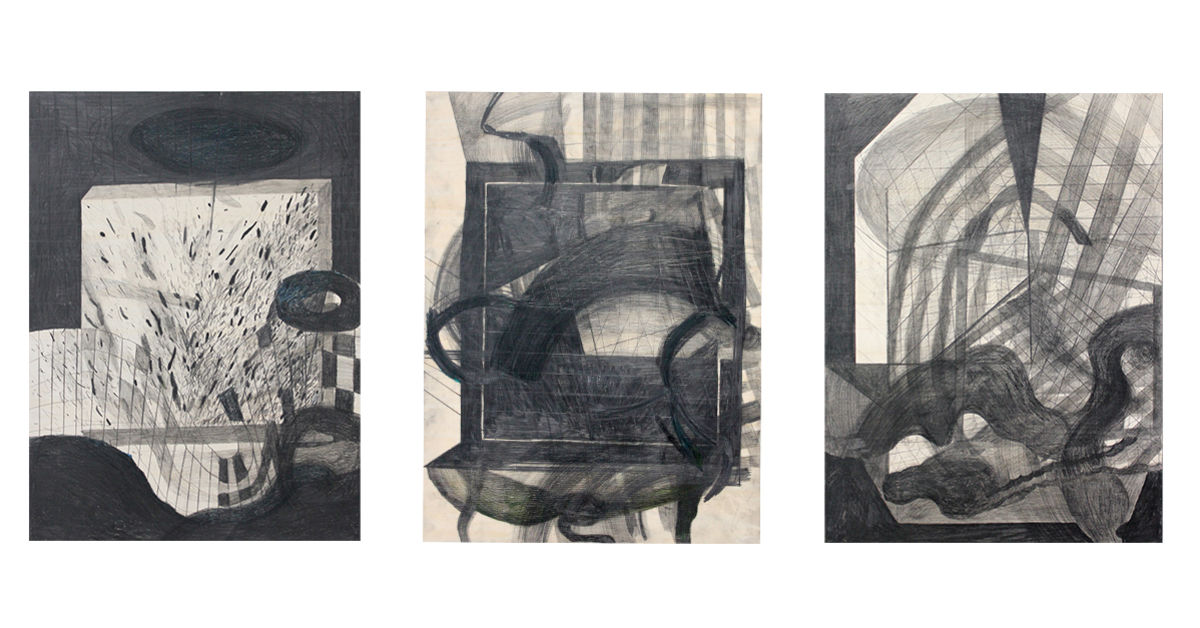 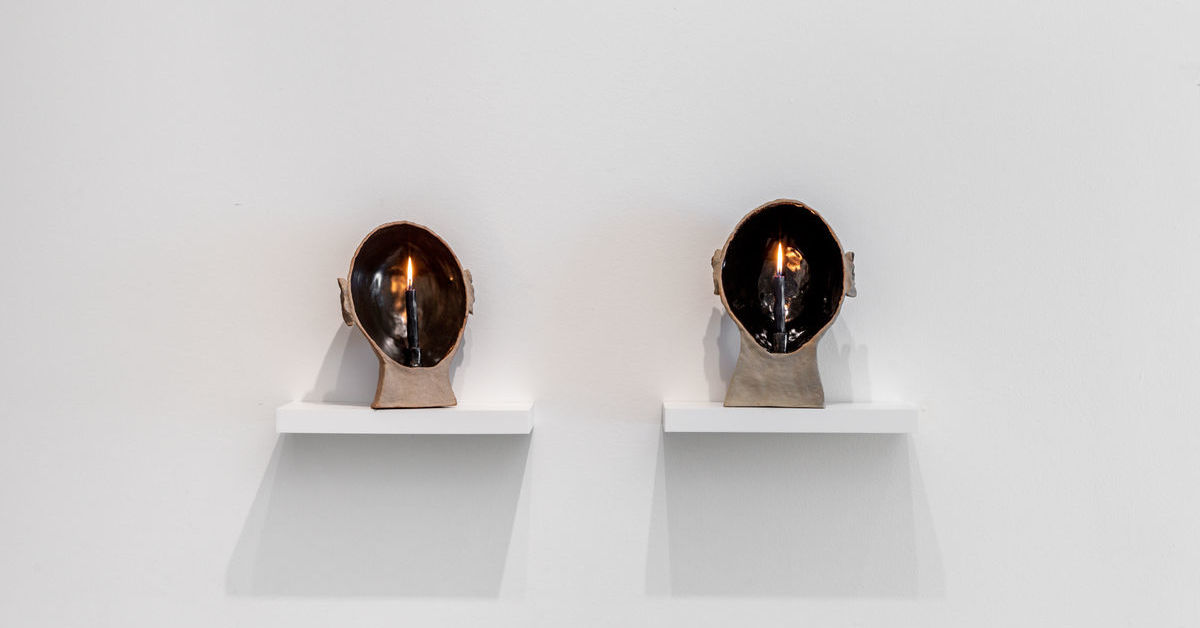 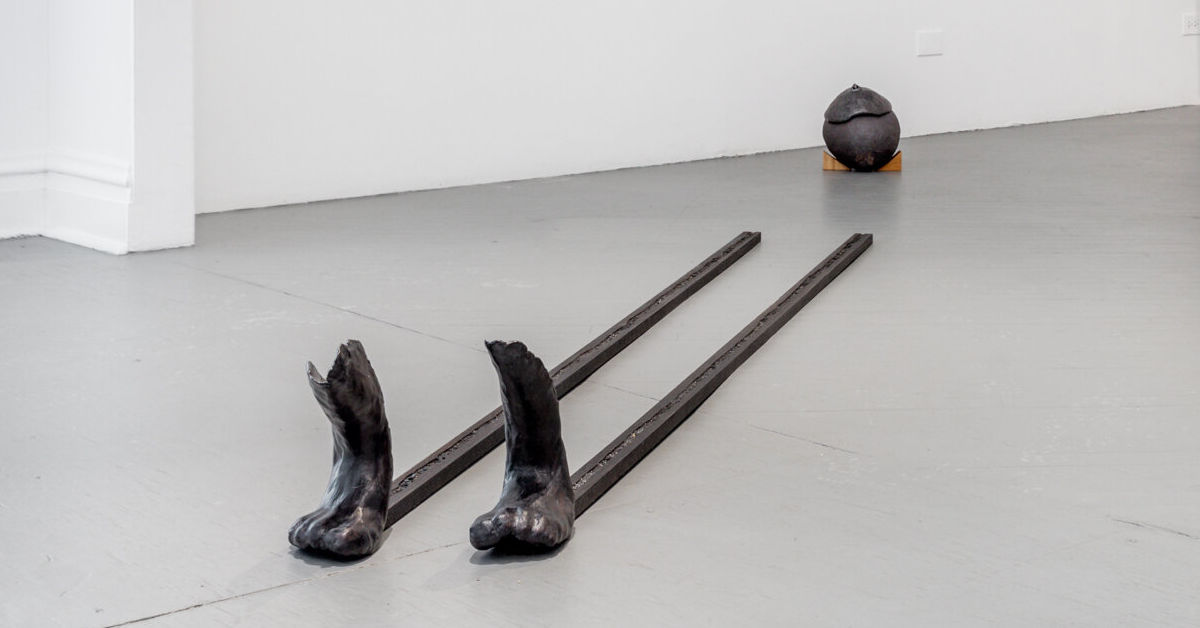