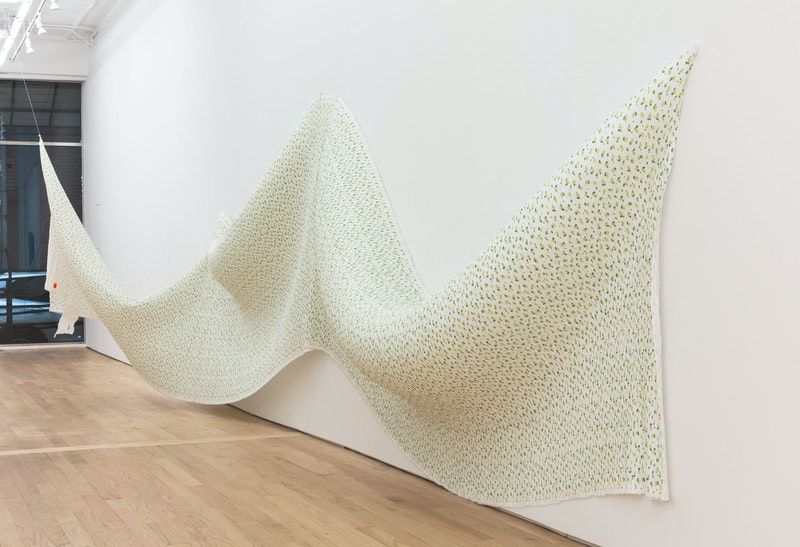 Absent any punctuation, How to Get Free of the Rectangle reads as a directive. Decades ago, it might have been a longing question, but now painting’s rectangle has been bent, torn, re-sewn, and looped in on itself, so it might be easy to scoff at the premise and how far removed it is from the radical. But this modest survey accomplishes a small miracle: it justifies painting’s bullish intrusions into other mediums.

In the opening room, two pieces promise divergent approaches: Eric Mack’s Bodice (2022), a length of polyester tacked and billowing along the wall, and Liz Larner’s Asteroid (Jones) (2020), a weighty ceramic dripping with glaze. While Mack’s installation is a blur—as if flatness had been loosened into performance—Larner’s ceramic compresses color and form so that its dimensionality seems a crumpling of the picture plane. Here are two poles of painting’s materiality: the airy and the earthy, one bound to the stretchy grid of textiles, the other hardened in the kiln. And, if method leads to affect, two separate attitudes are apparent: Mack’s playful expansion of the rectangle and Larner’s refusal to engage with it at all, a claim to pigment’s ability to exist as its own substrate. 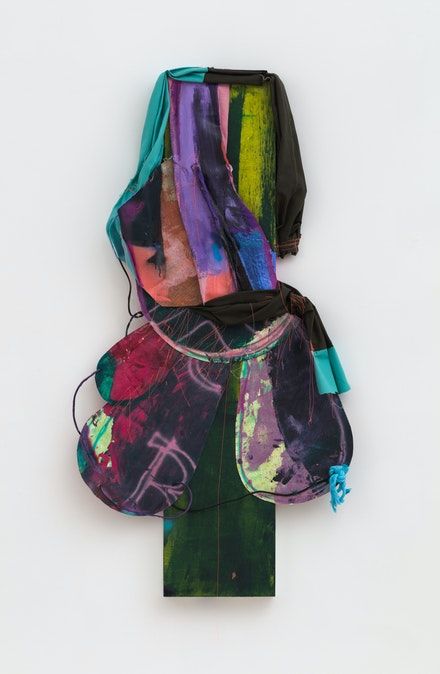 Painting’s propensity toward the rectangle is relatively recent; it has to do with a shift from the spiritual to the domestic. Cave painters were working in multigenerational layers, using uneven rock walls as compositional devices; Giotto’s chapel in Padua is a giant blue arc that overwhelms peripheral vision; even the frescoes in Pompeii stretched across entire rooms, and the fact that we experience them as neat cutouts has everything to do with decisions made by archaeologists and museums. If Larner’s Asteroid takes painting back to its mineral roots, then Mack’s Bodice propels the decorative impulse onto the body. That is the spectrum: from the geologic and the universal to the everyday, a movement toward tenderness. I’ve never seen painting presented in such clear terms. The rectangle, as form, is a momentary fascination—painters can return to a past absent its influence, where color came from the earth and was scrawled across walls; or they can pull at its warp and weft, build on its complexities.

Color is form, and textile is form. From that gate, the work expands. Susan Cianciolo’s patchwork piece, with its wooden center, reverses the hierarchy of stretcher and canvas, like a quilt building into a campfire or a checkerboard spiraling into incantation. Harold Mendez’s Carrying Over (2022) is a fragment, a tree limb struggling against an iron fence. Its grid, blackened by cochineal, indigo, graphite, and charcoal, shows the manmade and the natural bending into a vulgar crucifix. Rachel Eulena Williams, one of the most important painters of this generation, is represented by a single work, Reflective Blue Petal (2022)—a flourish of fabric against a deep green canvas, a pink string as plumb line, meticulously painted staples, and sketchy embroidery against brushstrokes, like jittery static in a landscape. The composition recalls a Greek herm in its conflation of architecture and figuration, expressionism budding out from structure, the rectangle almost a feeder for acts outside its bounds, the unravelling of its grid. It would have been productive to see Eulena Williams’s work next to artists such as Mónica Palma and Kemar Keanu Wynter, whose formalisms are involved in the local, as performative interventions or systematic abstractions of memories. 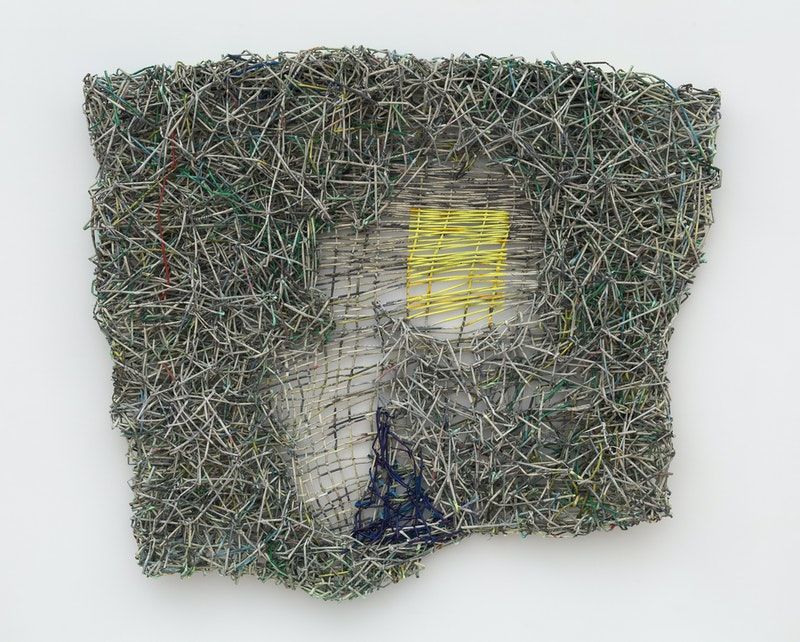 At the show’s center is Savannah Knoop’s Leap Year (October/November/December 2020/January 2022) (2022), a piece that unifies the two impulses toward hardening and pulling apart. Knoop has rolled New York Times pages into strands, dipped them into resin and pigment, and woven them together. The result is a nest of language, garbled and specific. Words jump out: history, Covid, hybrid, dream; then parts of words, cropped by the roll, amon—, log—, dis—; then single letters, drop caps, uppercase, lowercase, O, t, S. It all disintegrates, one line of prose running into the next, knots pulling type into concentrated abstractions. Phrases are pulled into nodes of gibberish, and Knoop’s hand acts against meaning. In front of this mass of news, there is the sense of the recursive, the inevitability of history’s dumb repetition.

If painting exists in the shadow of the rectangle, these compressions and expansions reflect something about our time. In the last two years, the domestic became the universal, and these works, in their investigations of the medium, show how art will continue to blur those boundaries. Free of the rectangle, painting seems necessary and tender.
Harold Mendez How to Get Free of the Rectangle