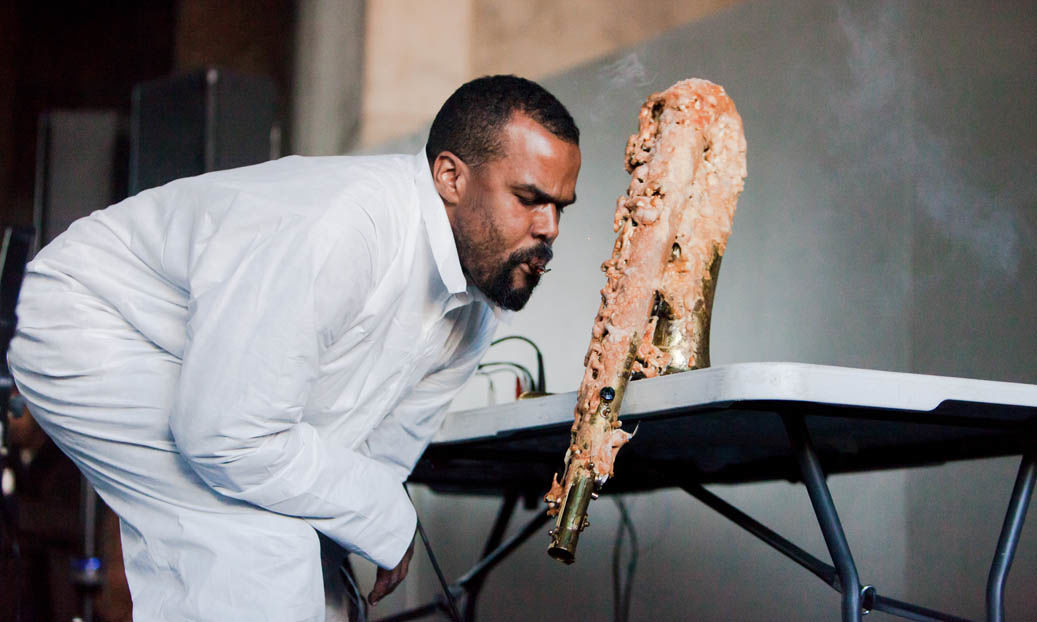 Jamal Cyrus in his performance, Texas Fried Tenor, part of his series Learning to Work the Saxophone. Photo by Liz Ligon.

In many ways, Jamal Cyrus’s artwork feels like a meditation on the nuanced and lesser known experiences of Black American history and culture. In his exhibition FOCUS: Jamal Cyrus at the Modern Art Museum of Fort Worth, the Houston-based artist dives into what he calls the “sonic territory” of a region. With music as the vessel, and Texas’s Trinity River Basin as the site, Cyrus seamlessly translates historical information into aesthetic form, engaging with sculpture, drawing, assemblage, and sound. As I stepped into the gallery space to view the site-specific installation, I was transported far outside the walls of the institution to a sprawling landscape rich with possibility. From jazz to blues, Cyrus underscores the crucial role that artists’ environments play in Black creative expression and cultural production. I spoke to Cyrus via video conference during the final week of the exhibition to learn more about the show’s body of work. This interview has been edited for length and clarity. 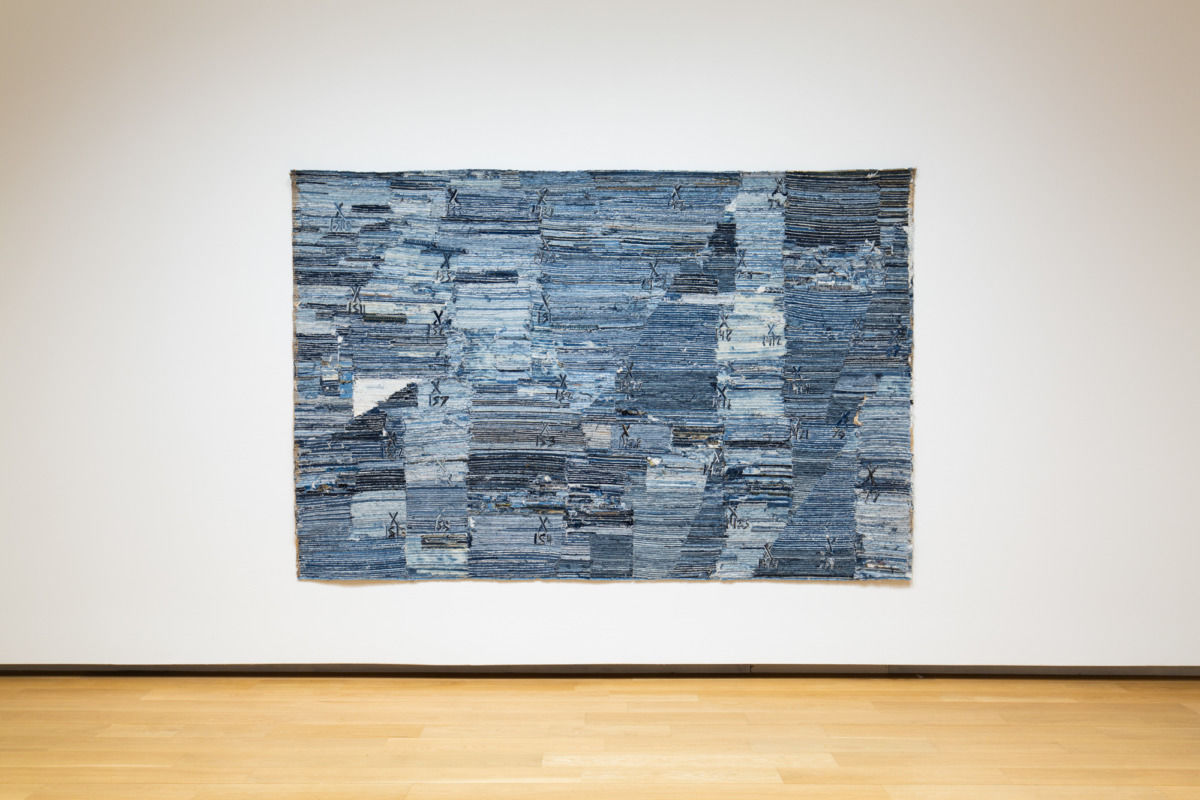 Daria Simone Harper: Throughout this exhibition, you’re thinking a lot about the lineage of jazz musicians who have come from the Dallas-Fort Worth Metropolitan Area and the musical cultures which have been developed in this region. Why did you decide to center this show around the work of musician and composer Julius Hemphill?

Jamal Cyrus: There’s a couple of things. Some of the works in this show are part of a larger body of work that I’ve been doing for a little while called Learning to Work the Saxophone. So I do these portraits or focuses on individual saxophonists and their approaches to the instrument. Within the jazz tradition and Black music, generally, there’s this idea of always pursuing a unique voice. All of these musicians really do add something. I also wanted to focus on Hemphill because the show was in Fort Worth. He’s one of the many musicians who came out of Fort Worth and he definitely made incredible contributions to the field.

One of the other reasons is because around 2006 or so, I received a copy of this piece called “The Collected Poem for Blind Lemon Jefferson,” which was a collaboration between Julius Hemphill and a poet named K. Curtis Lyle. It was a combination of free jazz aesthetics but also this folklore about the father of the Texas blues, Blind Lemon Jefferson. That really struck me because it’s something that I’m seeking to achieve in my own work. This mixture between these different creative traditions.

DSH: FOCUS also reflects deeply on an agricultural term, “alluvial soil,” which is described as rich, fertile, and highly porous soil. Can you talk about how this body of work investigates “alluvial soil,” and why engaging with environmental landscapes might be an especially useful way to think through musical—and other cultural—landscapes and histories?

JC: It started with the blues. I was wondering, why do you have a Chicago blues and a Mississippi Delta blues? Why are there Arkansas blues and Texas blues, and why do they sound different? 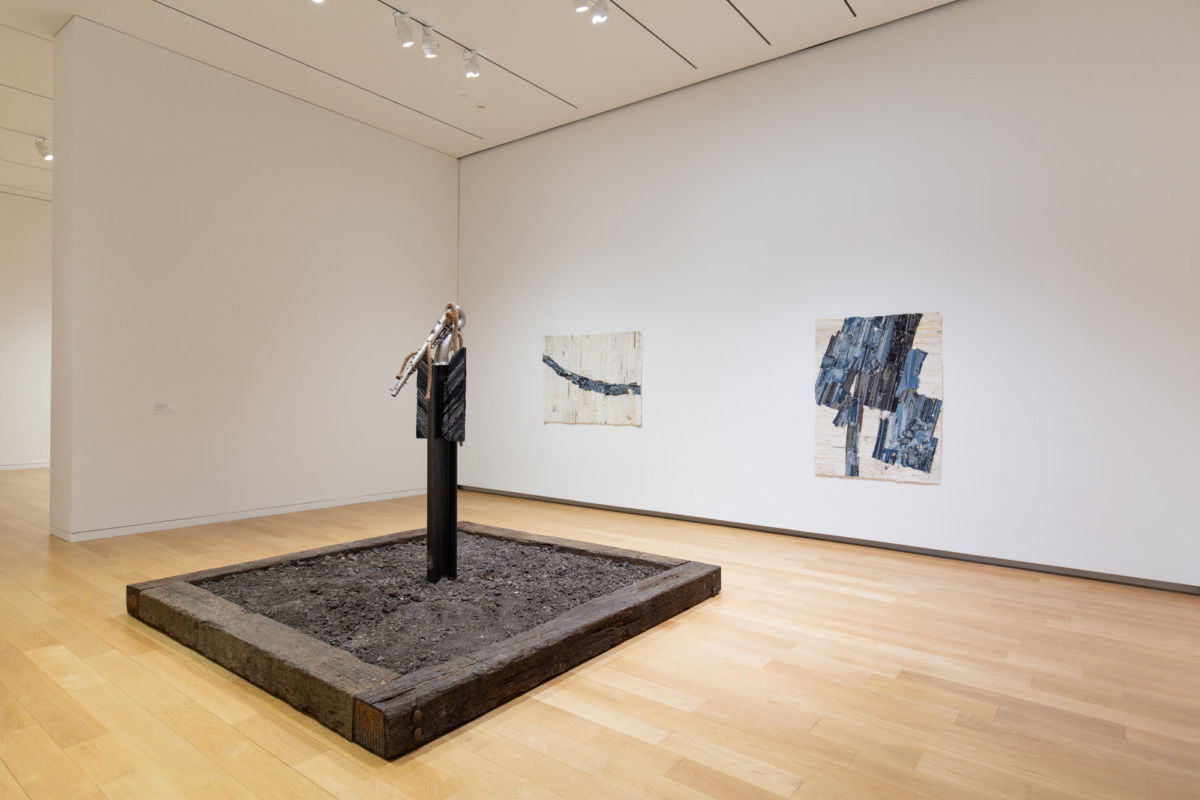 DSH: You incorporate a range of materials associated with both agriculture and sound, including cotton, denim, records, and piano keys. Can you talk about the significance of these materials?

JC: This is an old idea, but materials have a vibrational quality, and they also have a communicative property or quality. Those are the kind of materials that I send my feelers out for and those are the materials I’m most attracted to. I set up simple processes where I can transform those materials slightly, but they still kind of have their qualities that we talked about.

Touch and accumulation are really important to my work. I strive to have a sense of time within the work, a sense of building or layering. Sometimes it’s very clear what the materials refer to, but sometimes it starts off one way and gets more nuanced and more deep as I find out more about them.

DSH: In your sound piece, In Transit, Accompanied by Double Bass and Saxophone, 2022, we hear what seems to be a train running on a set of tracks, layered with a musical arrangement. Can you break down the significance of these sounds?

JC: Fort Worth is kind of this train hub because people were shipping livestock and all kinds of things from there. Also, within the blues, there’s this idea about trains and mobility—they gave people access. The rhythms of trains also made their way into blues music. It’s a great metaphor within our culture. 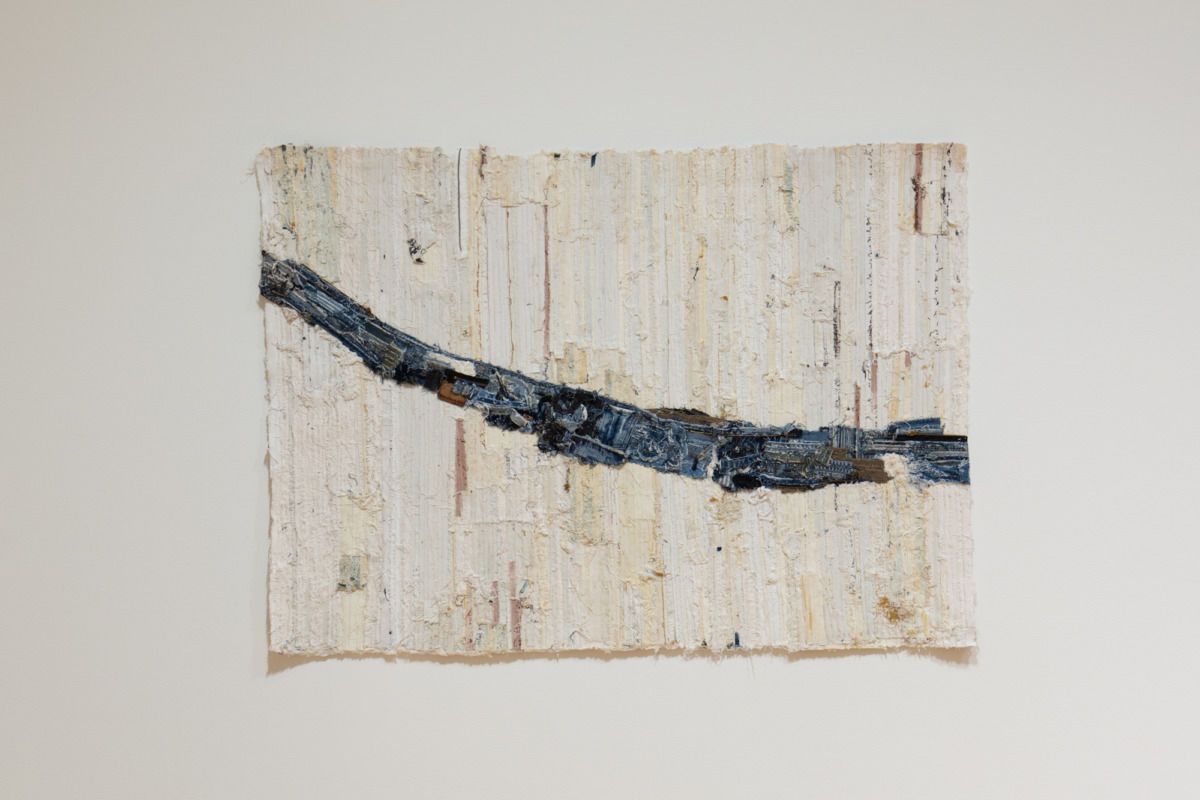 DSH: Horn Beam Effigy, 2022 seems to draw heavily on your reference to alluvial soil. Can you talk about the significance of using actual dirt as the holding space for this sculpture and what that represents?

JC: That’s dirt taken from the town where Blind Lemon Jefferson was from, which is about sixty miles from Fort Worth. I was really excited about doing a show in Fort Worth. There were all of these layers of music and history that I could tap into with those works. I tried to use materials that you would find in the train yard. The beam is actually a segment of railroad track. Then you have the dirt, the railroad ties, the denim, and the silver plated saxophone.

I was trying to create a type of sculpture referencing Charlie Parker with this kind of bird-like figure. He was really important to both Ornette Coleman and Julius Hemphill. I was trying to figure out a piece that could connect Parker to these two guys and how they would transform his music.
Jamal Cyrus FOCUS: Jamal Cyrus

A Brief Guide to the Wide, Wild World of Art Schools and Residencies