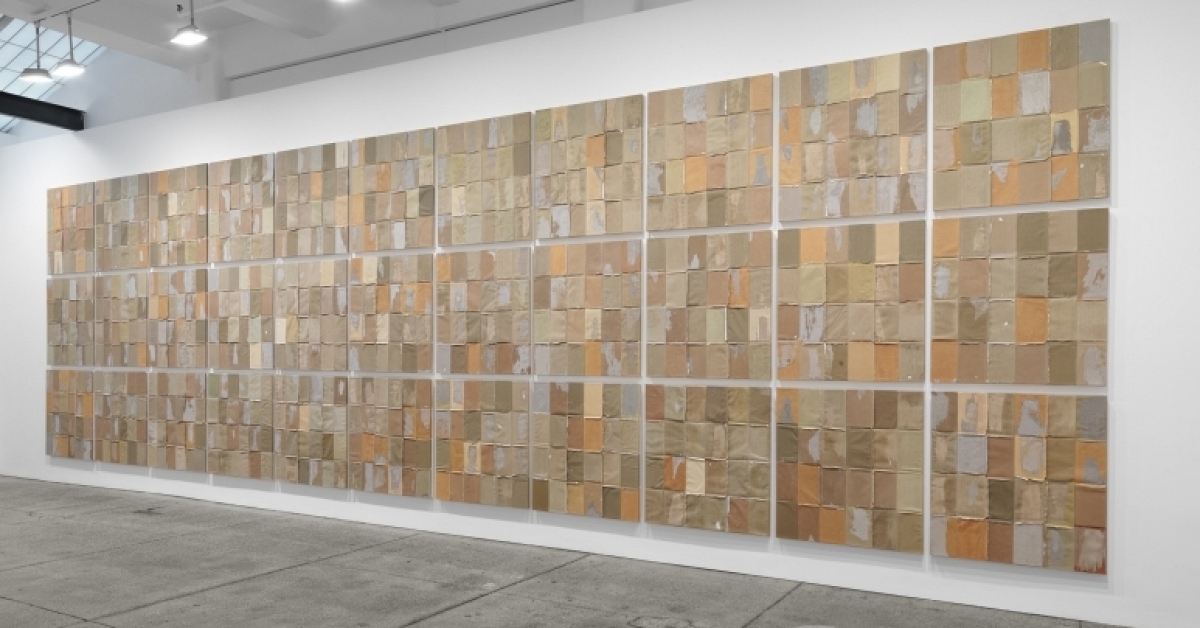 Through the abstraction of book covers into compelling compositions, Jones explores the disillusionment of the very systems the volumes represent. Several works are comprised of desecrated law books, articulating the artist’s resolute perspective on the flawed American justice system. One of the central works in the exhibition, Talk to Me (2015), is a monumental, multi-panel composition comprised of law books, whose scale and impact powerfully interrogates the justice system’s limitations for certain groups. Jones is not solely focused on the violent confrontations with the law that continue to make headlines, but rather the injustices that go unreported. Seeking out narratives of individuals overlooked by society and the media, Jones creates works that resemble quilts, a craft long associated with collaborative storytelling. The new painting Burning all illusion (2016) brings together several reference books of various colors and themes into a patchwork with loose threads and rough edges, prompting open-ended questions about the recorded and unrecorded histories of our collective experience.

Jones builds upon a movement within abstract painting that prioritizes formal investigations while also addressing social and cultural issues. Using a process that recalls radical forms of art that employ detritus and everyday found materials, Jones reveals the social discrimination at play in how value is assigned to different cultures and the objects that represent them.

Through his process of simultaneously preserving evidence of the texts through their bindings while erasing the content, Jones re-examines history and generates new perspectives from which to grapple with society’s ongoing ignorance and apathy.

Born in Marion, Indiana, Samuel Levi Jones now lives and works in Chicago, Illinois. Jones completed a private residency program in Northern California in summer of 2016, during which he produced new work for the exhibition from books deaccessioned by the Department of African American Studies at the University of California, Berkeley. Recent museum exhibitions include After Fred Wilson at the Indianapolis Museum of Contemporary Art and Unbound at the Studio Museum in Harlem, New York. His work is included in museum and public collections such as the San Francisco Museum of Modern Art; The Rubell Family Collection, Miami; Los Angeles County Museum of Art; and Studio Museum in Harlem, New York. In 2014, Jones was the recipient of the Joyce Alexander Wein Artist Prize, an annual award given to an emerging or mid-career African-American artist.

In conjunction with the exhibition, Galerie Lelong will hold an artist talk moderated by Sara Reisman, Artistic Director for The Shelley & Donald Rubin Foundation, on Saturday, December 10, 2-3:30pm.