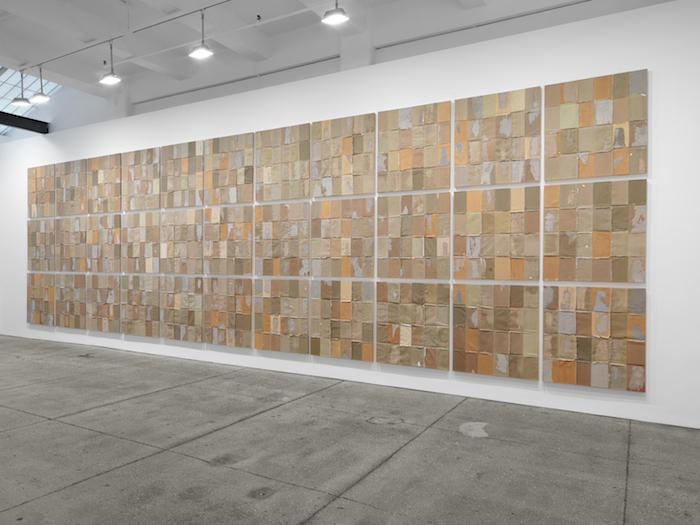 The bibliographic survey, Black Slavery In The Americas, is a two-volume collection of writings that detail slavery and its effects from 1860 through 1980. The artist Samuel Levi Jones, took the collection along with nearly a thousand other law books and encyclopedias detailing black life, and cut off the books’ casings to create a series of abstract books on canvas. The works, on view in a solo exhibition titled Burning all illusion at Galerie Lelong, is the artist’s way of questioning the collective understanding of black identity, American history, injustice, and the systems of power and knowledge the institutional texts represent.

“In the beginning, I was using only encyclopedias and the scale of a work was dependent upon the number of volumes within a set,” the artist tells The Creators Project. “Some of the titles come from music that resonates with me in the same way that the source material relates to the content.”

The titles are also a response to past events like lynching and state sanctioned brutality. “There is one title in particular that comes from a song and an event near to me,” says Jones. “The title is Poplar Trees, which was pulled from the song “Strange Fruit.” The song came from a poem written by Abel Meeropol in response to the lynching of two men on August 7, 1930 in my hometown of Marion, Indiana. The men were accused of a crime, detained, and held in the local jailhouse. Before any chance of due process, a mob pulled the men from the jailhouse and hung them from a tree on the lawn of the courthouse just a block away. One of the men was my great uncle.”

Selective Proof of Facts, a grid-like green and brown painting of deconstructed law books and African American reference books, speaks to the history of violence experienced by the African American community and Jones’ family. It’s a weathered work. The titles of the tomes have been removed as a gesture that captures the artist’s “response to a system that remains extremely unjust.” The artist strips the titles off of Blue Skies Matter and Burning all illusion too. The painting, Burning all illusion featured titles such as Bibliography of Black Music, Science Year from 1981, Yearbook of Higher Education, and The Book of Knowledge.

There are small gold words on the red painting, Joshua, that read, “Homicide,” “Assault,” “Criminal,” and “Officers and Public Employees.” The painting’s text alludes to the kinds of thinking that created institutions of justice that encode racially biased laws into the system and disproportionately punish the African American community. “This source material has been and is studied by individuals who partake in a system that claims it is just for all,” explains Jones. “If there is an impartial system of justice why are there increasing amounts of people demonstrating as a reaction to the decisions of figures in power?” 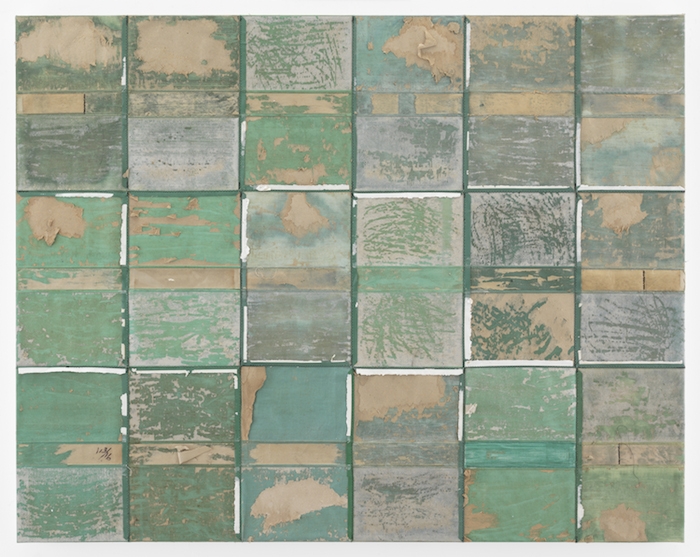 To create the book paintings Jones, who draws on abstract expression and modernism in constructing his grid-like paintings, takes an exacto knife and cuts off the front and back covers of the books. He then soaks the covers in water to soften them and removes the top layer of the covers— what the artist refers to as “skin”—and arranges the skins on canvas before applying paint. The gesture itself is a challenge to the relationship between knowledge and the truth, what the French philosopher Michel Foucault called knowledge-power. The philosopher argued that organized, institutionalized knowledge is power because it is taken as undisputed truth. 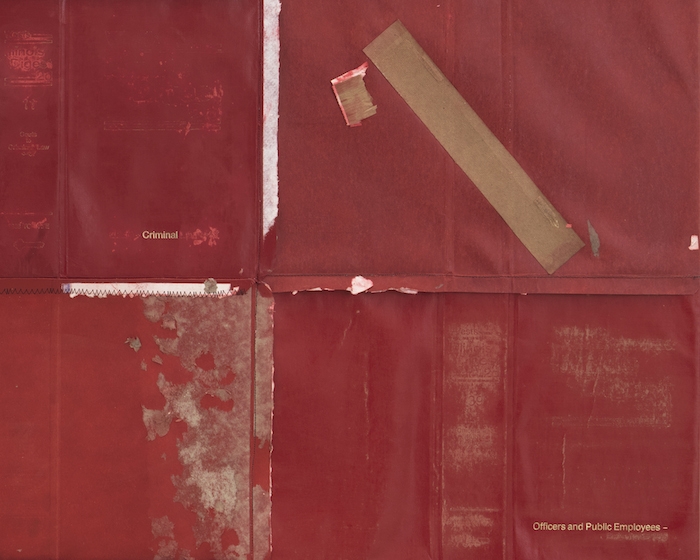 “Before I was a maker,” says the artist, “I was not as consumed with injustices. I think, like many, I allowed myself to be detached.” Jones explains, “All too often, we buy into the illusion that everything is alright. I do my best to remain hopeful that there is progress, and I try to find beauty within the chaos. It is my hope that we encourage one another to start with conversations, which then enable resistance to complacency.”