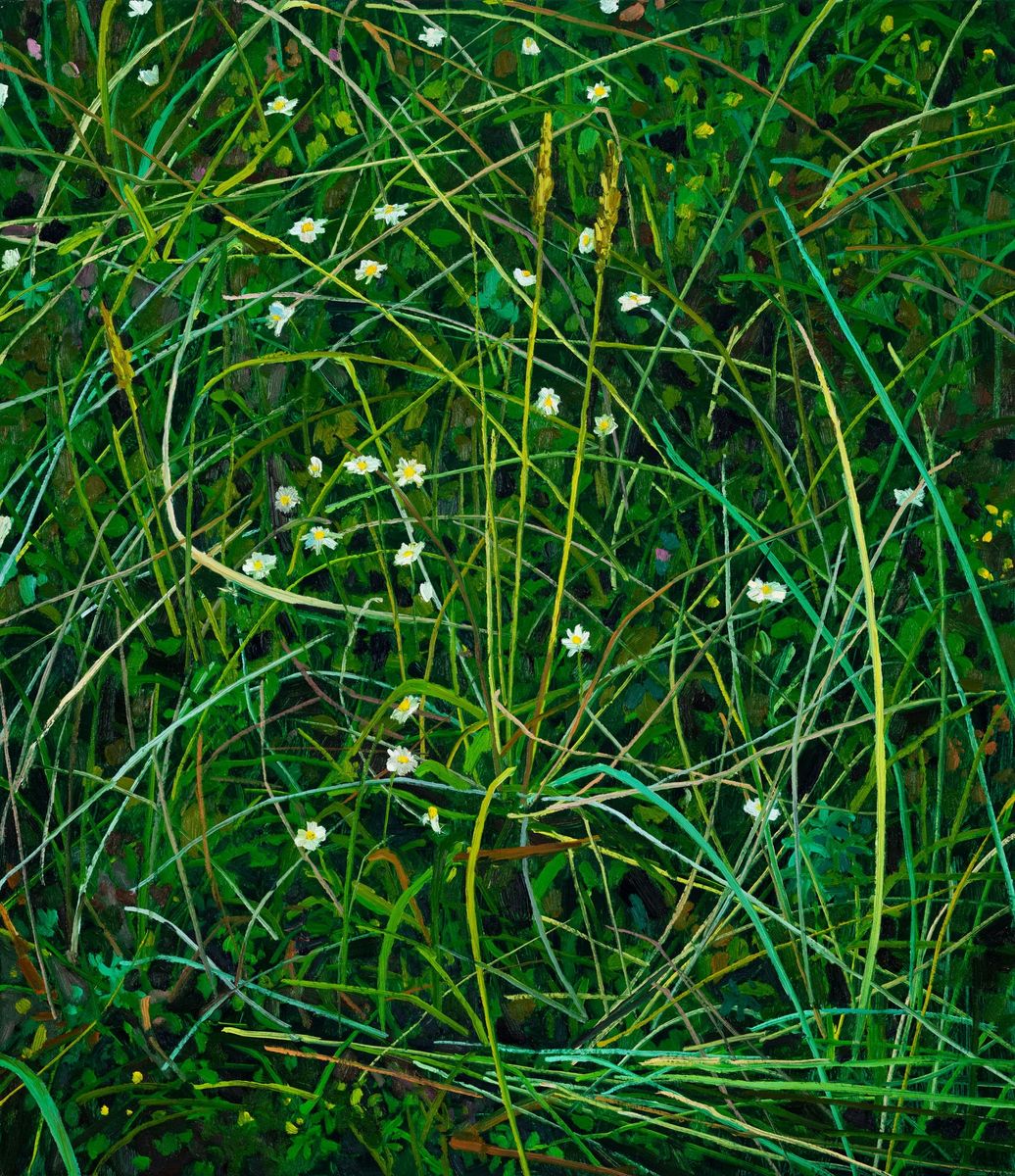 Claire Sherman entangles us in intimate and intricate landscapes: once we enter, we cannot escape. But this work is not about the dangers of nature. To the contrary, the paintings in this show, ranging from the delicate 30 by 26 Wildflowers (2020) to the room-filling (96 by 234) triptych Trees and Vines (2021), are intended as evidence of the harm human activities are inflicting on the global environment. But in depicting our pernicious intrusions, Sherman creates a paradox: how beautiful that damage appears! Is it a trick? Sherman brings to bear a richness of color and activity that almost seems to celebrate our meddling in the natural order, and this, as unlikely as it may seem, offers a note of optimism.

With us in tow, Sherman treks through the mountains of Northern California and Oregon, where she has hiked regularly over the course of eight years. Many of these places were consumed by forest fires in 2020 and 2021, so this is a visit to a ruined landscape. Wildflowers, we learn, are among the first plants to return after fires, and Sherman rigorously, even affectionately, depicts these plants, focusing on their delicacy and fragility—as well as on their natural artfulness. They seem to be shaping their environs as if by intention. She portrays a few horizontal and diagonal stems stretched out across the vertical growths in such a way that they appear to give structure to the undergrowth, actively guiding the viewer’s gaze.

The dense, dark concentrations of Sherman’s brambles leads us to focus tightly, tracing the paths of the vines dragging us along as wildflowers punctuate, illuminate, and underscore the rhythms of the brush. We can almost feel the scratchy twigs crunching beneath our feet where we might stumble, as we sense in the 60 by 54 inch oil painting Grass and Wildflowers (2020). But unlike in traditional landscape painting, Sherman leads us to no vanishing point: the landscape is the vanishing point, both of nature and ourselves.

It’s impossible to resist connecting Sherman’s expressive tones with the warm brownish-gold palette of the Hudson River School painters, but here it is condensed in the undergrowth. Curiously, in her distilled shades, we can perceive a glow similar to that of Frederic Church’s rust-colored skies. And we can detect in her technique an analogy with Church’s own painstakingly crafted terrains. But Sherman’s distinctive brushstrokes are very much her own—tactile, and remarkably dynamic. 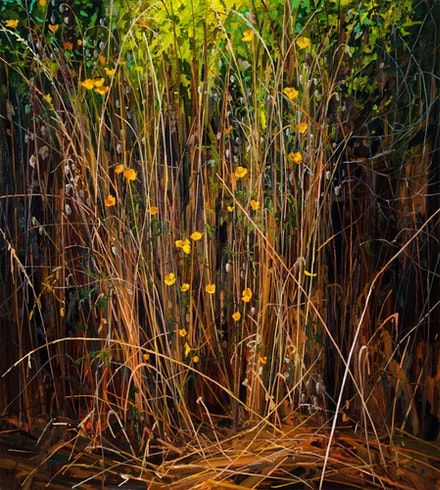 British critic John Ruskin, writing in his Modern Painters, points to the importance of close observation in Church’s work, claiming that “the imperative duty of the landscape painter [is] to descend to the lowest details with undiminished attention. Every class of rock, every kind of earth, every form of cloud, must be studied with equal industry, and rendered with equal precision.” It would seem that, like Church, Sherman fulfills that directive to great expressive effect.

Through accumulation and close attention to the specific, Sherman builds a landscape that is not only physical but psychological. Her work not only refines our powers of discernment, but also suggests analogies with our own vascular systems and as such helps us to sense the effects of our surrounding natural world.

At the same time, Sherman’s compositions evoke fairy tales and John Tenniel’s dramatic illustrations, at once threatening and inviting. She renders deep spaces and dares us to try to penetrate them. Taking the Alice in Wonderland route, we are left looking for the illusive rabbit in the woods. And, like the white rabbit, we don’t ever know whether we are too late, a sobering dilemma given the deteriorating state of our planet. Will we be too late for the garden party? Will there still be a garden, ask Sherman’s landscapes, let alone a party amid all the decay and destruction? And, even more importantly, will we be able to escape, however transfigured we are likely to become in the future? Will we have grown too large to ever emerge from the woods? Or simply too small to survive?
Claire Sherman Claire Sherman: Intour