A well-known scientist (some say it was Bertrand Russell) once gave a public lecture on astronomy. He described how the earth orbits around the sun and how the sun, in turn, orbits around the center of a vast collection of stars called our galaxy. At the end of the lecture, a little old lady at the back of the room got up and said: “What you have told us is rubbish. The world is really a flat plate supported on the back of a giant tortoise.”

The scientist gave a superior smile before replying, “What is the tortoise standing on?” 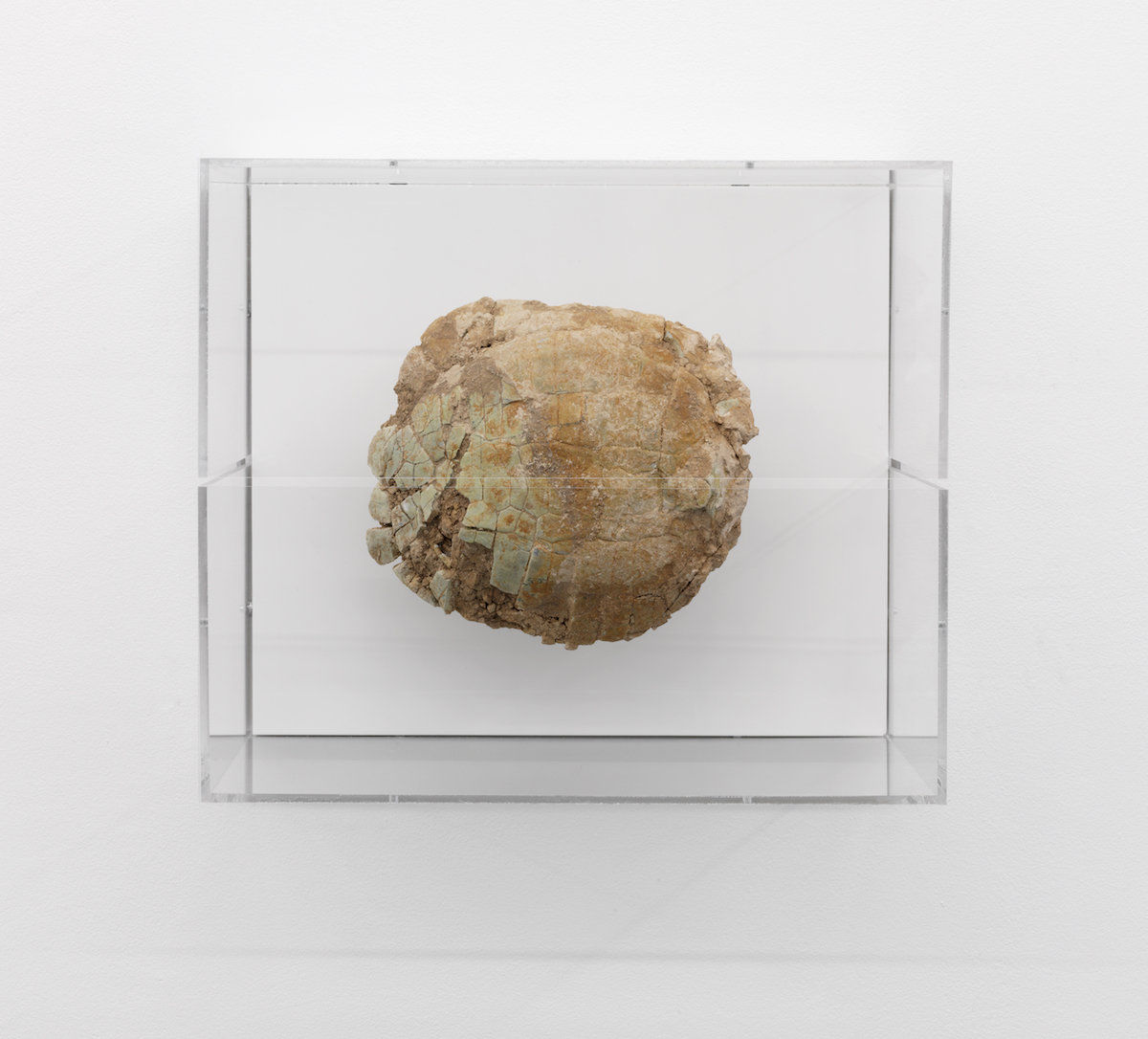 STEVEN L. BRIDGES: Looking ahead to your upcoming exhibition here at the Eli and Edythe Broad Art Museum (MSU Broad), I thought we could discuss your approach to art-making and some of the embedded references that I read in your work. I pulled the quote above from astrophysicist Stephen Hawking’s book A Brief History of Time in part for its reference to this ancient notion of the world resting upon a tortoise shell—a cosmological vision that can be found in many different cultures the world over—which represents the “infinite regress” problem one encounters when trying to pinpoint the origins of the universe. As part of the exhibition, you will present three sculptures that all incorporate roughly 30 million year old tortoise shells from the Oligocene era. How did you acquire these fossils and what drew you to them in the first place? Further, are you interested in the different cosmologies they embody, and, if so, to what end?

DANIEL G. BAIRD: The tortoise fossils were sourced from a fossil-hunter in the Badlands of South Dakota. This area’s unique geological formation exposes a rich and abundant fossil preserve where these objects from the past are close to the surface and accessible. Usually, the fossil remains are conserved into a polished state. It was important for me to acquire these objects in an unmodified, freshly excavated form to maintain the energy of their discovery.

I like this cosmological analogy of the world consisting of ‘turtles all the way down’ very much. What interests me in these objects is wholly tied to the mythological connotations these reptiles embody, namely, that the world is contained within their shell. And in the quote above I prefer to think of the horizontal plane as a metaphor for the present moment, persistently replacing itself as time moves forward.

Branching off of this notion of a horizon, or sedimentations of experience, I began to think of these objects photographically and how they stand as representations of the limits to what we have pursued through archaeology. At the moment of their death, these tortoises captured their world within and we now look at these objects in bewilderment and awe as embodiments of a time that is almost inconceivably distant and inaccessible to us. It is a silent archive without an experiential key.


SLB: At the MSU Broad, you will create a new, large-scale piece that is made from the casting of a cave wall—the largest of such casts you have ever made. Both the casting process as well as the way in which you plan to install the work recall the work of archaeologists. To make the work you travel to a particular site to make these casts, making the molds directly on the cave wall and then developing them further in the studio. This archaeological field work thus becomes an important part of your practice, and so I wonder how you came to work in this way.

DGB: The idea of archaeology in my work has been a consistent focus. Early on, I was creating sculptures referencing objects of technology that were physically distant to me as a means to connect with a concept of technological sublimity and a base human desire towards immortality. I think what could be said is that even in the future pursuits of technology and progress that I am interested in, I am trying to make manifest their inherent collapse and replacement by other systems. The term ‘future artifacts’ has been used to describe my work and I am very happy with this concise description. It alludes to a collapsing of time within an object and the works comprehension bound by performing a leap in thinking outside of one’s experience.

The works for MSU are a continuation of series begun a few years ago. The initial production occurs by making silicone replicas from actual cave walls, in the dark, with a headlamp, bats flying around my head and all. In sourcing these works, the process is one where I physically place the mold-making material onto the wall by hand resulting in a thin silicone layer that captures all the minute details of the wall. Finger impressions that make up the entire backside of the fragments remain as the remnants to a process of making. These indentations are instantly relatable as we all have had the experience of imprinting our hands into some malleable.

With each work, I’m seeking to create a moment in the viewer where time is encountered as an abstraction and the roots of what we’ve come to understand as the foundations of our progress are called into question or reconsidered.

SLB: Along with different cosmologies, your sculptures also seem to be influenced by different philosophical traditions. With reference to the casts of the cave wall, I am immediately reminded of the famous passage from the Greek philosopher Plato in his book Republic. The figure of Socrates relates the allegory to us, describing a group of prisoners who live in a cave and, because they know no other reality, misidentify the shadows cast on the wall as the real things they refer to—which, of course, they are not. Is this reference important to you, and does it offer any clues to the meaning and significance of your work?

DGB: In producing the cave works I hadn’t thought of the famous allegory from Plato but found myself referencing it when I spoke of those pieces. His idea of ‘forms’ I find very intriguing and I ran into a scenario where I had to confront them directly. I want to reference these cave rock formations as a type of tabula rasa of humanity’s representational creative origin. Since they are direct casts from real places, the origin of where they are sourced instantly develops a type of sacred aura.

The source of a large amount of these pieces comes from one cave in particular which is located in rural Iowa. It is simply a cave amongst a few others. It contains no petroglyphs, no ancient artifacts or any other additional element that would bestow a sacredness to its existence. I wanted to use a cave that didn’t have this added baggage of a pre-existing history because what I am interested in is the ‘cave’ as idea. The cave I reference, to me, stands in for all underground coverings that could potentially have housed or functioned like the caves of Lascaux or Chauvet. It is in this desire to represent ‘cave-ness’ that I ran into Plato’s ideas directly and unexpectedly. 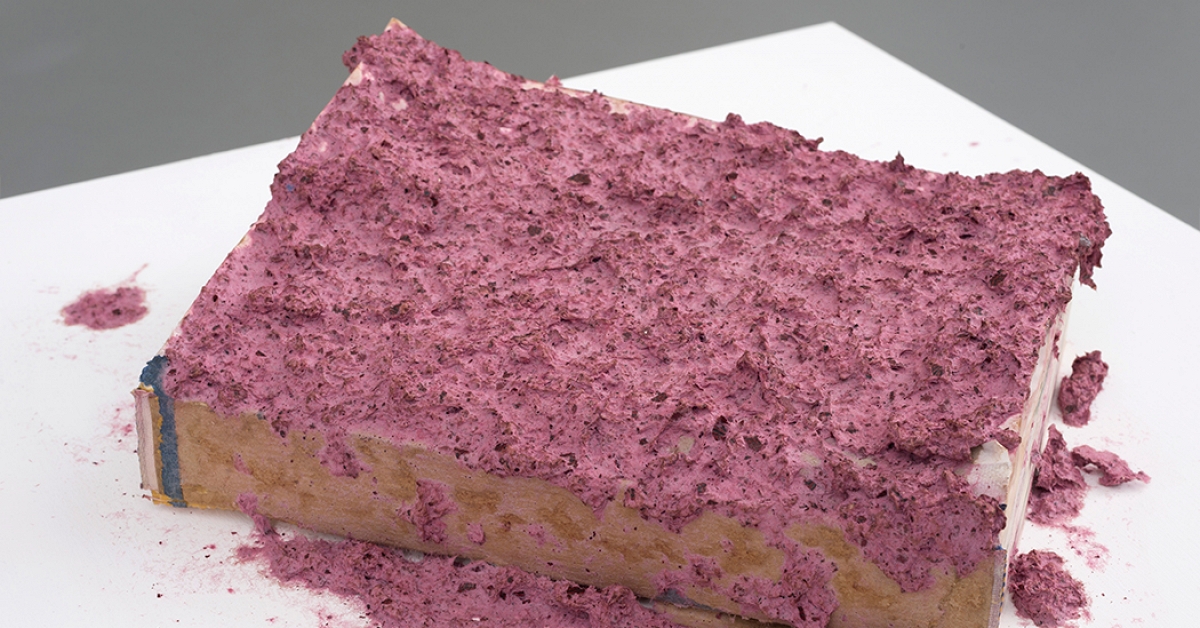 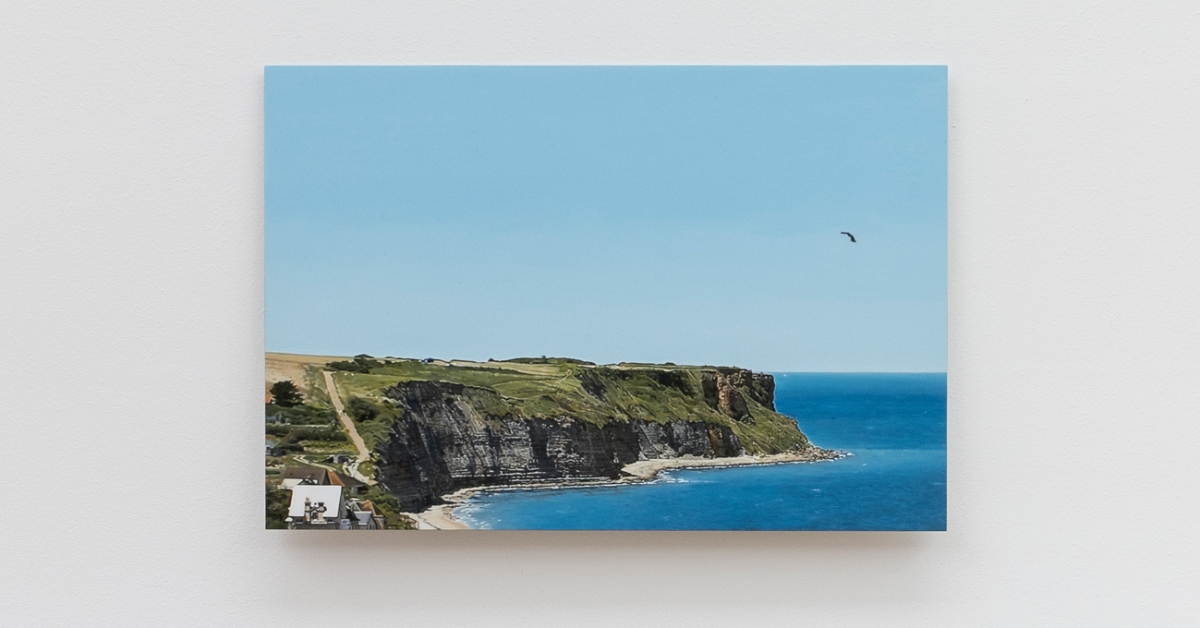 I Am a Lie and I am Gold